The game is over – boy it was a hard one. Some wonderful ideas, and no duplicates, which proves how creative you all are.

Linda from ColoradoFarmLife came close, but Scottie from ScottiesToyBox got it correct after reading her guesses, which proves how clever he is!

The pictures are of road dirt or mud on one of the white work vans. I thought it looked rather beautiful and strange. Then I realised that you really couldn’t tell what it was unless you knew, and took the second picture with a bit of tire showing to make it easier. 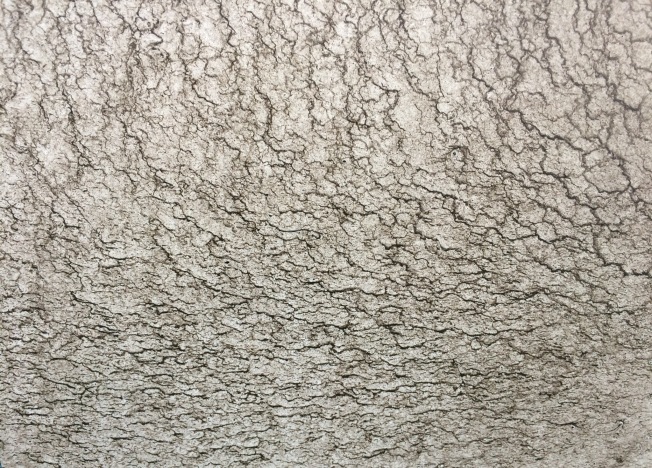 I must give credit to my hubby, who took one look and got it right instantly. He then tried to guess the make and model of van (which I at first thought he got wrong), and he got that right, too. Which proves we definitely belong together!

Scottie seems to have played along for the fun of it, but I did offer a prize, such as it is. My ulterior motive is to get myself back drawing, so I offered a digital drawing of whatever the winner wants. I won’t say that I’m terribly talented and there are a lot of things I probably can’t draw.

So, Scottie – please have a look at these old links to past posts, to get an idea of what I can and can’t do – then email me a photo to work from!

Clyde (with original photo, and not my best effort. He was HARD)

Ivy & Stewie (my favourite)
There are more, but I’m getting bored with links. If you want to waste a lot of time, go to my main page and scroll down to Catergories, Brushes.

Hope to take another mystery shot soon so we can play again!

This picture might help figure it out. I waited until after Monday as some people only read blogs in digest form, once a week. No new takers, so here we go.

Let me know, if you do guess – would you like a digital drawing?

I took this picture at work Monday.

Can you guess what it is? If no one guesses, I have one more picture with a bit of a hint in it. No hints from me, this post!

I wish I had something to offer as a prize, as I know this is a hard one. Maybe a Brushes drawing of a photo you want rendered into amateur digital art?

Ready to find out what the weird Creepy? photo was of?

Maybe this will help!

Yes, nothing more than a random bird-splotch on my car’s windscreen.

I saw an alien skull, maybe partially rotten or damaged, with one eye melted or broken and tentacles instead of teeth. I do tend toward the dark side.

A few of you also saw skulls, spiders, and the dark side. Welcome, evil ones!

I think Sled got nearest to guessing what it actually was with her comment of ‘A gluey fingerprint on a window.’ So very close!

I had several people guess it was a swarm of critters in the distance. Not bad! But it does prove that what your eyes see isn’t anything like reality. Points for seeing something organic, though – that is correct!

Imagination does take over: my favourite for sheer creavitivy was JustMe’s:  a steampunk airship. Wow. I love it.

Steve saw something I still cannot imagine – a woman with a ponytail. Anyone else see that?

Grannymar had several good ones: a parachuting skydiver, or a helmet, or an airborne plastic bag. Lots of thought went into her ideas!

A Potter-esqe Dementor was NotAPunkRocker’s vision. I actually think this is most likely, even if untrue.

Phil gets the most humouous award, however! ‘Alien Jellyfish! (searching for peanut butter chips in order to be complete)’

Her comment actually makes me think of the Portugese Man o’ War, which it does resemble!