Some of you are, anyway. Not here! But it’s a good excuse for me to do a post on hot red or orange blooms.

And an orange variety, maybe montbretia? Had it for years but this is the first time it honoured us with flowers.

Rudbeckia! Comes back every year so far.

The thing that isn’t rudbeckia. Something with a G? Man I’m terrible. Grown from seed a few years ago now, it also come back.

A new one this year! This time I haven’t a clue due to a packaging mis-label, because this is NOT gladiolus callianthus. Oh well. 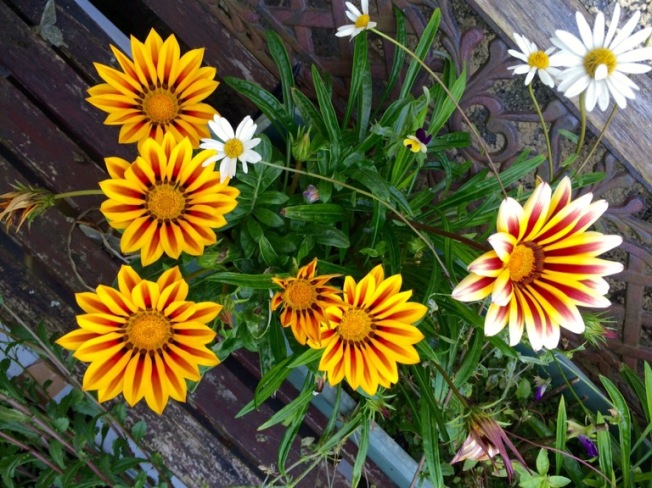 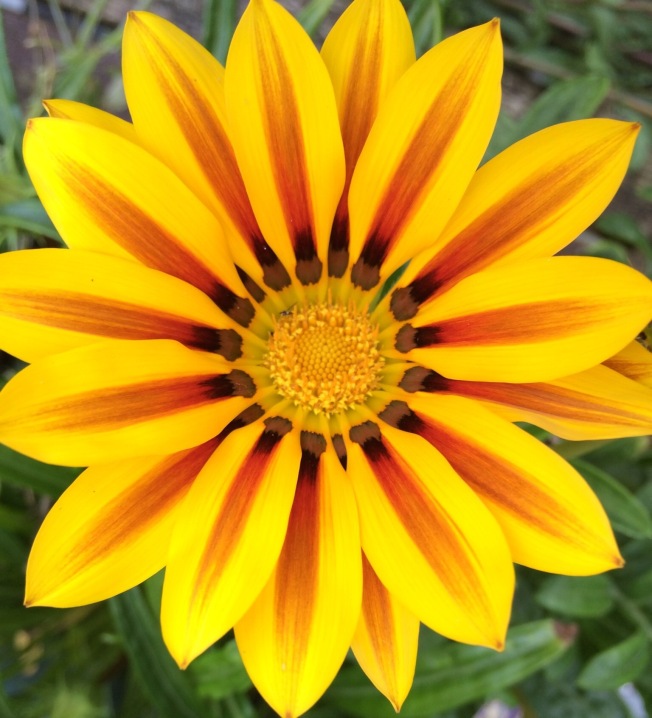 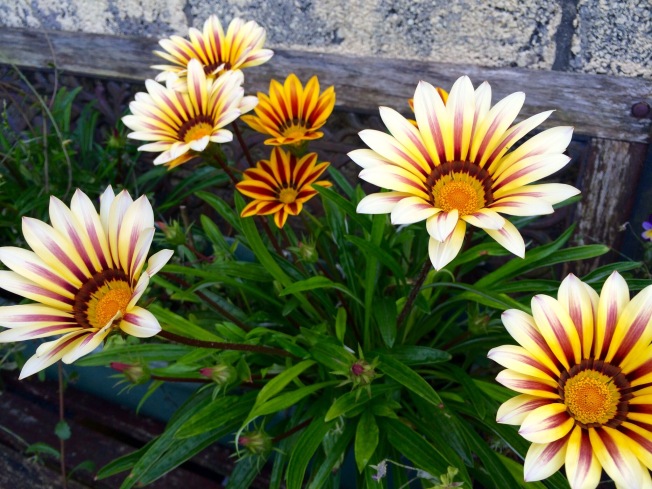 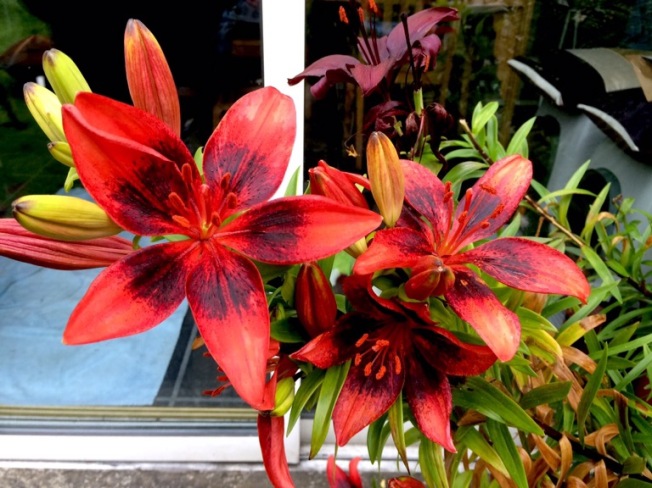 Red and black lilies, more of Aldi’s pixels mix. I should be the Aldi bulb spokesperson!

It was gorgeous today. Sunny and about 8 degrees C, which feels warm to me at this time of year. In the last two months – officially winter here – we’ve had one day of sleet and hail, and about three so far where it got near to zero and there was frost on the car, and the grass. The wind barely made its usual horrendously damaging appearance in late October, and November has been equally placid.

Of course the rain never really goes away, it is Ireland, after all.

Last weekend it was also lovely, so I borrowed iDJ’s iPhone to take pictures of my remaining flowers.

The rudbeckia is still going strong. I am so impressed with how long one bloom can survive. They are very welcome; now more than ever with their warm autumn coloration.

Galliardia is still in bloom, too.

I’m fascinated with their huge puff-ball seed heads, too. I’m leaving them to mature, just out of curiosity.

Now. This is something that really fascinates me! This is the stem of just one of the many black lilies that I grew this year. This one plant has not only made seeds, but seems to be growing bulblets all along its stem. I’m boggled. I think it is quite possible my garden next year is going to be overrun with black lilies. We may just have to dig up the whole front lawn (no great loss) and plant it with lilies and tigridia. I have no photos of them, but I have hundreds of tigridia seeds. Anyone in Europe want to have a go at growing them from seed? I’ll post them to ye.

The strawberry / raspberry patch is looking distinctly autumnal, and dammed ugly to boot.

One of my blueberry bushes always has incredible colour for fall. And it takes fall to heart: leaves everywhere.

I don’t know much about lavender. I grew these from seed last spring because I was told it was hard, and I love a challenge. They are blooming now, is that normal?

I had an absolutely terrible time trying to get the phone to focus on the lavender blooms. Oh well.

Some real colour to finish off with! The violas, a first for me this year. I expected tiny wee plants that were good as a border around another lavender plant. Instead they got nearly 2 foot tall, choked the lavender to death, and seeded everywhere when I wasn’t looking. As they are still beautifully in bloom, I can’t complain. Those little cat-whisker faces just make me smile.

I still have flowers! Lots of them! I think it is quite appropriate that my late-autumn blooms are lovely autumn colours, too.

Would you like to play a game? Two of these shots were taken on iDJ’s iPhone 4s (by himself) the rest on my iPhone 3s (by me). Which two? 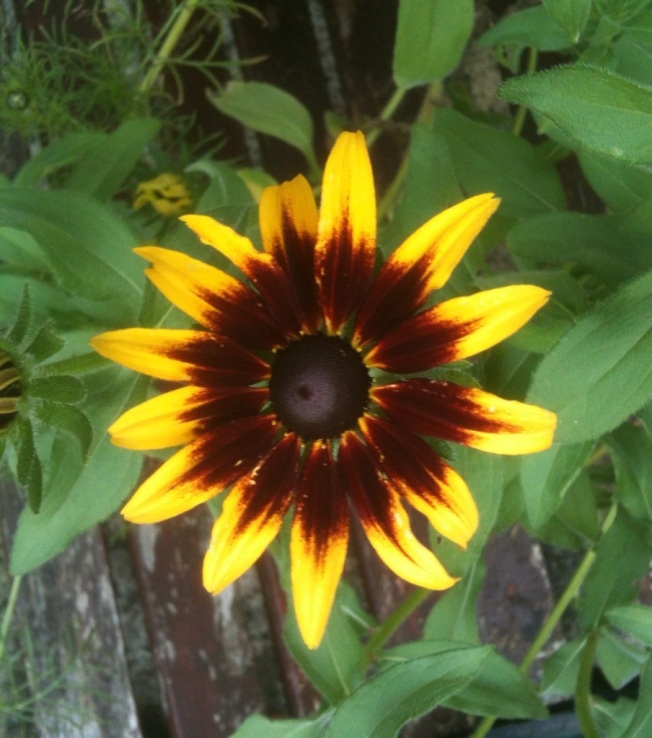 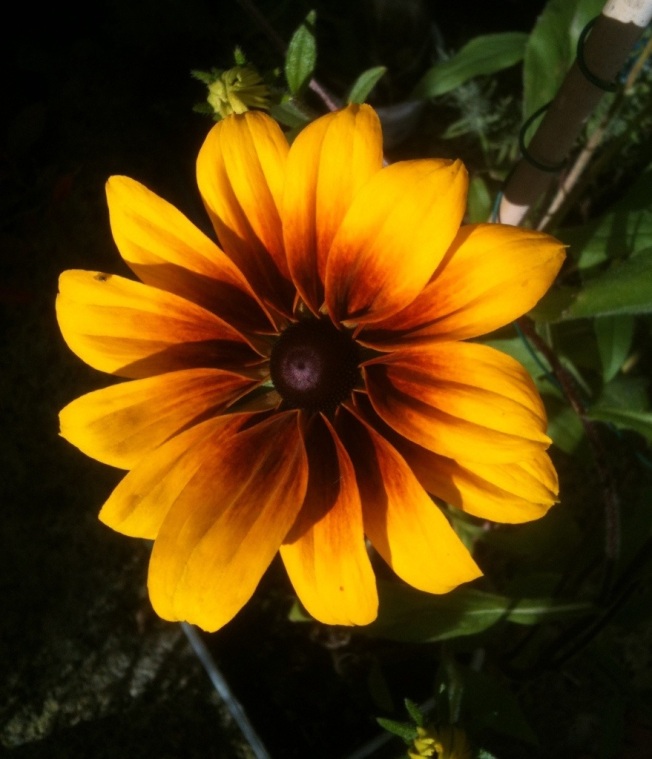 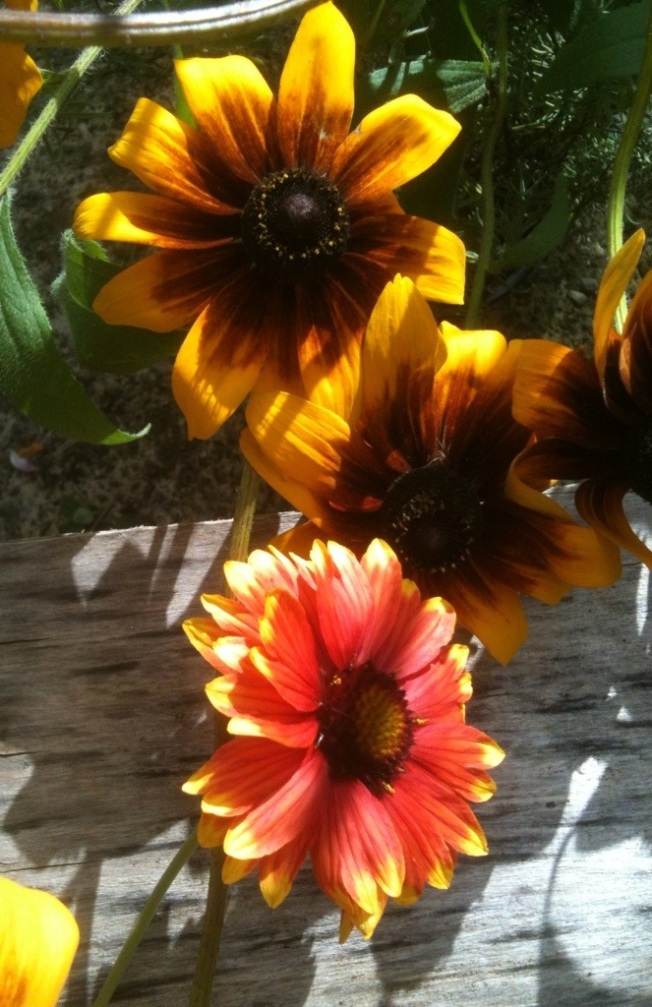 A bloom size comparison between the Galliardia and the rudbeckia.

What is possibly going to be my last sunflower of the year. We will see, the first plant had buds all the way down the stem. 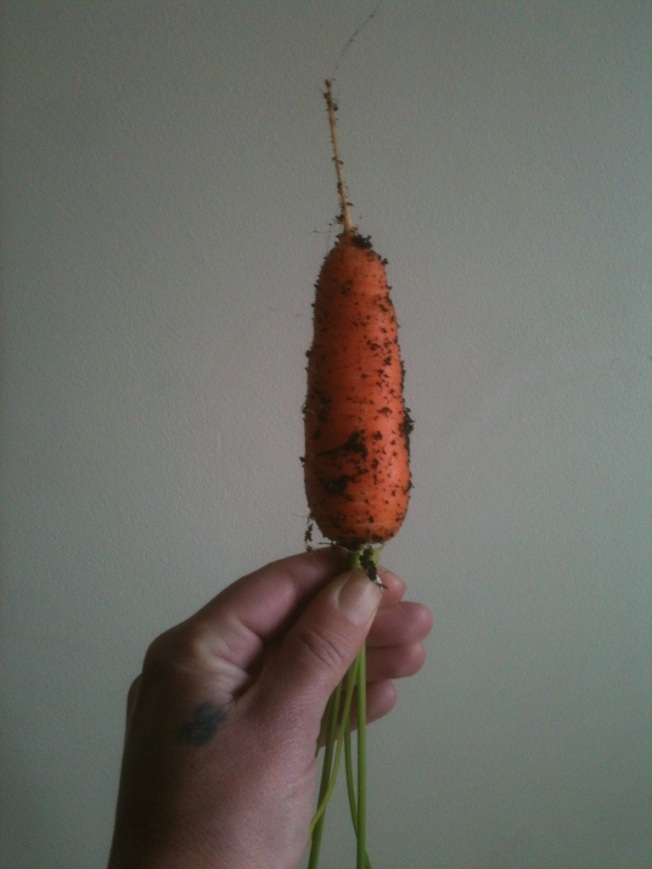 There’s the goddamn carrot pic I was looking for! Yummy 🙂 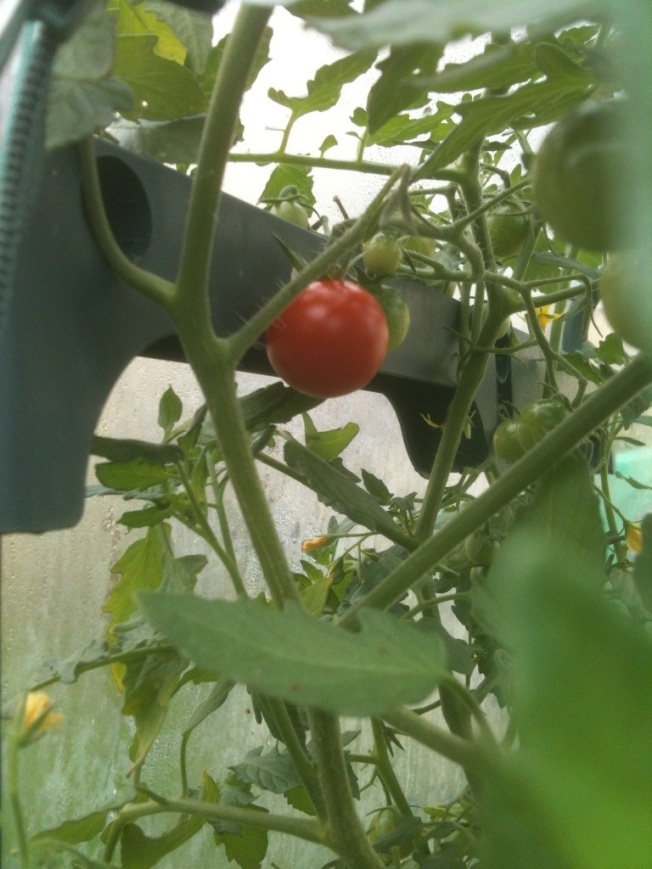 And that first tasty ‘mater! 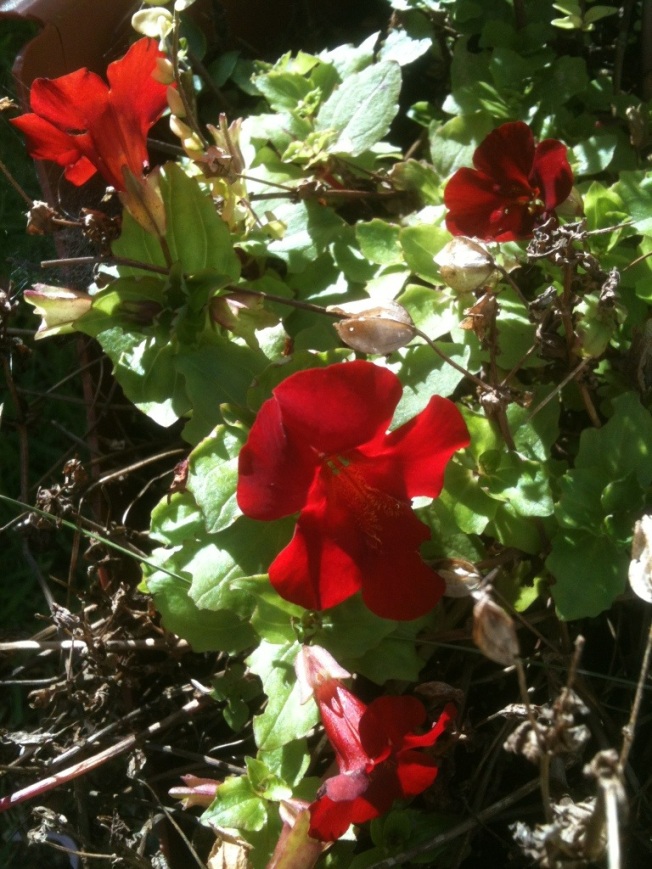 These things are still going, the former mystery plant now identified as Mimulus.

Just to be contrary, my last photo isn’t shades of orange and red, but of a pink Tigrida – yes, these are still blooming, too! Not as prolific these days, but I’m well impressed with these guys.

Pssst. Hey. C’mere. I gots sommat you might like to see! Shhh, not so loud! You wanna bring the heat down on us? These are young ones, spread for your pleasure! Not even a year old!

Ewww, I just made myself a bit sick with that, sorry. A joke too far, clearly! I think it was the use of ‘spread’ that was too much. But open, or ripe, or fertile would have been just as bad…

In any case, I have more plant pictures. And yes, they are mostly of their sexual organs: usually called flowers by sane people. Plants just have much, much more attractive ‘bits’ than mammals do. I own a mirror, and know how to use Google. Trust me, the plants are way better at ‘pretty.’

And it’s a good thing, as evidenced by the plethora of bees I’ve had this weekend. I was so glad to have them back – I’ve not seen any since spring. They aren’t impressed with the rudbeckia, it being a northern American plant, but they love the lobelia and the devil’s-bit scabious I dug out of the ground by the railway tracks two years ago.

Rudbeckia! As I’ve said, I’ve never grown this before. As predicted, hubby loves it! I also didn’t realise it is the ‘black-eyed-Susan’ I’ve heard of all my life. I also didn’t know there’s like a bazillion varieties. Most of mine look like the above, but some look like this: 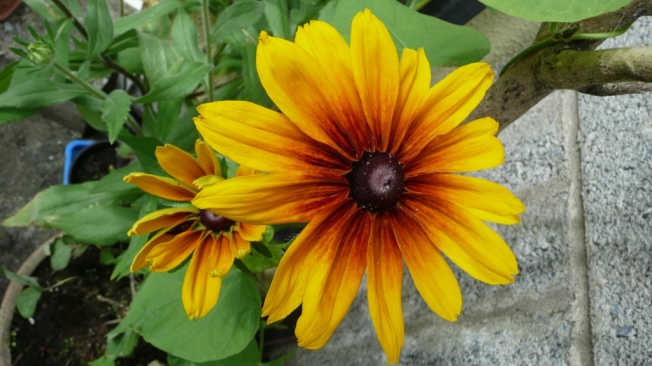 I’m happy with them! The blooms last weeks, yay! And they are sure to last after the rest of my babies die off from chill and wind.

My white and purple calla lilies – they only seem get started just when the afore-mentioned wind and rain sets in.

I’m not too upset about the lack of flowers, the spotted foliage is amazing. Like the skin of a salamander or an alien being.

Speaking of aliens, this is a macro shot of the finished cosmos flowers I snipped off, to encourage more blooms. I was going to compost this, until the shiny, waxy surface caught my eye and made me look closer. Doesn’t look real, does it? Too perfect, too veiny, and too strange. The seed heads are only about the size of a thumbnail. Neat!

This is why I have trouble trimming plants. Deadheading feels like beheading when I find such unexpected glories.

This is the one surviving raspberry plant, grown from seed this year. It’s teeny-tiny, but it was so tiny up until now I couldn’t even take a pic. The other five plants didn’t make it. I learned that berry seeds need high heat for a while before they will germinate. About the same amount of heat they’d get passing through an animal’s digestive tract. Duh! That’s a trial-and error education, by the way.
Please ignore the moss growing on my soil.

Lastly, my hot mess of flowers. This pic is the only reason I started this post – last weekend! You might recall this planter from a previous post, when I’d nearly forgotten what was in it. My how they’ve grown, despite taking a header off the kitchen windowsill two days after that post! I had to move them to the ugly location here (maybe next year we’ll paint that wall. I wanted to do a mural – maybe a beach scene). There’s a coleus from seed in that shot too – two years old, I overwintered it indoors and it was fine.

Right, this has been the most labour-intensive post ever. I couldn’t get the photos right. Too big or too small, in the wrong place, or adding in a hyperlink I never asked for. I give up! Yes, of course I have more pics…