In keeping with the last post with a musical title. 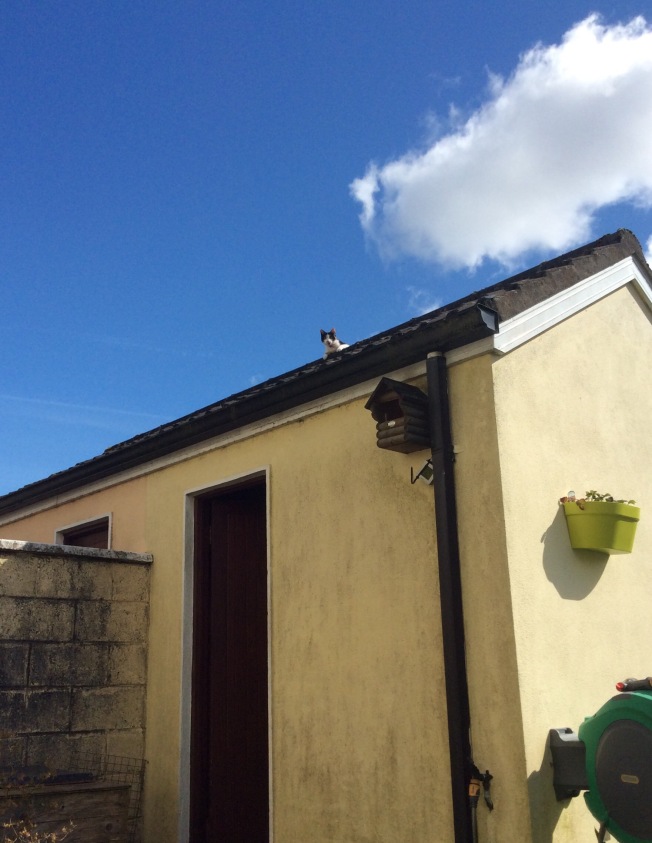 Our next door neighbors have started to let their cat outside. She is spayed, and has a bell on her collar – both good things!

But man, she sure pisses my Spottie-Cat off! The dog doesn’t know what to think. Chase? Not chase? She usually picks ‘whining in just that high-pitched-note that makes Spiders want to scream.’

If you aren’t a big spoiled dog.

I have a new phone! Well, not ‘new,’ exactly. iDJ has a new iPhone, the 5s. I, as per usual, inherit the old phone, in this case the iPhone 4s. He got the new one as an upgrade, so no extra expense – except for having to get a new SIM card for my phone.

Why should you care? Because now I will have a Much Better camera – with a flash – with me at all times. Oh, you mean it makes phone calls too? Oh, okay…

My first flash-photog experiments took place last night. Lokii was on my lap enjoying the fire with me, and I’ve never been able to get a me-eye-view before because it is just too dark. 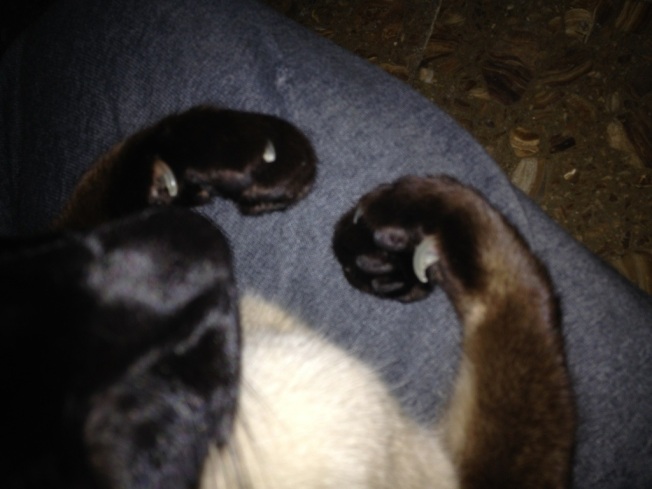 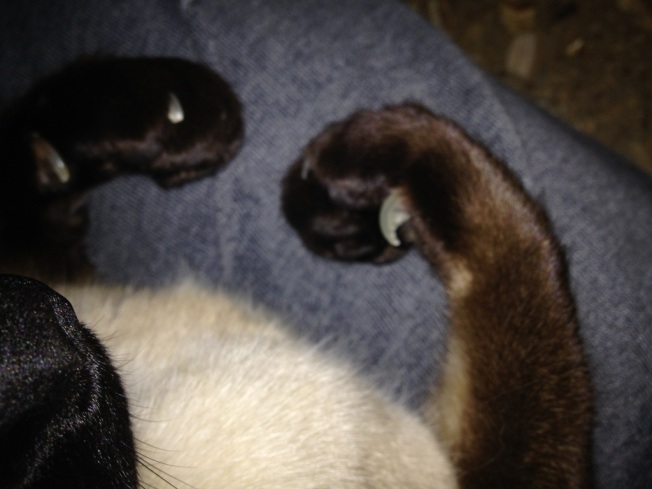 Uuurghhh! Why is it focussing on his nose? I know it’s a huge nose and all, but please let’s not give him a complex.

Oh well. I guess I will figure it out eventually. It is still an amazing photo of a perfectly-black Siamese nose. Now you see why it is so hard to get a pic of his face. And his nails – well, I trimmed them by feel last weekend, that’s why some are long and some are not.

Hubby took this one. My place on the couch is further over, so all I could see was the tips of her toes as she held on to the table. I asked him to take a shot so I could see everything (I couldn’t get up as I am the cat-repository). Yes, I need to trim her nails, too. Please feel free to peruse my media collection, or ask about the most amazing guitar ever.

We hunted down, trapped and bagged our tree today. It is really clean, compared to the ones we got the last two years. But. The cats think it smells funny in one place. I took this one…

And now we get to see the 5s in action. Dammit.

Lokii looks so weird in this one! Ears back, stocky body hunched up. He’s on his hind legs here, but clearly he isn’t as good at the meerkat pose as Spottie is. 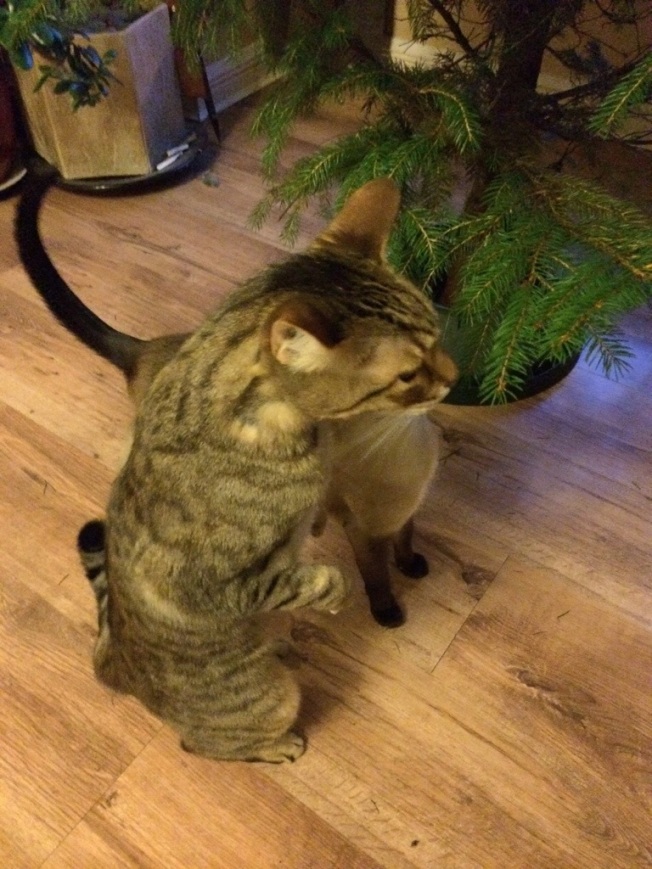 Here is a good pic of the bald patch Spot has developed. I think it is a reaction to the new wet food, because he’s had acne and other strange reactions to new things in the past (he was allergic to Lokii for ages, how bizarre is that). The fur is coming back in quite fast, so I don’t think he needs a vet visit again.

Had a slight panic earlier this evening. iDJ was running the BBQ, so I didn’t have much to do but shuttle plates, when needed. I had sunshine for a bit so was out front soaking it in, but when the sun set behind the mountain, I moved to the back yard to be with hubby, his beloved Weber grill, his music, and the very annoying dog.

The last is actually the most annoying factor. She’s an indoor dog, really only outside to do her business in the tiny-ass garden, and for walkies. As such, she’s never unsupervised. But she doesn’t really want to be outside – not unless daddy is outside too. I am not her favourite human, probably because my hands are not made of treats.

The food was nearly done, and I had one eye on the dog who was snuffling around my strawberry / raspberry patch. Hubby and I got talking and I noticed that Neko was near to us and still snuffling. Then she wandered away, and I spotted that something was missing.

There had been a little group of mushrooms in the grass, and now they were gone.

Our food is cooked and getting drier by the minute, but we both rush to do what we can: me to find my fungi identification and Irish Wildlife books, and hubby to scour the back garden with a flashlight, tongs, and plastic bag for evidence collection. He also did Internet research to see what signs of trouble we should look for.

Neko seems perfectly fine. She ate normally, she’s sleeping normally, and I hear no sounds of intestinal distress (a sign we know well, with her). The thing is: this damn dog loves veggies. Carrots are her favourite treat. Radishes? NOM! The ends of celery, the trimmings of courgette (zucchini!), the rind of a watermelon? Yes, please, and thank you!

So, it really should have occurred to us that she might go grazing in our back garden. It has: but only to the point where we didn’t want her to realise that blueberries are awesome. Or raspberries. She’s already figured out tomatoes, dammit. We never thought she’d realise fungi could be edible…

Not sure if she’s dammed stupid, or dammed smart.

I had a bit of playtime with her, with the intention of sussing out her mental state.

She always splays her forelegs out like that, and yes, she always looks that pleadingly pathetic. No wonder hubby is the big sucker of the family.

That just does not look comfortable, mushroom-highor not.

Right, so – iDJ and I just had a serious conversation about getting the dog ‘fixed’.

She’s my first female dog, and I did NOT expect a dog’s heat to be so disgusting. She bleeds everywhere for two weeks. It’s horrible. Luckily we have no carpet, so clean up isn’t too hard – if I could be bothered to do it. Last time she was in heat, I found blood spattered all over the lower half of the front door. Two weeks after she was all done. Ew, ew, ewwwww. There’s only so much a Magic Sponge can do, you know? And putting her in his old ratty boxers, with her tail out of the flies, just means we have to change her undies a few times a day and chase her around to put them back on when she slips out of them. 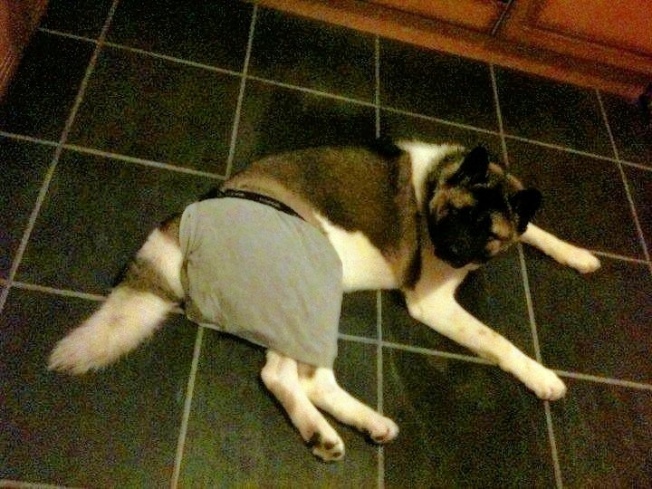 Oh yes, sooo great for everyone! Now, fair play to Neeks, she does not mind wearing people clothes at all, and never fights this indignity. But she sneaks out of her dog-jocks in her sleep, or when waiting for one of us to come home, or…okay, all the time. But she doesn’t do it on purpose at least.

See…it’s bad to leave her ‘broken,’ aka unfixed. She can get an infection from repeated heats without pregnancy. I don’t want to risk that, and we’ve risked it too long as we’ve been too broke to fix what’s broke.

Since I got a pay rise at work a few months ago, we’ve recovered a tiny bit and first on my list once we got some ‘wiggle room’ is to get Herself spayed.

And now it seems it’s a plan. 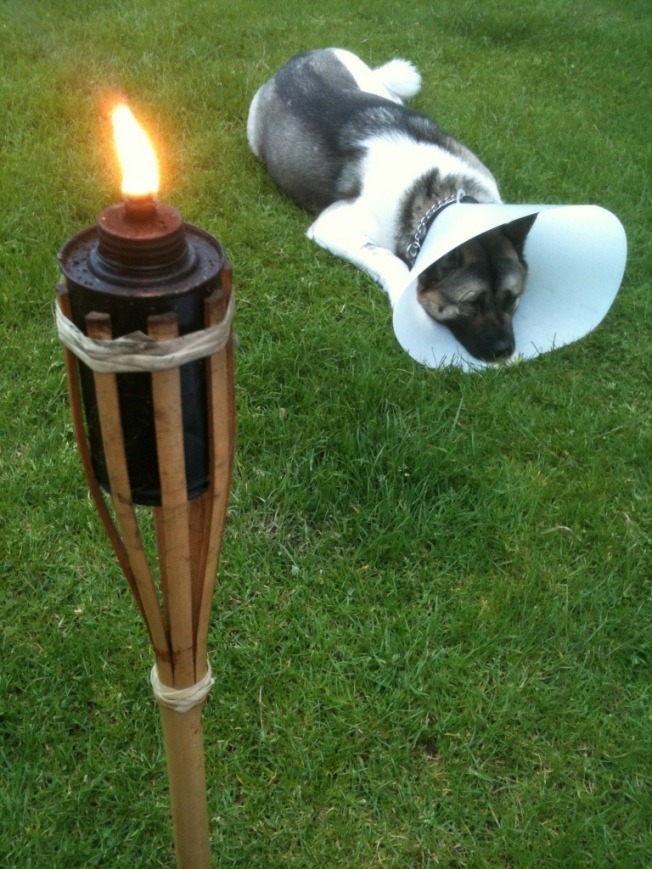 A short post tonight. I’m tired and hurting, and I think I’m going to put down the iPad, lie down n the couch and turn on the TV.

But, I have a couple of cute pics so here I am for a moment!

I cut Neko’s toenails today, in preparation for giving her a bath. I didn’t want her slipping more than necessary in the tub. She’s very good with the nail trimming, even if I have to do her back feet the same way you clean a horse’s hoof: she and I stand butt-to-butt and I hold her paw between my knees to do the cutting. It’s just easier with such a big dog. Those years working on the horse farm came in use!

Then, the bath. She usually gets a little scared when we make her go in the bathroom – it’s small – but this time no issue AND she got in the tub all by herself! A real first, and in all my years of having big dogs I think it might be the first time I’ve ever had a dog volunteer to get in the tub. Good girl!

Afterward we played in the grass for a bit, to dry off.

Note the four bath towels in the grass! And, of course, the rubber chicken. Yes, I buy dog toys that amuse ME. 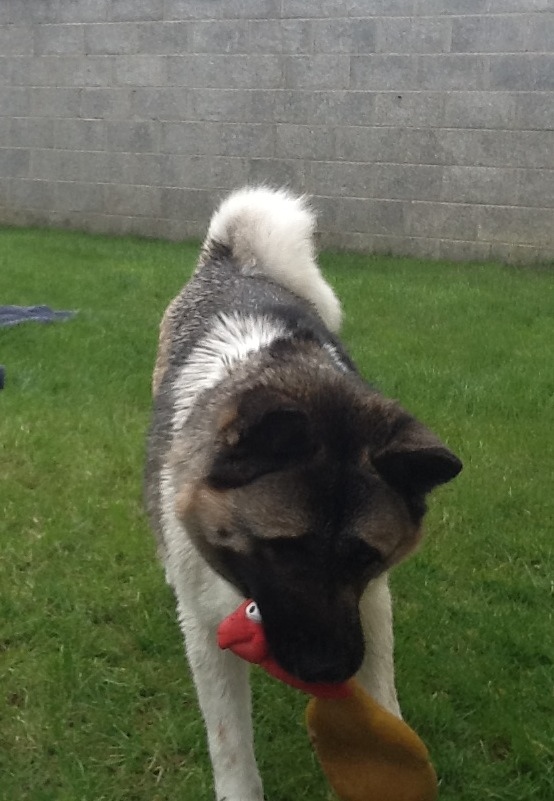