Its been an off year for me, with the planting. I started off really early on my veggies, in hopes that they actually do something this year. Mostly I ended up with a lot of dead seedlings for my efforts.

Then, I was late with starting flowers from seed. Ugh! Most of my new babies are just tiny things, or didn’t bother themselves to grow at all. Luckily, I have a good few that over wintered just fine and have been shouting to the sun their joy at being alive.

My Sweet William from seed, now in year three and showing no signs of stopping.

I might have to stop it myself by deadheading – damn stuff self-seeded all over the place and is smothering one of my blueberry bushes (in a pot).

Not from seed: clematis! Year two for this plant, and sadly it’s hard to see the blooms as it is growing up the grey willow tree and gets buried in the leaves. I took the fist pic with my iPhone – second one was iDJ’s work but I have no idea what he used. His is more true to life colour, but I like mine better because I couldn’t even see the bloom, it was over my head and horizontal so I clicked and hoped for a result. Woot! 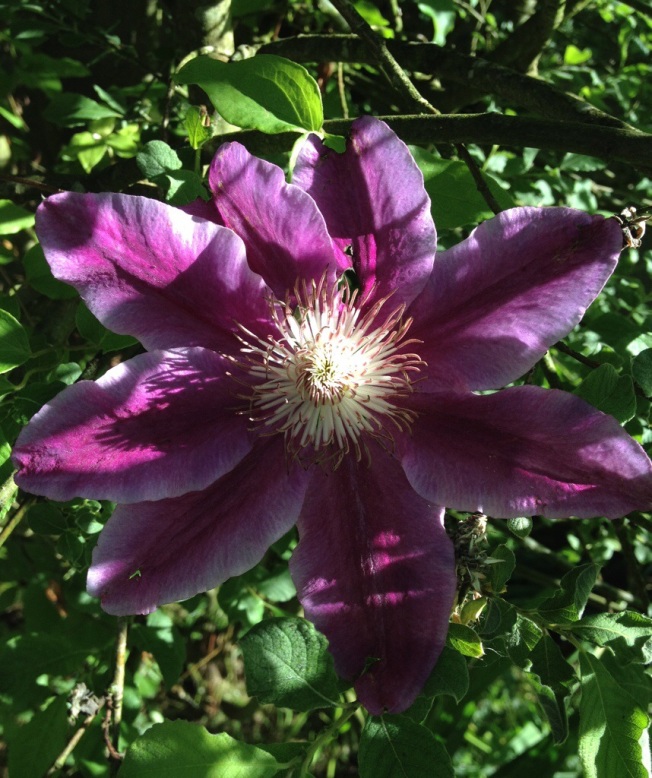 Also not from seed, unless it seeded itself – native Irish yellow iris. Most people here would not have this in their garden, it’s rather invasive and weed-like. Don’t care: love it. 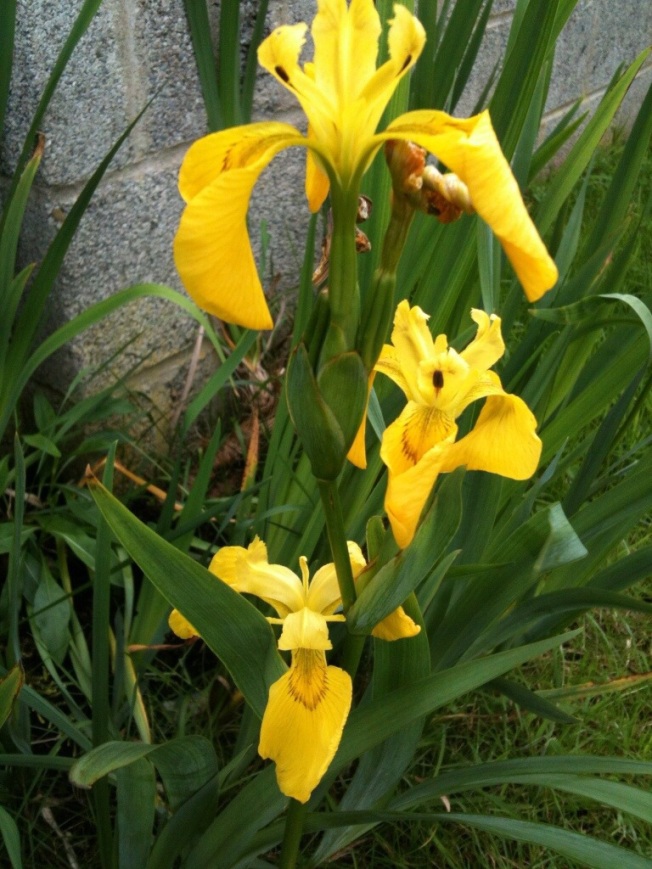 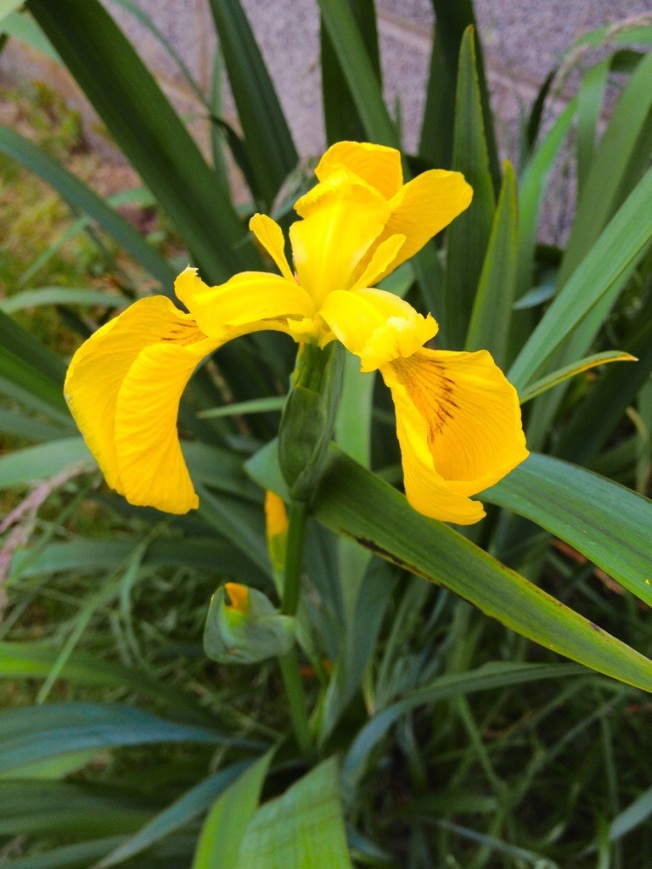 Yet another not from seed! I hopped a wall and stole this from the terribly unloved landscaping at the business next door to mine. Seriously, it’s all weeds and horsetails over there. Except for these zinnia! They are very large, 4in or 10cm across. I’d hoped these were Gerbera daisies when I stole them. But I’m not displeased. I’m sure they will love it here!

Roses roses roses… Nothing out of my favourite lavender rose yet: something snapped off the early spring growth and it is only just considering blooming now. But the massive white roses are taking over, the candy-floss pink ones are exuberant, and the darker pink ones are just deciding this is a good year. 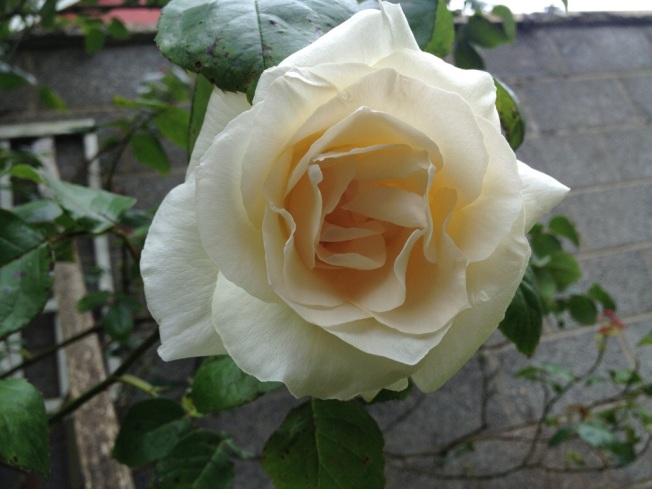 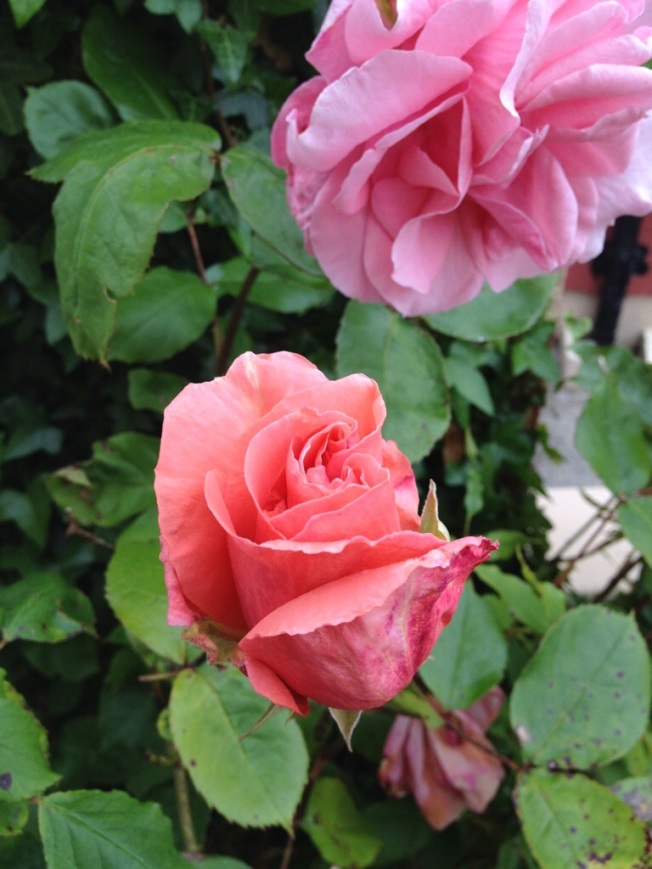 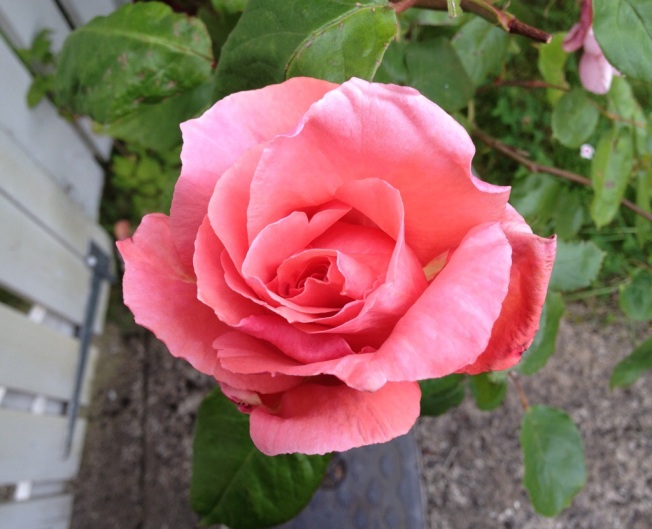 Galliardia from seed last year, survived our mild winter but is slow to start. The rudbeckia is all leaf still – but one of those plants is now three years old, too! 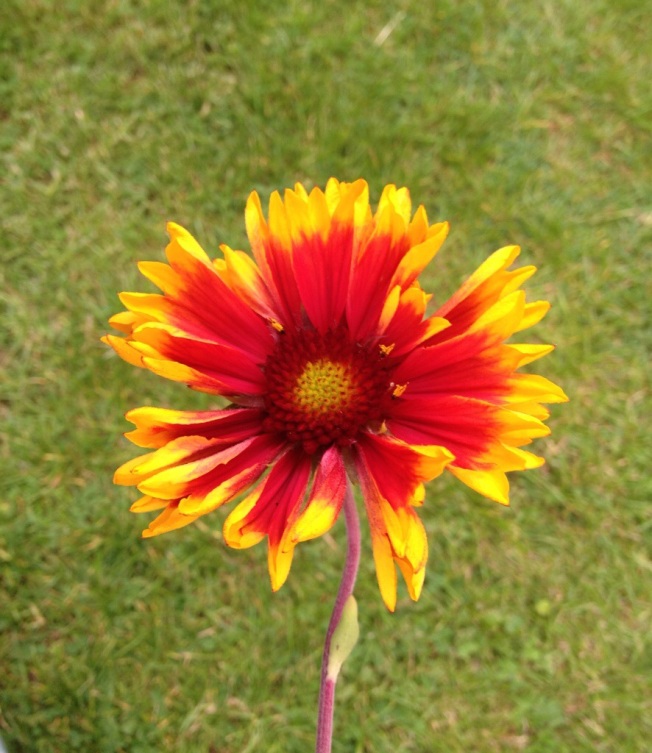 The native common spotted orchid is in bloom! 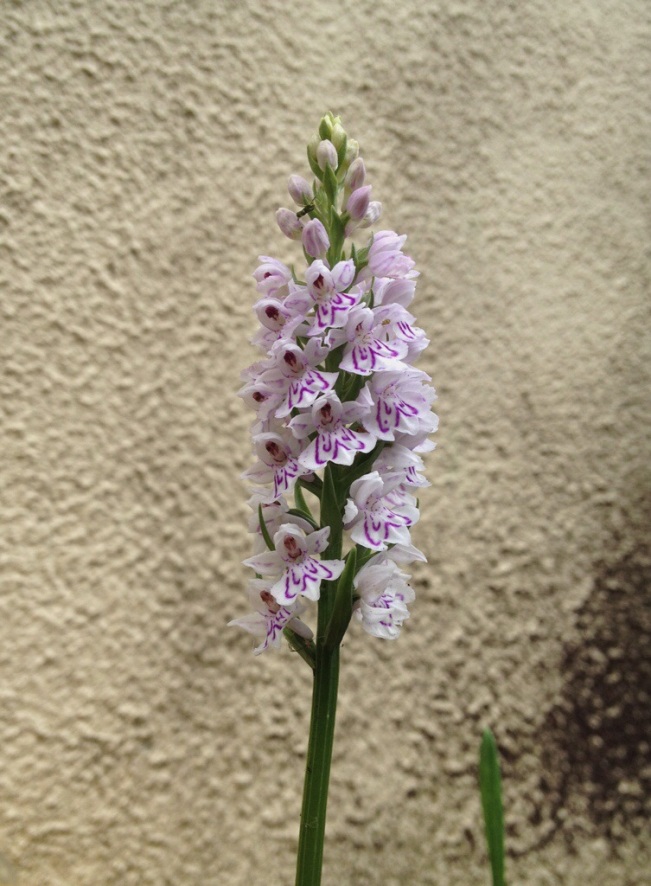 Lilies are in bloom! The orange ones came up first. 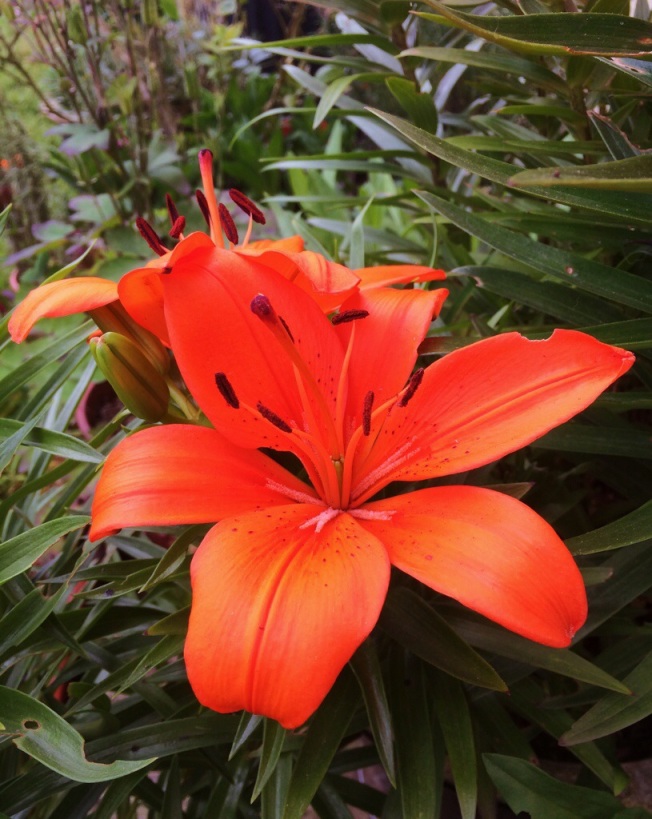 But today! Today, we walked out front to see the first bloom on my “black” lilies! I love these so much!

Best thing is that I accidentally learned an iPhone photography trick for flowers. I took a shot of this, and it was so very wrong in the colour. Too red, too orange. So I put the flash on, as a whim – and by golly by jazuz, the real colour came out and said hello! I will be using this again in the future – imagine how that clematis pic would have looked!

Thanks for wandering around my small Irish garden with me!

If you feed a cow a lettuce…

Spot loves to be cuddled under my right arm when we (rarely) settle in front of the TV. His place, every time, is to be squished under my body and covered by my couch-blanket, head and all.

Well. Couch-blankie (crocheted by Socks and much beloved) has good-sized holes in it. Holes that just happen to be the perfect size to poke kitty-ears through. 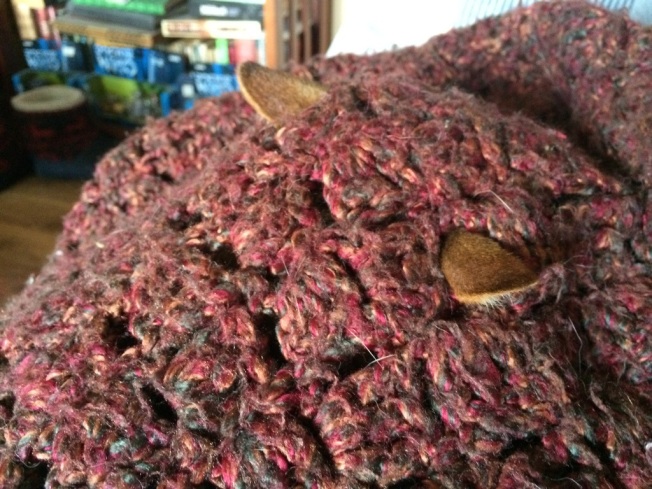 I can’t remember the last time I laughed so hard. Poor Spotty-Cakes.

I rarely dislike any critter. Be it vertebrate or invertebrate, warm- or cold-blooded, furred or scaled, no legs at all or a hundred legs.

However. Since I’ve lived in Ireland and discovered my love of plants, I now have an extreme dislike for a certain invertebrate.

Holes in my hostas, strawberries with caverns eaten into the lovely red pulp, seedlings arbitrarily chewed off at the base of the stem. Augh!!!

I have an Irish Wildlife book. It has exactly six pages of mammals for a total of 43, which includes whales (and the bastard American mink an ecological group released from a fur farm and now has overrun the country, due to well-meaning dammed idiots). Rather an astoundingly tiny number of mammals, but it is a small island after all.

The ‘Terrestrial molluscs’ section, on the other hand, has 21 types of slugs and snails. What the HELL, Ireland?!? I know it’s wet and green, but really?

I’m not squeamish when it comes to easily-squished things. I have been known to flail about like a Whirling Dervish when I’ve walked into a large spiderweb in the dark, but who wouldn’t? I have a dislike of ants when they surprise me, and maggots are just disgusting. I have stories to explain both the ants and the maggots. Not today. Today is when I admit to a shudder, a step back and maybe an involuntary sound of horror when a giant-ass-slug surprises me.

They do, they do. After nine years here I still can’t get used to seeing slugs the size of my thumb in my compost bin. Yeeuch! Even better, at the bottom of a pot I want to use. Which is where I found monsters.

I had an olive tree that didn’t survive (not surprised) but I kept it as I could grow snow peas up its dead trunk. Well, I’ve not done that in a few years, so I moved the dead tree, soil and all, into another pot it didn’t quite fit into. It was a nice pot and I wanted it for a more permanent planting. Anyhoo, the tree has been in the temporary pot for a year, and I decided to move it. Picked it up by the trunk, and damn if it didn’t just pull right out of the pot, dirt and all.

And there were huge slugs in the gap at the bottom.

I put the tree back in the pot and moved the whole thing from the bottom, leaving it alone until I could face the slimy suckers. 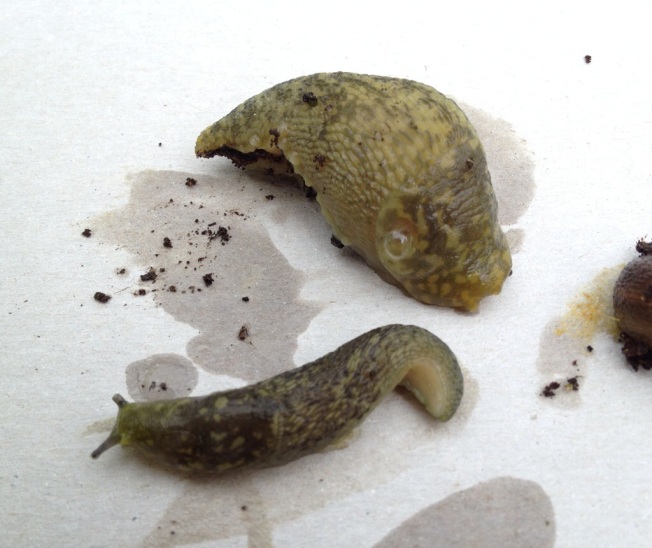 That’s them. One big sumbitch and one younger version, both Limax flavus, or yellow slug. They look more green to me. It must be because of all the lovely tender plants I feed them! Just look. Nasty nasty nasty.

Me being me, I got over myself and knocked them onto cardboard so I could take pictures. I also wanted to know just how big they are, so I got out the tape measure.

That’s the smaller one – the juvenile. It woke up first and tried to get away as fast as slug-ly possible. I didn’t let it, of course.

While trying to get the older one to wake up and stretch out, I found something even more disgusting. Slugs have mites. My camera wasn’t good enough to get them, but both yellow slugs had tiny cream-coloured mites running over them. Ewwwwwwwwwwwww. They must be pretty specific to slugs, these mites, because how the hell didn’t they get stuck in the slime? I know more about slugs than I ever wanted to know.

Swift had it right:
“The vermin only teaze and pinch
Their foes superior by an inch.
So, naturalists observe, a flea
Has smaller fleas that on him prey;
And these have smaller still to bite ’em,
And so proceed ad infinitum.”

I don’t feel that superior. These slugs are unstoppable!

I finally got the older one to unfurl, and it gave me a perfect measure.

An inch, Mr Swift? How about four? Gaaaah!

The book says that is maximum size for this species. But. There is another one that can get up to 25mm in length – almost ten inches long. The ashy-grey slug, Limax cinereoniger. At least this Limax doesn’t come into gardens, otherwise I might actually faint away if I am surprised by one of those.

Oh: I killed them all. With glee, and table salt.

Really? Orbs? Really? Because I take a lot of pictures, like everyone else on FB? I can’t think of any other reason they think I’d be fascinated by a group that believes photographic anomalies equals … well, whatever they think! Spirits, ghosts, souls, aliens…? I’d be more likely to believe these photos are capturing the remnants of a fart than anything paranormal.

Oh now, so many many more members! These must be the folks that have it all figured out, for sure! I’ll jump right on that.

I can only think my tirades against the anti-vaxers and my distaste for what the Church has been up to recently (800 dead kids found in an old septic tank, anyone?) links me somehow to those people who believe the rubbish they hear ‘from a friend of a friend’ over proper scientific studies.

This might not be terribly interesting, but it cropped up in my mind-web as a blog idea and I want to run with it.

I have plants that I never planted. Some are still a mystery, like this one: 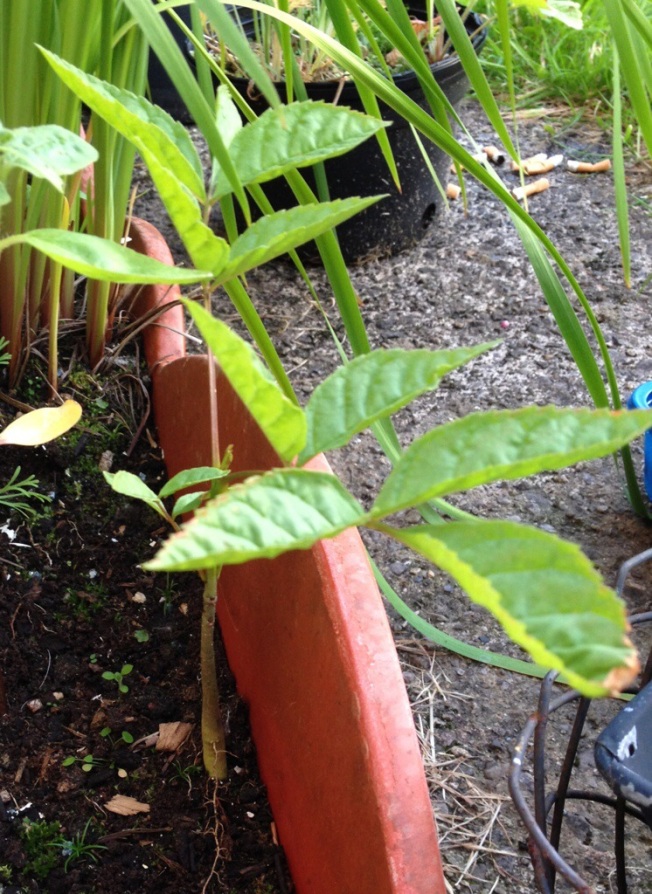 It’s a tree of some sort… Probably a big old weed tree like my grey willow; now well over 12 feet tall and beloved by the little birds. This one is growing in my planter of irises, and I’ve tried to kill it two years in a row by accident. It keeps coming back – maybe an ash tree?

I gained a fern last year out of nowhere, too. 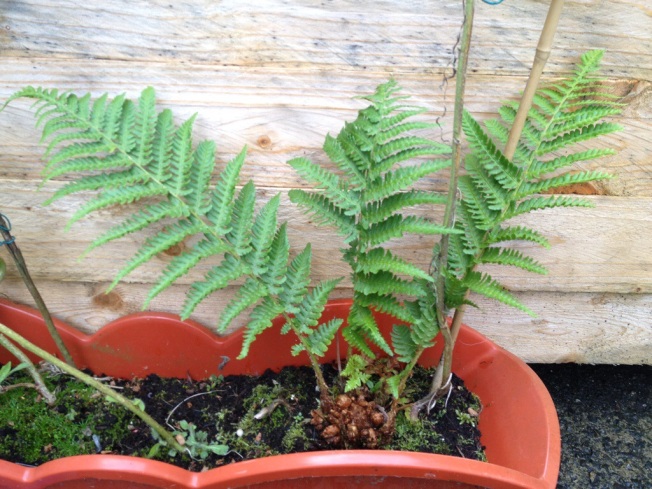 This is either a ‘hay-scented fern’ or a ‘lady fern’. Tending toward the former, as it says primarily grows in western Ireland and likes west-facing land (ticks one box, as it faces south). I don’t mind one bit that it landed here.

I dug this up and planted it, a native flowering grass. I believe it is thrift, Armeria maritima.

And of course the yellow iris we dug up! I don’t know anyone else who has these in their garden on purpose. Iris pseudacorus

My newest arrival was a mystery for the whole six minutes it was in Facebook. I had a guess, and it was confirmed: native Irish common spotted orchid, Dactylorhiza fuchsii. Did you know that Ireland has at least 14 native orchids?

It’s getting ready to bloom, too:

I love what I grew intentionally, but these are some lovely native species that I can’t kick out of the garden.