For some reason, I’ve had a lot of interest today on this much neglected blog. It had a good result: I thought of a reason to post!

I normally only give close up shots of flowers, so how about some pictures with a bigger view of the hot mess of plants I have?

A little patch out front, nice and shady for hostas. Lovely purple blooms going well with white gladiolus and some orange crocosmia.

More crocosmia (lucifer this time) with roses and a grey willow “weed tree”. I’ve clematis, Passion flower, and wisteria growing up this tree, and the little birds just love to perch in it. 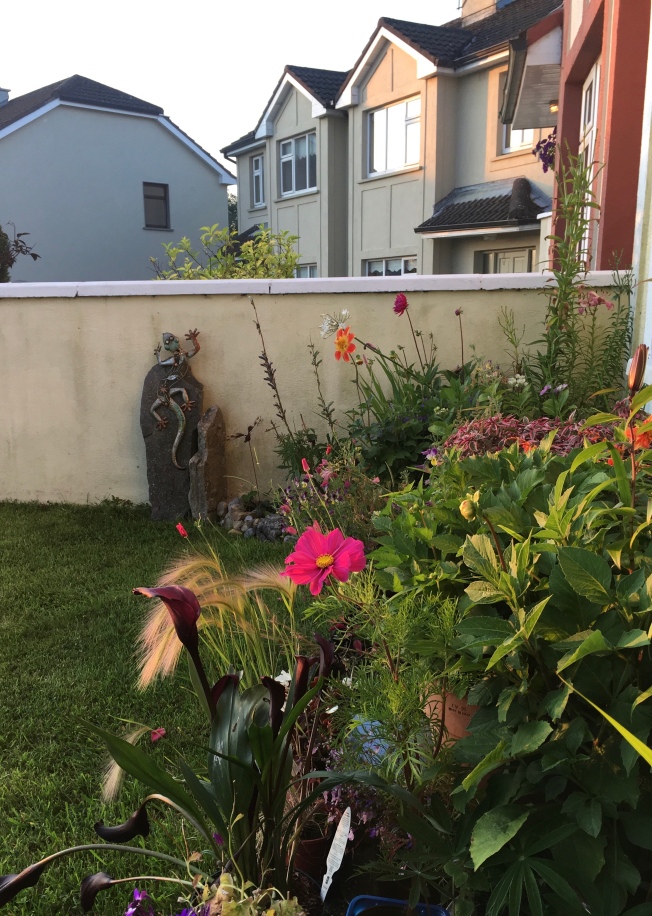 More out front hot mess. I took this because I’m in love with a grass for the first time.

My raspberries. I had four plants to start with. Enough said.

The Not-Sweet-Pea. It is perennial, and I fight every year to get it to grow up, not down. I think I finally won, and managed to make it stand up! 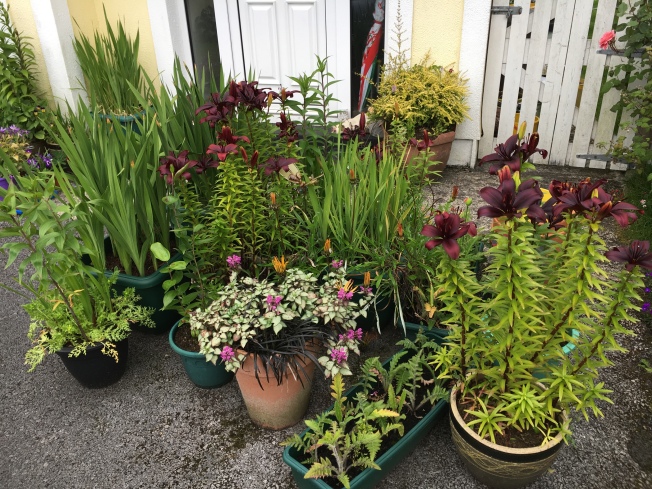 Pots? I got pots. Thankfully the car is small so I can take up half the driveway with potted plants. 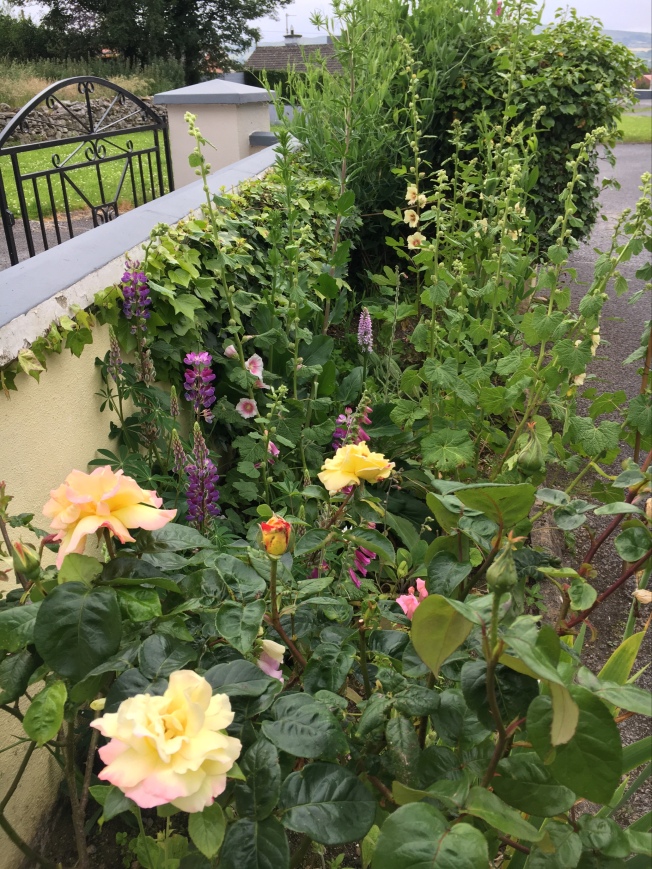 This used to be grass. An older picture as the Not-Sweet-Pea is big, but not in bloom yet.

Looking the other direction from the previous picture, in the same strip that used to be grass beside the driveway.

So there you go, some wider views of my plants. Imagine if I had a large garden!

I’ll leave you with a new favourite (in close up, of course). 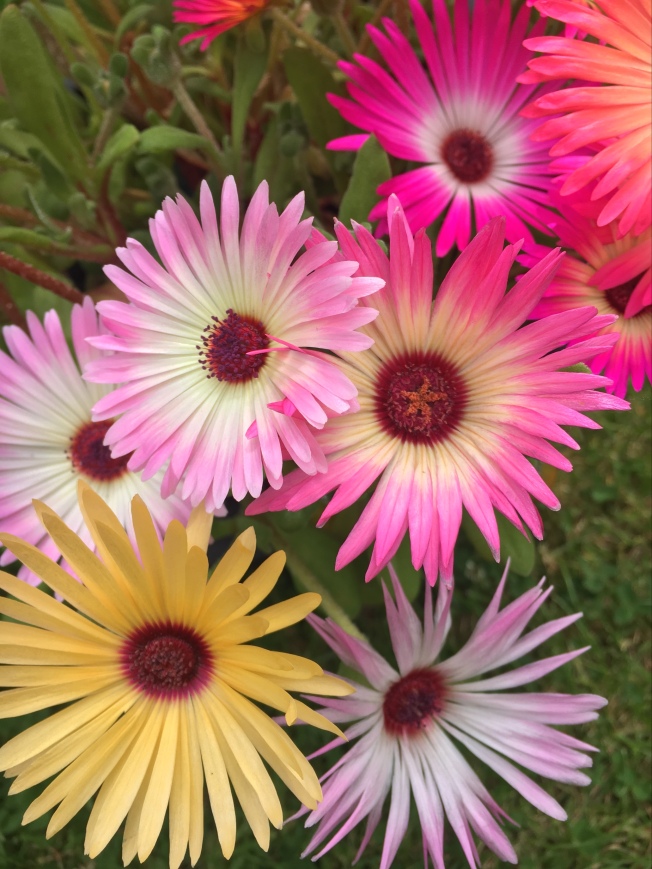 I know it is meant to get very cold this weekend, below freezing. It might not happen, just like the last big snowstorm went right over us on the Atlantic coast and dropped on the west coast instead. Pooooooor Dublin.

Me, surprised to be feeling positive in spring, decided to get some seeds going. First I had to sort through the massive, and I mean massive, quantity of seeds that I have. Hubby needs to stop buying me magazines with free seeds! 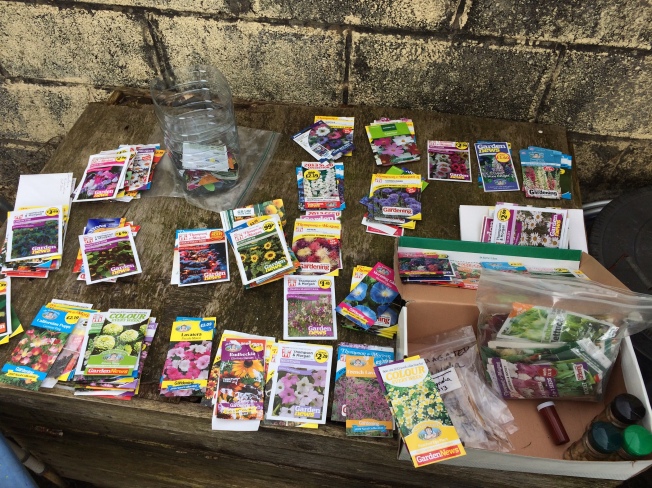 Nearly every pile has more than one variety – for example, seven kinds of poppies, eleven types of sunflowers. I had other piles of that I definitely wanted to plant, might want to plant, two groups for himself to choose from, and a discard pile. These are just the flowers; I didn’t get into the veg seeds yet (zipper bag still in the shoebox).

I’d already set up a mini greenhouse a few days earlier. Brand new, but had been boxed and unused for a couple of years. I had new seed trays, new soil – not for seedlings, unfortunately – and a sunny day to enjoy.

I’m not gonna list everything I planted now. It was a lot, and quite a few ‘best before 2014’ ones I planted for the hell of it. All carefully planted according to depth, needing a cover of light soil or none, and labelled with species and number of cells planted with each variety.

I’m not going to list them because it doesn’t matter.

I no longer have the faintest idea of what seeds are in which cell. The whole greenhouse went face-down yesterday in wind that wasn’t there…until it was.

Couldn’t even get to the front zippers. This happened when I left the house for 15 minutes. I rushed home from the shop because I accidentally locked us out of our bank card, found this, and started to cry.

Hubby tried to help me over the phone with the card, and told me to go sort out my plants until he called me back…I couldn’t, it was pouring rain! Then when I tried, one of the important plastic bits on the greenhouse shattered in my hands. I screamed bad words and threw greenhouse parts at the innocent grass.

Phone call from himself let’s me know that I have to drive to another town to sort out the bank card…bank closes at five, it’s ten to four now… deep breaths and make sure the car has enough petrol to get there as it is low, and we have no cash. As soon as the downpour stops, I go out to see if I can make it.

Rain stops. Out to the car and see that I left the windows and sunroof open as I was in a panic sweat that needed cooling when the bank card didn’t work. Back inside for towels to hopefully save the electronics. Drive to other town. Realise on the way that it is late on Tuesday and I needed to do something pretty important on Monday, but forgot. Struggled for parking, more panic sweats.

The bank closed at 4! Defeated, I went back home (on petrol fumes) to try to salvage my seeds. I had to take the greenhouse apart bit by bit and carefully try to poke dirt and seeds back where they came from. Not so bad for two trays on the lower levels. Very bad for the upper two – the ones I really wanted to grow!

My only hope for one tray is that as I used a seed packet, I turned it upside down on a pile. One label stick remained in place, so I can get it right one direction or the other, hopefully?

On the plus side: years ago I found some seeds on the ground at a local, beautiful, garden and they are growing. Not all is lost.

I do have some flowers!

Our snowdrops have been blooming since January. I’m very pleased with how just a few bulbs planted years ago keep spreading. We had -4C temps recently, and I was sad to see all the ‘drops were flat on the ground. Tough little plants, they perked back up in two days and a week later still look this good!

The daffodils and narcissus did the same flattening and same perking up, but they aren’t blooming yet. 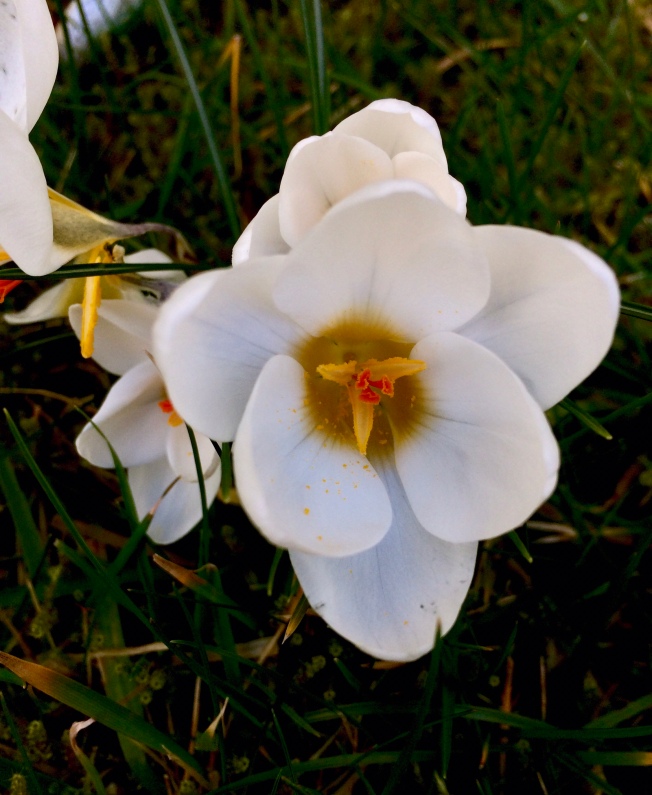 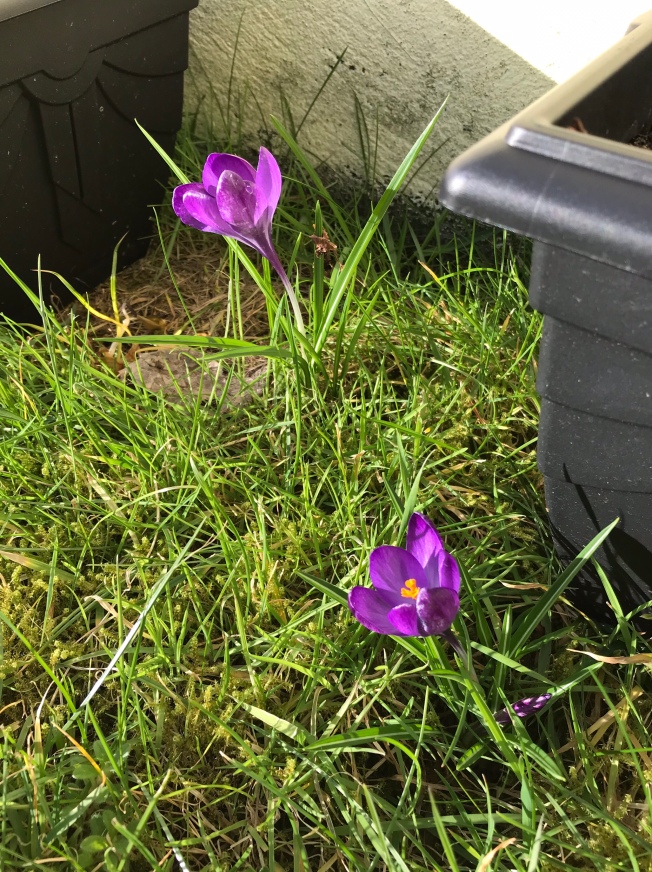 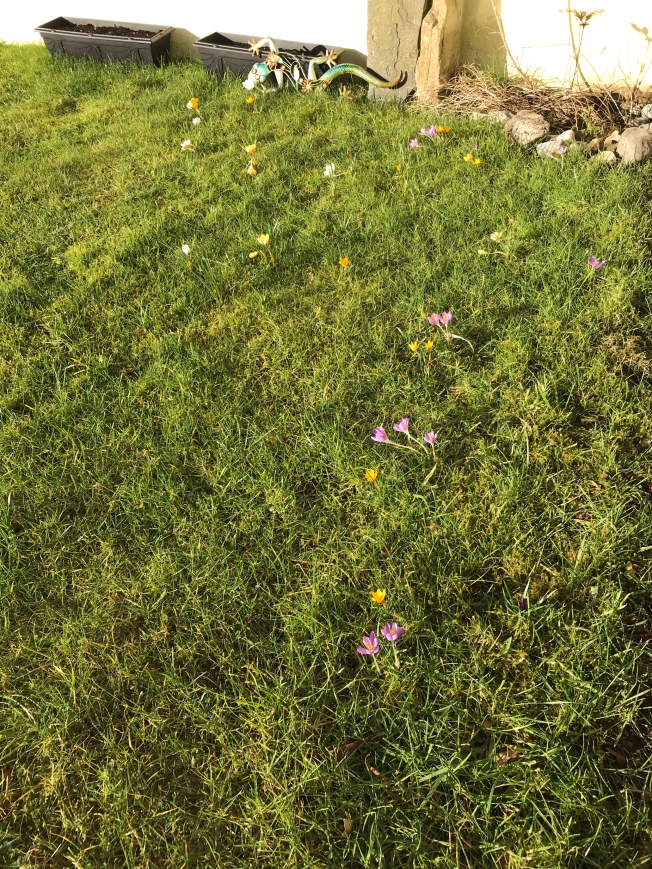 My crocus. Eventually I plan to have that whole awkward patch of grass filled with them. I’m a little worried about how much moss is in there, though! Any tips on removing or killing moss without killing bulbs? 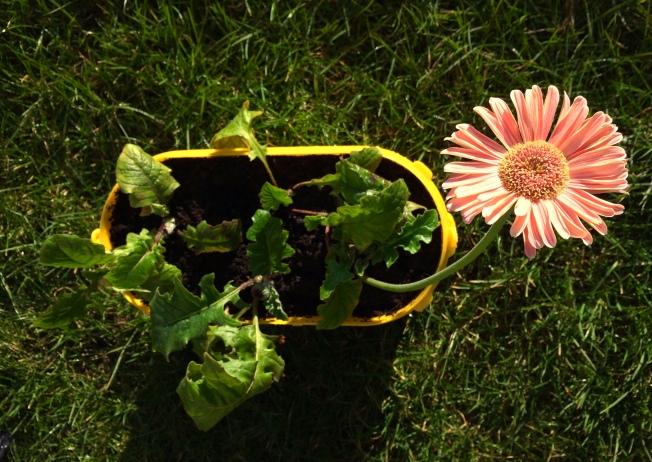 My gerbera daisies. I keep them indoors, but they were in four shallow pots and several years old. I repurposed a tall container, put holes in the bottom and some rocks for drainage, and used an identical container as a water dish. They now take up less windowsill room and have so much more space to grow. Four plants turned out to be nine, as well – they couldn’t be separated since they were so root bound. I know I did the right thing as I have so many blooms coming up! One seems to grow at least a centimetre a day.

Lilies are opening up. This is the view from where I sit in the morning with my coffee.

The gazanias are loving the sun, too! This is a two year old plant, and is truly enormous. Grown from seed, and is just stunning. 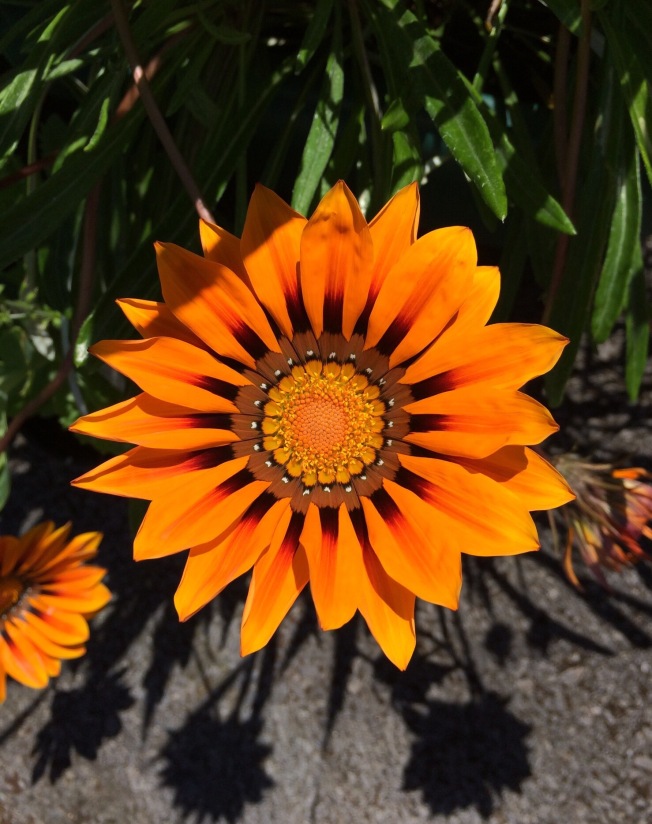 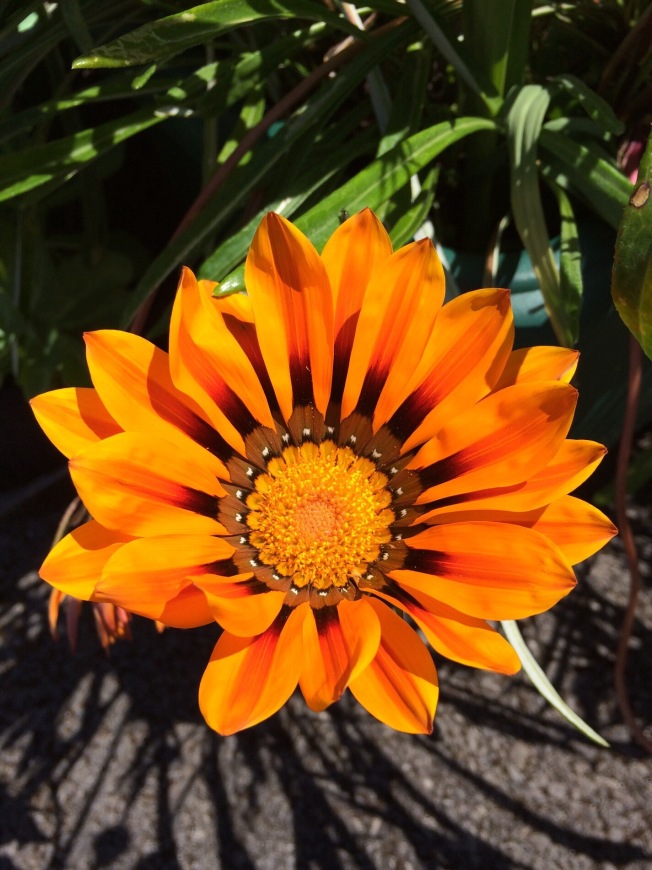 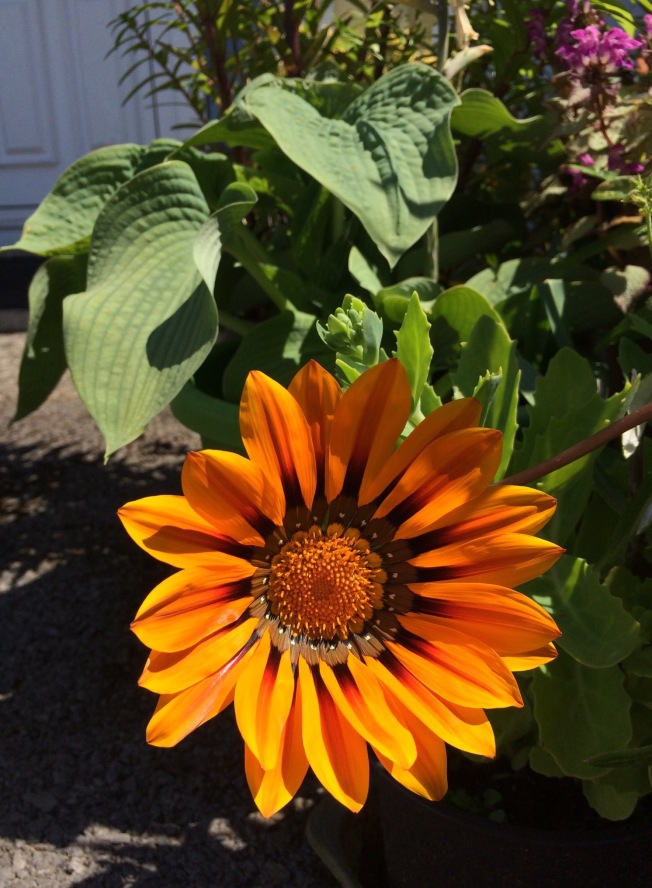 Hope you have had some sunshine, too!

I think it’s been officially feeling like summer this month, off and on. Likely about all the summer we will get! My flowers are loving it. 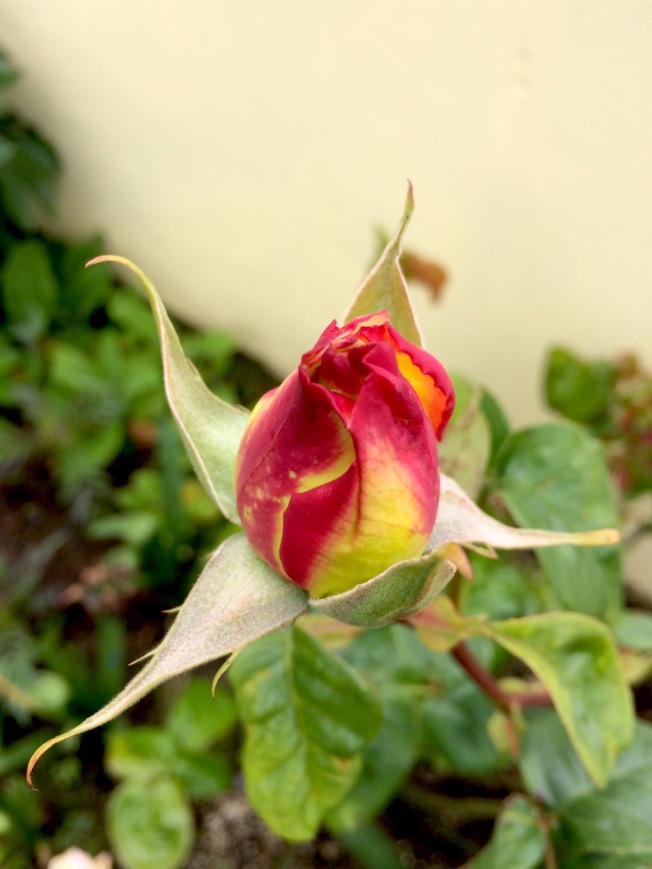 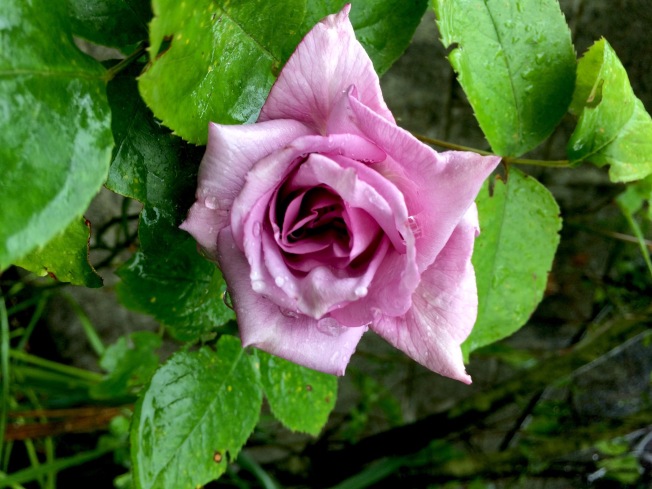 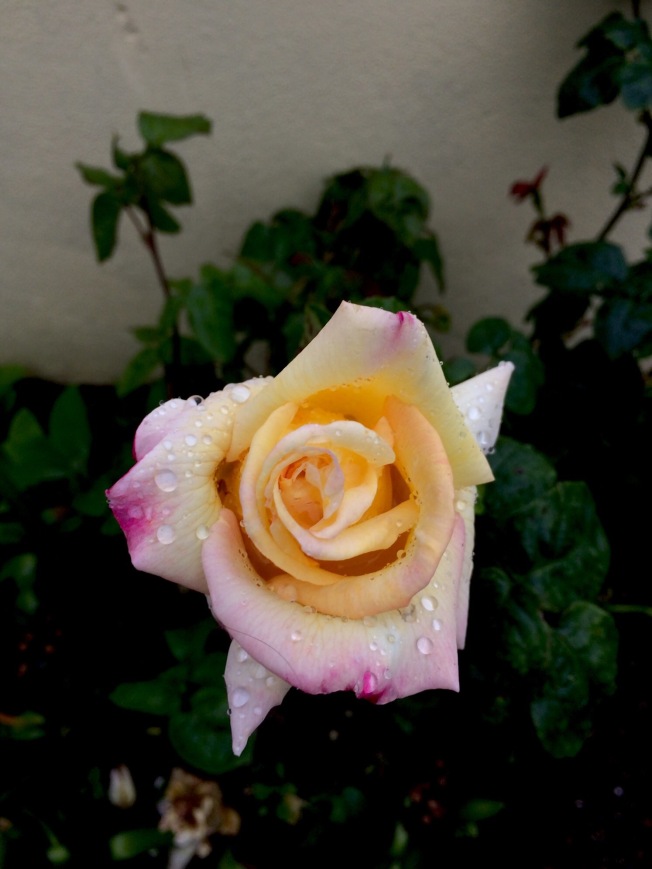 The first roses of the year. I love them all. 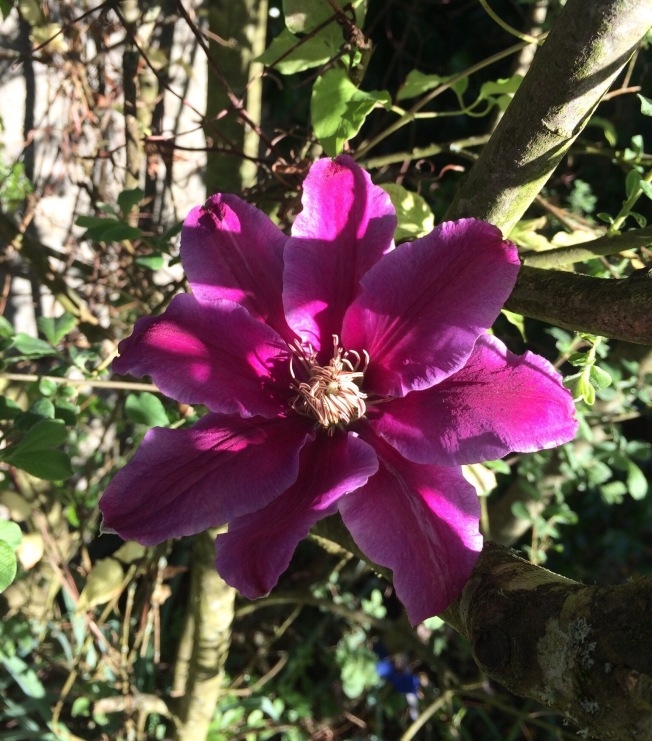 Clematis – top one is one of the new babies from last year. Just opened this morning! The others are growing up the weed-willow I have in the corner, and are the main reason why this grey willow still lives here. That and the birds love it. And I have a wisteria growing in there, too! 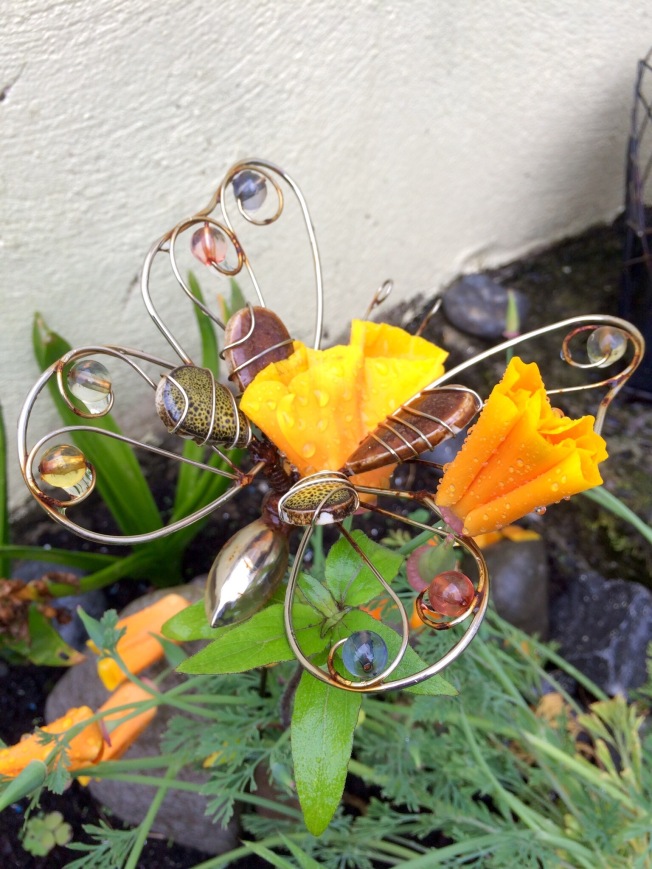 California poppies and a sunflower from seed. 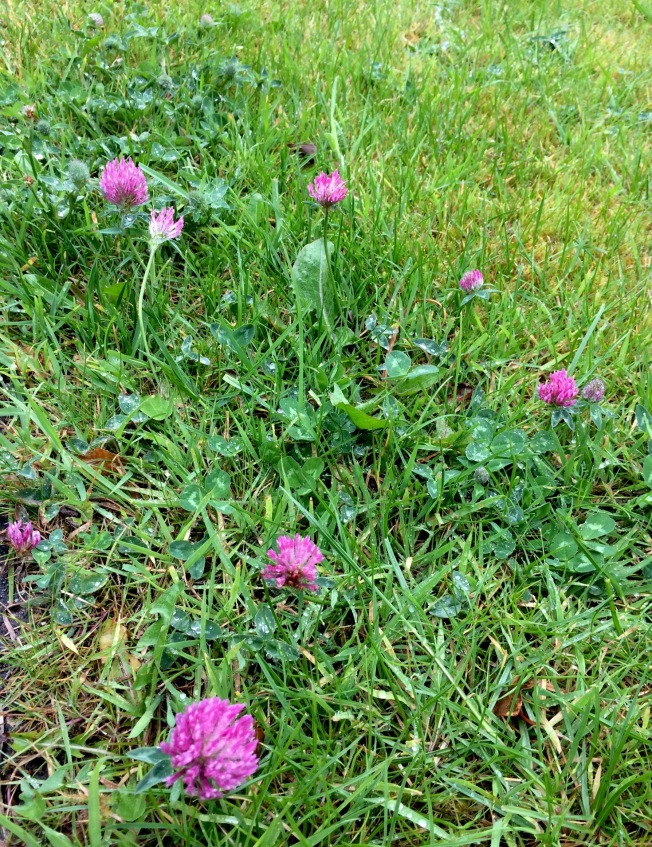 Something for the bees. 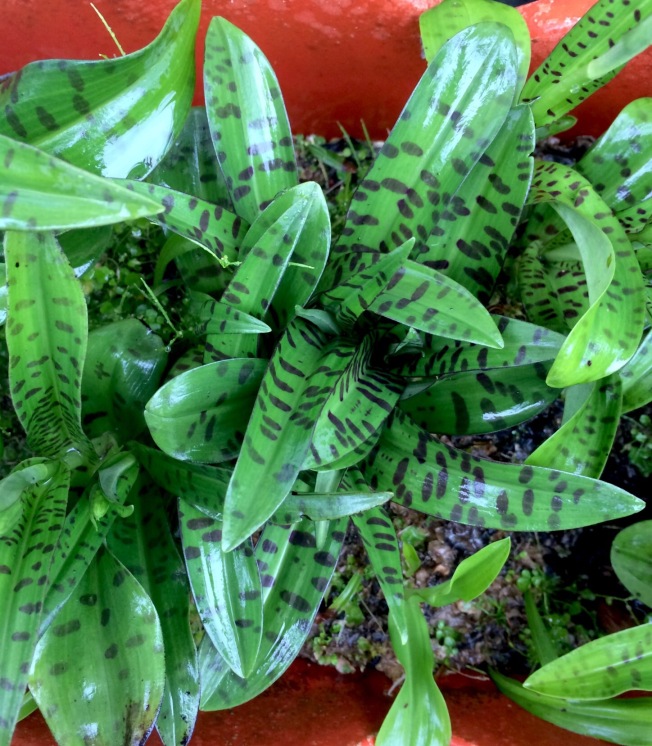 Native common orchids going crazy as usual. They have colonised my garden. I’m not complaining.

English lavender. The bees were loving this today. 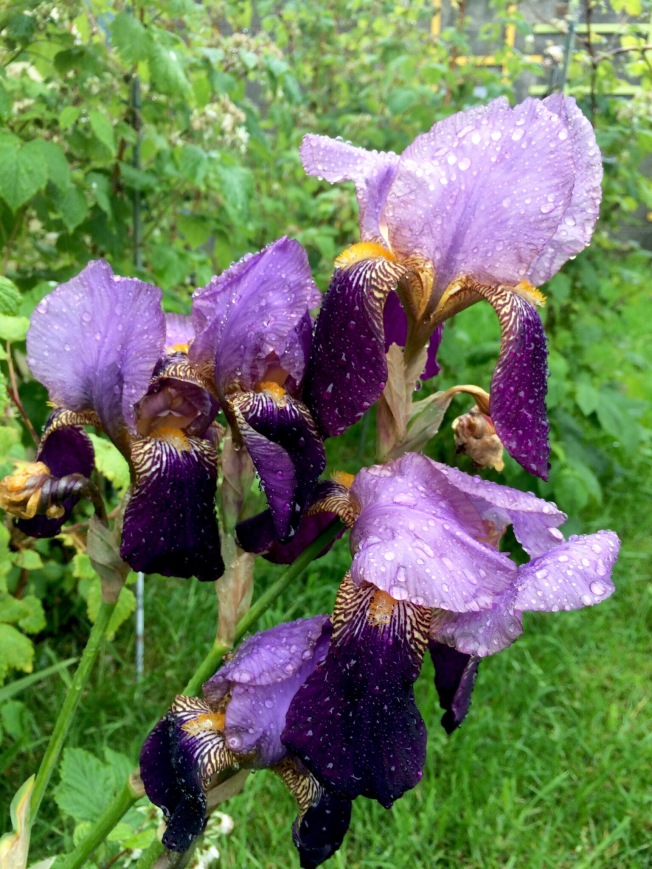 I’m so excited! My little girl is all grown up. ” 🎼 Girl, you’ll be a woman, soon…” horrid song but let it go as my lilac has bloomed! 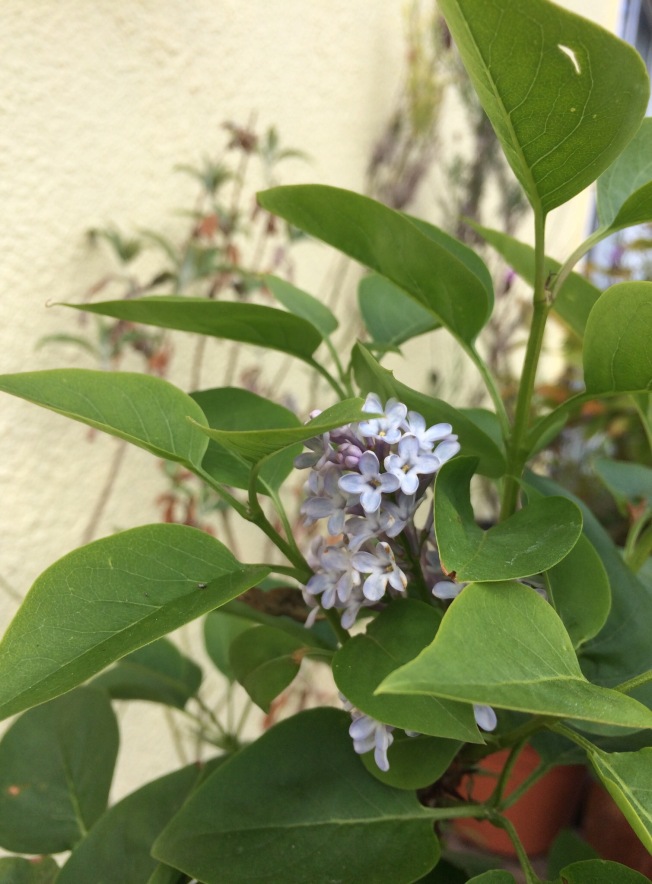 Grown from seed and still well under a yard (or a metre) tall, my little baby is now looking for love. *sniffle*

My sister sent me gardening stuff for Christmas! Along with a cool bug hotel, I got this:

Ah, she knows us too well! It’s a nice little kit with six types of seeds, biodegradable pots, plugs of soil, stakes for labelling, and a very nice, big pamphlet that not only tells you ideal planting advice but has drink recipes!

I planted everything but the strawberries on Sunday, as I have a different variety still going from last year and I don’t have much luck with them in any case.

I saved the last pot and plug for seeds that Kalamain from Kal’s Gardening sent me. Acer seeds! Hubby has wanted an acer for-ev-er. My first attempt at germination failed, but Kal sent extras so I’m trying again. He also sent me alliums and calendula ‘candyman yellow’ so I am trying those, too. Hubby loves yellow or orange flowers the best, so if I can grow him a maple tree and some yellow flowers, Kal will have made him a happy garden-observer!

All of them are in the heated propagator right now. I’m keeping a good eye on them, and the cinnamon basil is already sprouting. I also have bad luck with basil, so I’m 100% positive it is just the heat making it even think about living with me.

Himself bought me a bunch of hyacinth bulbs. I love to have them inside, as I adore their fragrance. Can’t do that, with kitten-features about the place. I was rushed to get them into the ground, so I stuck them wherever I could. I’m well pleased! 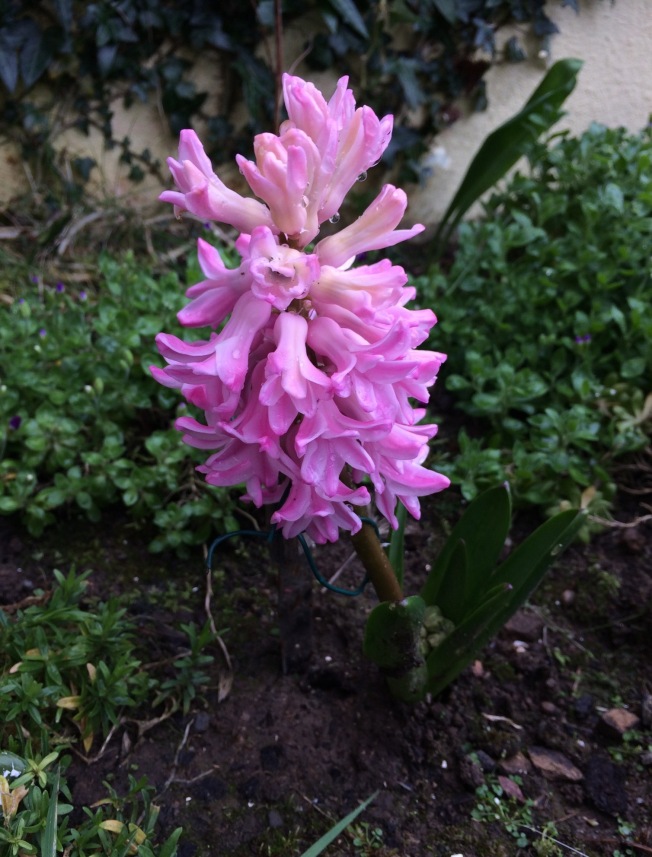 First one to show her face. I found her fallen over and staked her up, to no avail. Broken off at the stalk, this one is now fragancing my living room. If you look closely, there is another flower head coming up on the right, so all is not lost! 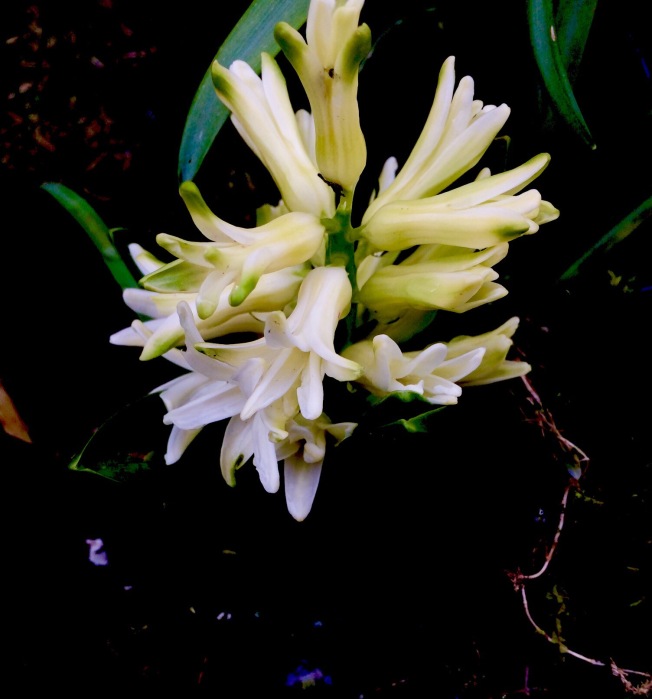 I’m feeling a bit sorry I didn’t put them in sunshiney places. This, and the next one, never see direct sun. 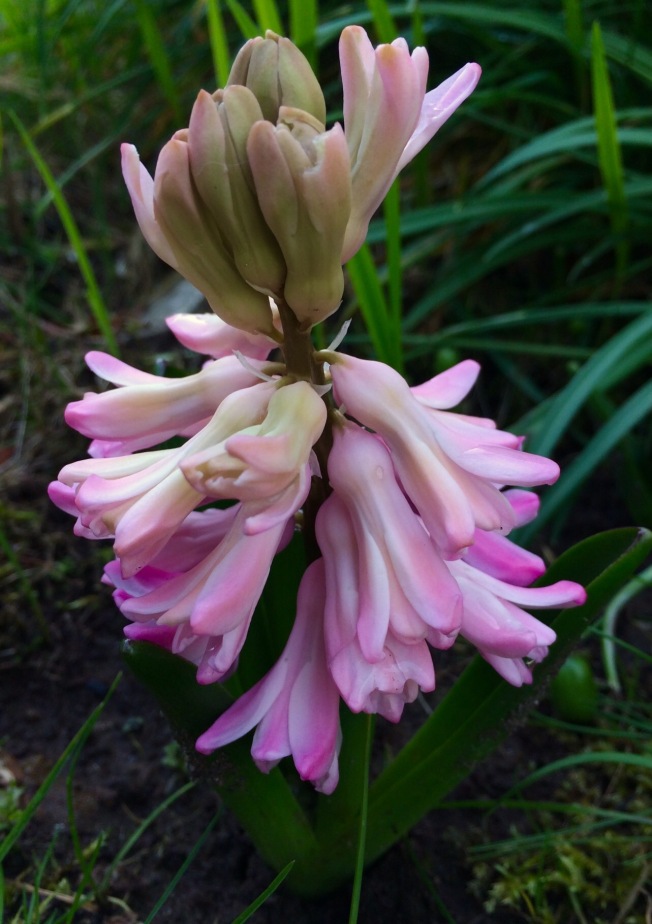 So lovely, aren’t they? And the scent is incredible. Hope I get some bees having a sip.

My new peony has survived! Not being sure how old she is, I don’t expect flowers this year. I could be surprised! It’s the first one I’ve ever grown.

Indoors, my gerbera daisy plants are soooo happy. As am I, to see these beauties every day. 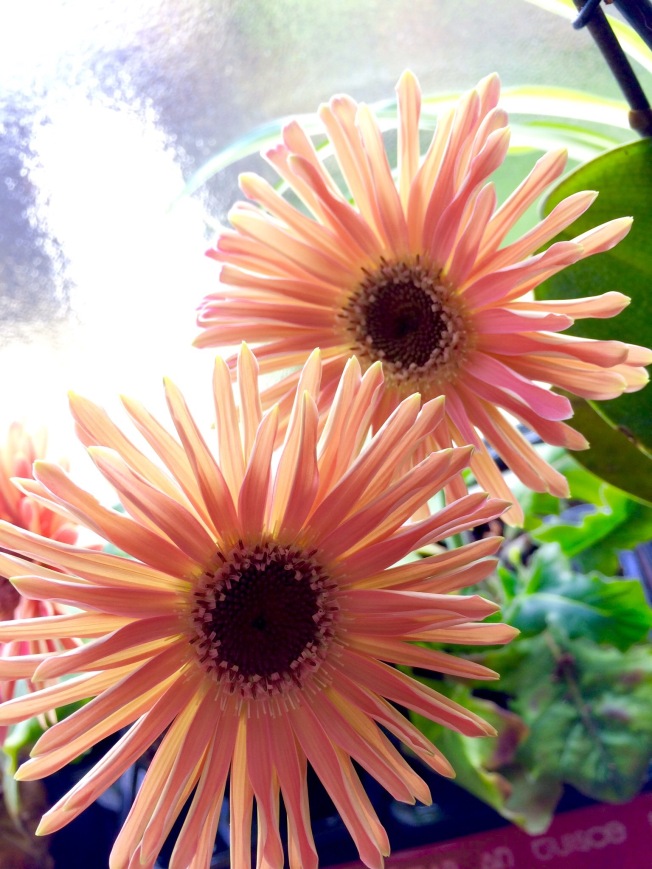 Scottie – these are the ones I reccomend to bring some light and colour of life into your home. They are rather expensive to buy, for a plant, but if you grow from seed like I did, they are never ending beauty.

Hubby buys me gardening magazines because they come with free seed packets. He gets me about one a week. These are my prizes going only back to December:

Some of these are for seeding outdoors where you want them to grow. So no cineraria, lettuce, wallflower, cornflower or the big sunflower in the top row.

What I did start today:

Hollyhock ‘Good Golly Miss Holly’ (no botanical name given, but says it is a brand new hollyhock named by Garden News readers)

And the one I’m going to try hardest to keep going – French lavender Lavandula stoechas.