Someone had great fun yesterday reading every last post I’ve done! I’m quite flattered about it. I’ve so few followers, and I’m so new, that my site stats tell me these things. I’m less than a month and a half along but I put up so very, very much it is rare that anyone tries to read it all, especially in one day! (I just had a look, 170 posts, yikes, I’m a bit verbose.) Whoever you are, thank you – I’d love it if you commented, but I’m glad you took the time nonetheless. I’ve not had such a high-count day since I did the portraits of Jimmie Chew.

Oh, yes: I’ve been rejected by BioWare Ireland as a customer service representative. Probably because I couldn’t kiss arse enough in their on-line interview. I just couldn’t blow that much smoke up an online questionnaire’s arse. I’m afraid to say I’m happy that I didn’t get it, it sounded like a living hell.

Hubby took a photo of the statue they are putting up in the square. I wasn’t too far off in my description yesterday. 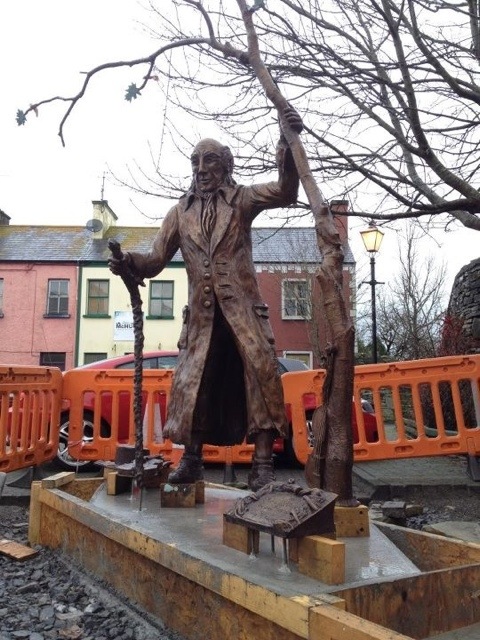 This is Anthony Raftery, “the blind poet” who was from this area. I suppose I should apologise for complaining about a cattle scale being taken out in order to commemorate much older local history.

My ‘big news’ is that I sent in my application to be an exhibitor at the Open Fair in Castlebar on December 4. I applied as a digital portrait artist, illustrator, and logo designer. I’m a bit scared, to be honest. I have no idea what to charge. I don’t know if I can or should sell my work as digital only, no hard copy: or only hard copy. I’d have to borrow a printer or have it printed elsewhere.

Well, the main thing is that I’ve taken the first step. Even if nothing comes of it, the act of doing something like this is a huge breakthrough for me. Scary, but also scary in a good way!

Well, just back from another interview, at the same company I visited last week, but for a different department. It was another marathon interview, 40 minutes this time. I’m still taking that as a good sign: especially as the time flew yet again.

It is a sales position. I’d be the in-office partner to a salesman on the road. I would have to ring customers directly and see if they need anything. Yikes. I won’t say I can’t do it, but I will say I’m not entirely comfortable with the idea. However, my contract would be for six months only, as a training period, and I wouldn’t be commission based or receiving bonuses in that time. Which I am fine with, more than fine with, I prefer it. I don’t know if I could take the pressure of not making all the money I could in a week – I’d make a ton once and then grow to depend on it quickly and be pretty upset if I failed. I’m used to having a set job to do, doing it the best I can, and expecting to be paid for my efforts. Trying like hell for nothing would crush my fragile ego, not to mention my bank balance! I can also get pretty pissy over unfairness, so there’s a bad attitude ready to happen. So yes, a flat salary is great for me.

I’m under the impression that I am still under consideration for the first job I interviewed for. They are waiting on contracts from elsewhere before they can hire for that job, and don’t have a date yet. It is very possible that I’d do the sales for six months and move to the other department after. They prefer to hire from within, and prefer that employees know how other departments operate. Knowing sales would be very beneficial for the second (first?) job.

Well, I won’t know until next week, but I’m pretty positive. I like the way the company operates, I would be selling needed things, not useless crap, and I really, really liked both men I interviewed with. They never made me uncomfortable or asked stupid questions, and they were both intelligent and informative. Fingers and toes crossed!

Wow, total panic there for a bit! My WordPress app crashed on opening my blog. Restart the iPad, no. Check for updates, yes there was one, update, crash. Update a lot of other shite since I’d already entered my iTunes password, restart, WordPress crash. Check forums, nothing. Panic. Will I lose all my crap if I delete the app and reinstall? Bite the bullet and delete and reinstall, restart.

Working! All my crap is still smelling as rosy as it ever did. Whew. An iPad shouldn’t need restarting so much, but I live with an IT manager so I’ve learned good habits. Hell, I need a nap every now and again, too. I drive this thing hard, poor Shiny Happy (from the engraving iDJ had put on the back).

Interesting, though, to find myself actually worried and jonesing for my writing fix. Am I showing my age and slightly dodgy history with the term ‘jonesing?’ I can explain it. Really. Anyhoo, I’m pleased to learn that when I want to write, nothing else will do. I considered giving up and doing a Brushes painting instead, but I’ve not had a good subject since Usyaka, so I’m less than inspired. Despite doing a post earlier today, I really felt a need to blurt out my random thoughts and the schtuff that happened today.

So! Job interview! It went really well, I think. I liked yer man, and I think he took me seriously. When I said things that might come off ‘wrong,’ he understood and agreed with me. He wasn’t up his own hole, he was a real person and even cursed a few times. He mentioned doing so later, so an ‘oh yes, I’ve a potty-mouth, too’ bonding occasion was born. I think I’m in – but I felt that about the last job and was way wrong. That interview was about 10 minutes long and felt like 20, this one was 45 and felt like 10. I do take the length of the interview as a good sign, too.

Unfortunately, I won’t know for a while if I’m hired. Fortunately, he explained why it will take time, and it is a valid reason.

I also did another interview, of a sort, today. Go, me! This one is for a call centre customer support job at a company that makes computer and platform games. A possible nightmare for me, as I’m not good at bending over and taking one for the team. At least the customers are all nerds and I totally speak nerd. I decided to apply because I’m a Yank, and we Yanks know the customer service rules, don’t we? I might hate myself at the end of every shift, but I’d give good CS nonetheless.

The fun part about the application process is that it has been entirely on-line so far. I registered, uploaded my CV (résumé), and my ‘first interview’ was also online, in the form of a questionnaire.

Not so much fun. I could tell they are US-based when The Dreaded Question popped up: Where Do You See Yourself In Five Years?

I’d even joked in my ‘real’ interview about that very question, and the one where they ask If You Were A Vegetable, What Would You Be? So, I might have been a little sarcastic in my response. But not nearly as sarcastic as I’d have liked to be. I did say “I’m not as young as I was yesterday” which is a thickly-veiled hint that I’m too fucking old to answer stupid questions. Or perhaps they are too up their own arses to see that?

Maybe I was just trying to say that I’d kiss the customer’s arse, but not theirs. I donno. The pay starts higher than the ‘real’ interview, but it is much further away (if you think gas in the US is expensive, I’ll tell you what we pay) and would be nights and weekends, oh joy. I’m also too old for that shit, and have been for a while. I’ll suck it up, though, to not lose my house.

Sheeeeit, I feel like I’m on a downer note now! I’m not, really. I’m over the moon to have had not one but two chances at employment today, after so long without a response or even anything I could apply for. Yay!

Right, I should wrap this up as dinner is almost ready. I still feel like I’m leaving on a low note, so here is my dawg being adorable:

That’s my foot she’s holding on to, and still is:

What I like best about this is that she lay down, then reached out and grabbed me. It reminds me of my Bengal, Spot, who has to, has to, touch my face if he can reach it. I have successfully created a dog-cat. Or a cat-dog… Love my furry kids.

My hands are all smelly and prune-y from cooking two massive pumpkins this afternoon. I have a lot of pumpkin now. I also have very little freezer space. Dammit. Because they weren’t pie pumpkins, they are really watery. I’m letting the massive clump of mush drain, but I have no idea where to put it all. If I have time tomorrow, I’ll blitz it in the food processor in the hopes of reducing the sheer volume of gourd guts.

I might not have time because, drum roll please, I have a job interview tomorrow! Woot! It sounds like a good one, too – in other words, not retail. Although I’m not turning down retail at this point, uh-uh. However, I’ll take the higher pay that (hopefully) comes with an office job.

I used to have a doctor appointment tomorrow, finally, for my back. When the potential employer rang I said ‘yes I am free’ without even thinking about the damn orthopaedist. So I had to ring the hospital today and reschedule (they were closed yesterday for the holiday). I’ve been waiting for this appointment since June 2010, yes. But I’ve been unemployed since February 2010, so the bad back has to wait until the 16th now. They were very nice on the phone at least – I was totally honest and maybe that’s why it is only another 2 weeks instead of months. I know damn well not to call up and reschedule a job interview because I made a stupid mistake.

Oh dear. iDJ strikes again. He made a fire for me, and it isn’t staying lit.
Me: “Your fire went out again. The damn thing is useless.”
iDJ: “It loves you!”
Me: “Go away. Go away now.”

Earlier, I had to point out to him that he was talking to the fancy cheese he was nibbling on. I wonder about that man.

I bet I did something today that none of the rest of you did! I am totally willing to put money on it. Because I have none. I’d bet something really valuable, but on the tiny chance I lost, I doubt my cats would like you as much as they like me. I can stake a husband that talks to cheese? No takers? Okay then, you’d lose anyhow.

I watched someone try to start a helicopter while I was stark-ass naked.

Told you I’d win that one! I will, however, offer a consolation prize to the best guess of how I managed to view a failed aviation attempt whilst in the buff.