Before I got the kittens rehomed, I managed to get BigGuy neutered. He fell for roasted chicken, and I shoved his butt into the carrier and off we went to my vet, who had agreed to take him and do the neuter on behalf of the local SPCA.

We did it as a TNR (trap neuter release). The vets said he appeared to be about ten, but his teeth were pretty good for his age. He came out of the surgery just fine, so I took him back to work and let him go again. Part of my reasoning was that if I got Peggy done while the kittens were still around, he would protect them. I saw over the next few weeks that he stopped spraying pee everywhere (fantastic) while I also tried online to find a home for him. No one wanted a 10+ year old feral (former) tomcat, no matter how beautiful and kind.

He definitely became calmer and happier. And he showed me his incredibly fuzzy, curly belly! He was actually playing with string! I stopped looking for someone else to take him and started making plans to bring him home.

Hubby and I discussed at length how it might work. We bought a little cat-house for the outside, as we assumed he wouldn’t want to be indoors. We also had huge concerns about the dog. She likes cats, but definitely knows the difference between ‘her cats’ and ‘stranger cats.’ So, a ‘stranger cat’ in our back garden all the time was something we had to work around.

We both hated the idea of leaving him outside. But after the calamity and violence that happened between Lokii and Lumi when I tried to keep one of last year’s kittens, we knew we couldn’t just toss BG inside and hope for the best. Old man Lokii was not likely to want BigGuy anywhere near him. Also… the dog! What would BigGuy think of a massive dog in the house all the time? Was he scared of dogs? He should be, to have survived so long as a feral.

I put the little cat house together (smaller than expected), found a good sheltered spot for it, and when the stars aligned I went to work on a Saturday morning, got him into the carrier again, and brought him home!

I used tuna in oil to catch him this time. A tip for anyone doing cat-catching: DO NOT use tuna in oil! It got all over him. Especially his tail, which was horribly filthy already. At this point he didn’t want to go in the carrier again and did fight me a bit, then flailed about in the carrier. He came out with a dirty, oily, smelly, crud-encrusted stick instead of a tail.

Unfortunately, I was an idiot. Bound to happen; I’ve never done this before. I didn’t give him enough time to acclimate. I was accustomed to him following me around at work, and I expected the same from him at his new home. He spent the night in our tiny, junk-filled shed, and on Sunday morning I let him out with me and he went exploring.

Exploring right out of sight. He went over a wall and he was gone.

I have one week until my Open Fair ‘exhibition.’ I still don’t have a business name, email, or even a PayPal account. No panic… har…

I’ve mentioned a few times that it was one particular reader who gave me the idea and the hope and the heart to attempt to sell my work. It was a lovely blogging lady in the UK named Annette, and she had asked my pricing on drawing her cats. Until then, it had never even occurred to me.

As a thank you, I drew her furry kids for free. I wasn’t charging when she asked, and I didn’t think it was fair to ask her to pay for what others were getting for free even though she offered. And I did owe her a huge thank you, and there’s really only one way I could show it, isn’t there?

This is Nobby, isn’t he a gorgeous boy? 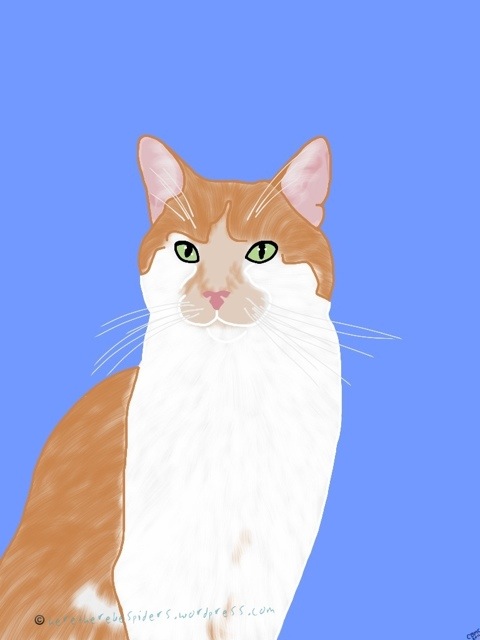 This is his biography, from Annette: “This is Nobby. My cat soulmate. Clever, inquisitive, talkative, active, adventurous, athletic, brave, funny, loving, and Felix’s friend and protector. An alpha cat in touch with his feminine side!”
She told me afterward that beautiful Nobby is no longer with her. I cried.

She told me this about him: “Loveable, playful, teddybear cat. Often bewildered by life, and not the sharpest tool in the box, but always ready with a purr…”

I’m happy to have met two more lovely fur-people and one very special human, and to have such an opportunity given to me. Thank you, thank you, Annette!

Poor Lokii. I know he’s not that smart, but I can’t imagine roasting his little brain inside his skull is doing him any good.

Yes, he’s asleep with his head stuck in the hot radiator. Sheesh.

Lokii-monster was being cute last night, and I tried to get a few pictures.

Napping with his brother.

Yawn…I’ve woken him up. Normally, not a big deal. Sleeping is awfully important, especially on a lovely warm hand-crocheted blanket by Auntie Socks.

Nope, I’m apparently more interesting. He’s Siamese, he talks. This is one of many, many times he was saying, “Hi! Hi! Hi!” Ugh, my table’s a mess. iPhone, booze, iPhone, tissue box, peanuts, pumpkin seeds, National Geographics…is that my used dental floss? Eww, I’m a slob.

He wasn’t amused by my lack of interaction, or the big iPad blocking his view of my face. So, he stood up on me for a stretch and to make sure I was paying attention.

He’s a big boy, and can sink his claws into my collarbone from this position. Time to put the technology down and hug a kitty.

It seems tonight is a cat night.

I have photographic evidence of my boys, in flagrante delicto. Bad Cats, no one wants to see that!

Poor Lokii, he just wants a nap. But noooOOOooo. 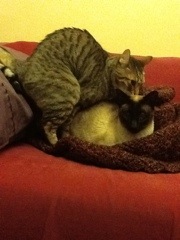 Can gay cats use the ‘not tonight, I have a headache’ excuse? I feel bad for him, this isn’t his idea. But from the look on his little face, he doesn’t have a clue what is going on. Poor gormless kitty.

Hey! Yes, YOU! You are sooo busted.

The boys, sharing their gay-cat-love with the world, as they do. Get a room, guys. 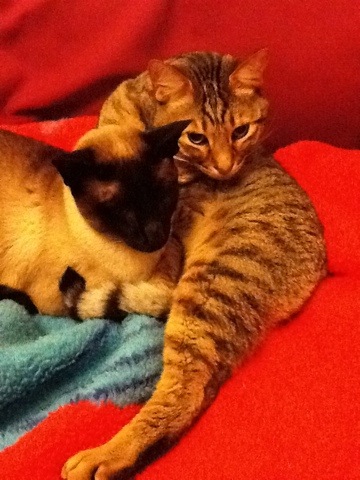