I know I personally don’t like to sign up to anything online that wants my email address. But The Petition Site has proven to me that they don’t sell my address over the years I’ve used it. You also can opt out of posting your name publicly.

So please – if you are reluctant to sign an online petition for those reasons, change your mind for this? “Stop killing stray dogs/cats and initiate a humane Stray Animal Management in Bar, Montenegro”

One of the first blogs I ever followed and had follow me in return was all about a simply stunning Oriental Shorthair named Osyaka. In the years that we have been blog buddies, I have come to call her a friend.

However, what she does when not taking stunning photos of her beautiful cat is heart-wrenchingly hard. Hard to read about, hard to see, and hard on her mentally, financially and physically.

My friend has a mission to help the cats of Montenegro, where she lives. It is a beautiful place, a member of the UN and an applicant to the European Union, with a harsh history of war and has only been independent since 2006. Montenegro is putting a lot of effort into to be a tourist destination and has had good success.

However, they aren’t taking care of their animals. Stray dogs and cats roam the streets. The dogs are roaming in packs and killing the stray cats. There are no shelters. Worst of all, the animals that don’t die by other means are being poisoned secretly without any interference by – and possibly the support of – the authorities.

Visit my friend’s blog here: The Cats of Montenegro Not updated recently, there are still enough photos and stories there to break your heart. Her Facebook page and Twitter have a lot of updates. 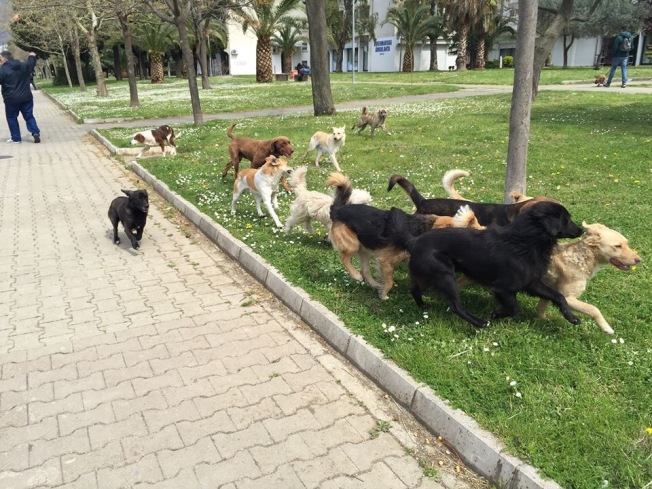 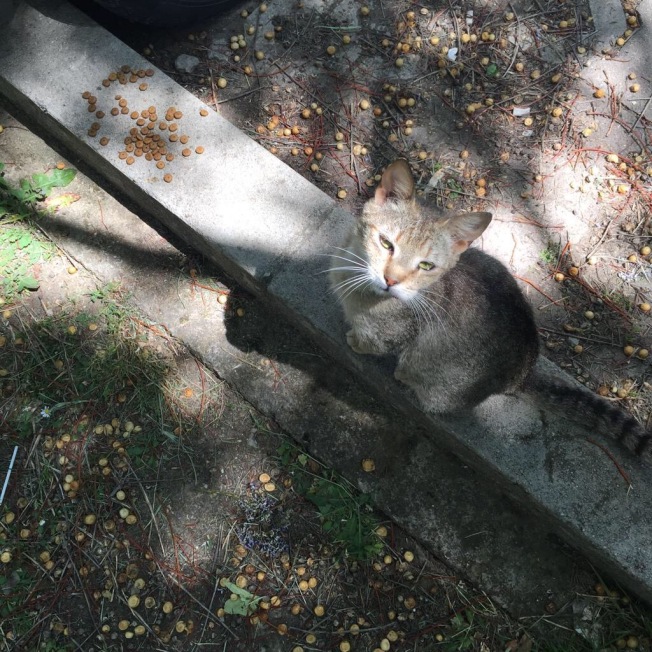 Moosia, who has a tumour and is getting surgery but will be back on the streets if no one adopts her. 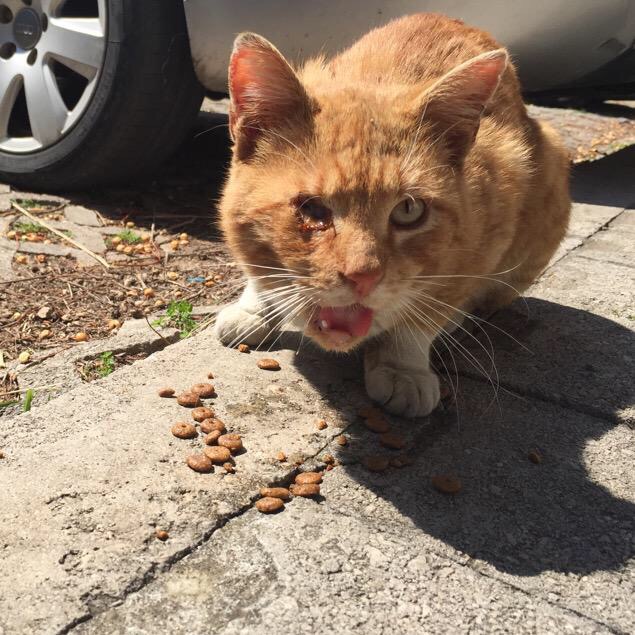 He used to have two eyes, before he got sick.

Really? Orbs? Really? Because I take a lot of pictures, like everyone else on FB? I can’t think of any other reason they think I’d be fascinated by a group that believes photographic anomalies equals … well, whatever they think! Spirits, ghosts, souls, aliens…? I’d be more likely to believe these photos are capturing the remnants of a fart than anything paranormal.

Oh now, so many many more members! These must be the folks that have it all figured out, for sure! I’ll jump right on that.

I can only think my tirades against the anti-vaxers and my distaste for what the Church has been up to recently (800 dead kids found in an old septic tank, anyone?) links me somehow to those people who believe the rubbish they hear ‘from a friend of a friend’ over proper scientific studies.

One of the main themes I had when I first started this blog back in October 2012 was to follow my best friend’s journey into becoming a parent. I posted almost-weekly for nearly the entire pregnancy, as it was as much a learning experience for her as it was for me. It was great fun to have our weekly phone call (still being done) and get the update on where baby Button (now quite the little character) was in her gestational progress.

I introduce Socks here, and further explain our fantastic friendship here. If you would like to read the whole saga – it is pretty funny at times! – the link to every Socks post is here. Might be a few random posts about “actual” socks in there too, sorry!

Okay background is covered! New news! Socks and Bear have been making another new family member for the last 42 weeks. 42? Did I say 42 when a human gestational period is 40 weeks? Yes, yes I did. She went over time, and over over time… and FINALLY the docs said, ‘durr, yes, we have room at the inn.’

Believe me, Socks was not happy, not happy at all to have things delayed so long! She was scheduled to go in, being pretty much ready to go for over a week (just not having contractions yet) and it seems that everyone else decided to jump the queue ahead of her! She was due the 13th March. I had been joking since she told me she was pregnant that her child would be a Paddy’s Day baby, but thinking the whole time she’d be sooner. When she started to show signs of being ready, I was hoping for 6th March, as it coincides with the birthday of a loved one of mine (pretty apt as Socks’ daughter has exactly the same birthday as my only niece).

But no. The 6th passed, the 13th went by, the 17th was green (for me) but not a green light for them. Since then, it’s just been a drawn out waiting game.

The boy didn’t want to come out! Oh, didn’t I say? It’s a boy this time! He already seems to love his momma, as 42 weeks is a loooong time to hang around.

Congratulations to Socks and Bear and Button on the new member of their warm family. He’s a lucky guy to be a part of it!

Warning: for my regular readers, this gets graphic in description but there are no visuals to avoid.

Right, I rarely do this… But I just heard and saw the stills and footage of a man in Miami who ate the face off another man. Rudy Eugene was shot to death by police, four shots. I wouldn’t be talking about it at all if I hadn’t read a load of comments about this incident on a website. The reactions just astounded me.

From America: I like that cops kill people that are eating other people’s faces off. “Get over it” (the bit in quotes from several commenters).

From everywhere else: How terrible that the cop had to use lethal force and shoot the man four times to stop him. Surely something else could have been done, we don’t allow our police to have guns and you Americans are too trigger-happy. Tasers, pepper spray, baton bludgeoning, and shooting the assailant in the legs were all mentioned as possible methods.

Okay, you’re both wrong. “Get over it” is not a valid argument. Neither is stating that you are happy that you live in a place where the law can kill people just because they are allowed to. I’m the daughter of a retired cop, and almost became one myself. Cops are people, and they make mistakes just like people do: all the time, every day. Being glad that you live in a place where those mistakes can be legally lethal isn’t something to be ‘proud’ of. If you can’t come up with a logical reason for why you think this shooting was justified, please don’t talk. You are the reason other people don’t like Americans.

The system needs work; I believe that human error is a terrible thing when lives are in the balance. I am not anywhere near qualified or educated enough to offer up a solution.

Now, the non lethal suggestions. The victim and assailant were on the ground, prone, and by appearances they were both naked or barely clothed on a hot summer Southern Florida day. Tasering would have further injured the bleeding man, because their bodes were in contact via various bodily fluids and actual fucking TEETH. I’m pretty sure the attacker had to have at least one hand on his victim, because it’s hard to rip someone’s face off without holding said face still. So – no taser, an instant decision by the officer on scene, if he even had one: and correct.

Next, pepper spray. Now, would YOU spray pepper in the face of a man with no face? Because the eating was still in progress, you know. Bad man’s face right there with faceless man’s. No, you wouldn’t do that. Another instant decision.

Leg shooting? No help here, the guy isn’t running away! What would sudden, non-lethal injury do to him? Not much other than perhaps cause more damage to the victim.

Not suggested: going up and grabbing the guy’s leg to drag him away, after repeated commands to cease and desist were ignored. Um. You’d really have to have balls of steel to do this, and a lot of back up in case the assailant turned on you. A uniform and bulletproof vest isn’t going to help against someone willing and able to tear off another’s face with his own teeth. The idea would have crossed my mind, were I the officer on the scene -but I’m pretty sure that sort of risk is discouraged in training. It’s really, really risky and not guaranteed to help the victim at all, and actually might put not only the cop but any bystanders at risk if the assailant escapes.

Baton/nightstick blows? Again, no – you’d have to get too close, and the risk to yourself and the victim is too great. No guarantee it would work, either – and in the meantime, someone is being eaten alive right in front of your eyes.

Clearly the guy is nuts, NO ONE does that sort of thing. So, he’s nuts…not in his right mind and probably not deserving to die for it. No one else deserved to be hurt or killed either. I think his only recourse was shooting the assailant to death – I can’t say how far apart those four shots were, but if it were me behind the gun, I’d be dammed aware that the last one hadn’t quite done the job and another terrible, horrible, necessary, shot was needed. The other critique I read about the shooting is that the victim and perpetrator were, indeed, face to face – and there was a risk of hitting the victim as well. Maybe, maybe. I can’t recall the last time a cop shot a victim while aiming for the criminal, though I suppose it has happened. If it were me, I’d take the chance – not only as the fastest and most secure way to stop the attack. I’d also be thinking, in the back of my mind: poor fucker, I wouldn’t want to live like that, if I miss it will be doing him a favor.

Not saying that’s a justification. Just saying, ‘if it were me’. I sure as shit would rather die than live with what this man will have to live with – if he lives at all.