I’m tickled pink that Tom loves my hubby’s music enough to do a whole post, with links! Thank you, Tom! The Xmas special is pretty damn good, too 🙂

Update: if the idea of more holiday music (ugh, at this point, right?) doesn’t get you excited, maybe having a gawk at the playlist will?

Hubby’s got another good show tonight! On in just a couple minutes as we haven’t done our time change yet and all is a panic! 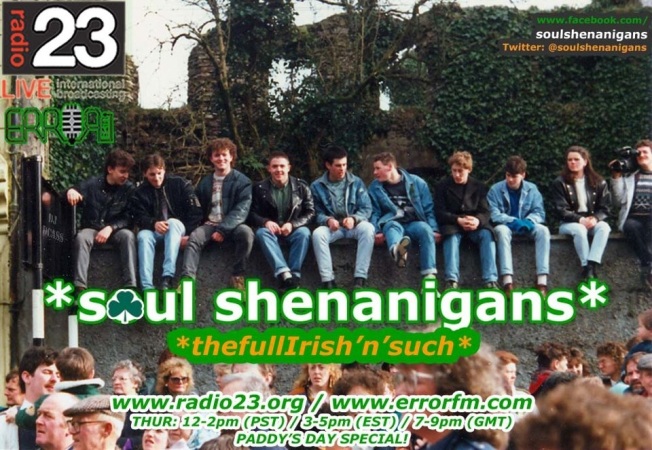 Again, go to Radio23 channel A to tune in, or I’ll be posting the podcast link later on! Thank you.

Edit: the podcast is here.

Hi there all you lovely people!

I rarely do this. But tomorrow is my dearest’s 40th, and tonight is his last Internet radio show as a 30-something! Please come and listen? High listener rates will thrill him to bits, and who wouldn’t want to be thrilled to bits?

If you’re on Facebook you can follow his show “Soul Shenanigans“. That’s good fun as he makes a new poster every week! Look at this week’s:

That’s him, cute and blonde even then.

He’ll be on Channel A, in just about an hour. He’s interactive, too, so you can send him a happy birthday message or tell him he’s an old, out-of-touch fart and to get off your digital airwaves, if you like.

I’m hoping for the former!

EDIT: show is over but available via podcast!

Okay I don’t do this often: that is, promote my hubby’s DJ career. But tonight he’s got another special show that I think at least one of you might be interested in.

Tonight, in about an hour and a half, iDJ will be playing live on the Internet his Beastie Boys special in honour of MCA. Ever wonder where they got all those samples? DJ dcass knows and is sharing tonight. It won’t be all rap and hip hop, or whatever category the Boys fell into (I can’t even say for sure, not being the expert), I promise. It could be very interesting and even open your eyes to the wealth and range of music that the Beastie Boys appreciated and loved enough to use to create new music.

So here’s the info:

This week: Nothing but Beastie Boys Samples in honor of MCA

If you visit, feel free to send him a message and tell him who sent ya! Thanks.

I’ve an almost-earworm tonight, but it’s not the music that is in my head. It’s thinking about a line of the lyrics:

‘When is the last time you did something for the first time?’

This is a line from the song ‘The Trouble with Never’ from the recently released Van Halen album, A Different Kind of Truth. I have it burned onto a CD in the car and I’ve played it over and over – not because I adore it, but because I need several repetitive exposures to new music before I can decide if I like it or not. I know Van Halen isn’t everyone’s cup o’ tea, especially the fabulous Sled, but I love hard rock and VH were sooo good back in 1984 when they released an album by the same name. Eddie Van Halen is a master guitarist, and ‘Diamond Dave’ (David Lee Roth) was so big, blonde, and obnoxious that even despite his mysogynistic tendencies, I just had to like VH. Especially the song ‘Jump’ which I got so excited about one MTV-watching afternoon in ’84 that I danced down the hallway and leapt into my darkened bedroom, where I smashed right through an empty aquarium I’d left in the middle of the floor. I will forever have a long scar on my foot and the memory of sitting down on my bed and watching the white me-meat that used to be covered in my skin well up and begin to drip with blood, and I will forever hear my own worried, wavery voice call, ‘mommmmmm?’ because I knew it wasn’t going to turn out well.

But, I don’t love Van Halen. That was reserved for bands that were much less mainstream back in 1984, like my forever favorites Metallica – they are still around, and still jammin’ – but their current music is nothing like the amazing new sound and sheer powerful energy they had in the early 80’s. And I really miss their instrumentals – Sled, if you’ve never heard it, take a moment to search youtube for Metallica’s ‘Orion’. (I got no clue how to embed a link) Wow. And still my favourite of theirs, after all these years.

Back to the topic at hand.

I’m not a terribly positive person. I know this, and I don’t like knowing this about myself very much, but all the not-liking does for me is make me feel even more negative. So, I attempt to surround myself with people who aren’t irritated by my negativity; like Socks, or my hubby who can usually be broken out of his occasional bad mood by something as simple and as silly as a fart-joke; or even other bloggers, who might have a down day but usually use the medium to spread happy thoughts like Disney fairy-dust.

So, when I found myself really thinking about the line, ‘When is the last time you did something for the first time?’ I was a little surprised to realise that I do just about everything for the first time, every day. And I usually know it. For example, I’m well aware that I’ve never written these words in this order, and I know that I’ve never hoped that people I’ve never met might respond and feel something – anything – due to what I’m saying about this topic. I’ve never sat here and written a blog post while listening to iDJ work up a dance set in the hopes that he gets a spot on an Irish broadcast radio station instead of the (two!) international Internet stations he is played on.

I’ve never asked someone who loves Wagner to listen to Metallica. I’m a bit afraid with that one! I have so much respect for Sled – someone I’ve never met – that I’d be sad and a bit ashamed if she hated one of my favourite songs! How odd! How NEW!

Perhaps I’m a ‘change’ addict, like my cat Spot. If he is, it’s my fault. I’ve never lived in one house as long as this since I was a child. I’ve never held any job longer than five years. I’ve never kept a partner longer than four years, until I met iDJ. (yep, he’s that special. I need to tell him so more often! I’m glad that I’ve reminded myself of this.)

In any case I’m taking it as a positive thing that I know when I’m doing something new, and that I am continuously appreciating the new and that I’m noticing, and savouring, the moment. Even when it is something as simple as hearing a song I’ve heard several times before, but this time I actually hear the words and realise I’m a better person than I expected.

“The Trouble With Never” (abbreviated version, chopped by moi)

You often wonder, you want to know.
How deep does the rabbit hole go?

I know you never thought about it
but ask yourself later:
When you turn on your stereo
does it return the favor?