First and most dear to me – thank you so very much for donations! Y’all know I think I’m tough, but every time I saw an email notification I started to cry. I am getting emotional again thinking about your amazing generosity! I really cannot thank you enough. If there is anything I can do for you, I will!

I went to work yesterday, on a day off, to spend as much time as I could with the clowder.

I didn’t take many pictures. I was too involved with watching them interact and simply being at peace, with no time clock ticking in my head saying I had to go. I’m not one of those people who feel as if a phone has to be in my hand to record real life instead of experiencing it myself.

One of my close friends has fallen in love with the black one. She has named him Toto, Orsetto Toto (Teddy Bear – she is Italian). She can’t take him as she already has six cats – some fosters – in her two bedroom home. 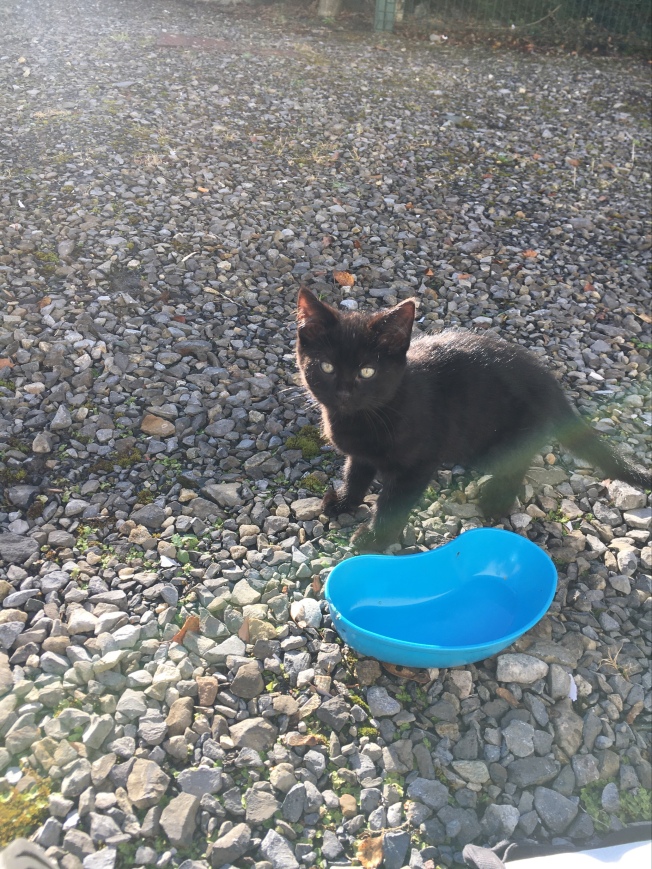 I have fallen in love with the goopy-eyed one, and have named him Jupiter. He looks so much better now! Maybe it was finally getting some nutritious food that helped him heal. He is definitely a he: I was able to get a cheeky sneak peek under his tail yesterday! 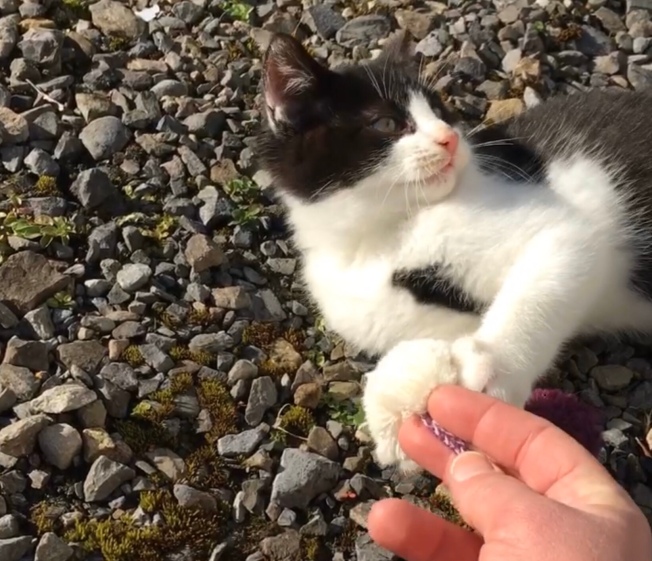 I had to take a screenshot of the video of him just to get a picture for you. I don’t think I can add video here without the mental work than I’m not capable of right now.

So, I’m worried for them and a bit sad that I can’t see them until Tuesday, when the rescue operation will take place.

And… I think I counted a seventh kitten yesterday! I’m now thinking maybe some of these babies are Vickie’s? Some of them look smaller and are definitely more timid than the rest. Vickie is so skittish that I can’t tell if she is nursing or not. I’m very sure Piggy Peggy does not have seven teats ‘on the go’, as she lets me rub her belly!

It makes sense if some are Vickie’s. Explains how there were four, then five, six; now seven… please don’t let there be more in hiding!! I’m starting to feel underprepared, and a bit unsure. I must remember I have all week, with no time pressure, and Peggy (and I’m hoping Vickie also) can be spayed and returned in just a few days. Any kittens still hiding will be okay as long as I put food in places that are within close proximity to hiding places.

I can do this.

We got a wee doohickey that means I can now connect the SD card from our ‘real camera’ to the iPad for direct upload. Previously, if I wanted a pic from that camera I had to upload to one of the laptops and email it to myself (not happening), or wait for iDJ to do it and steal the pics from his FB page. Now that I’m in control, I’ll probably be out of control and you’ll be seeing more photographic posts. Sorry if they are boring.

I’ve uploaded a ton of pics to the iPad now, and the first ones I’d like to share are of the kitten I found, rescued and delivered to the Mayo SPCA last month. 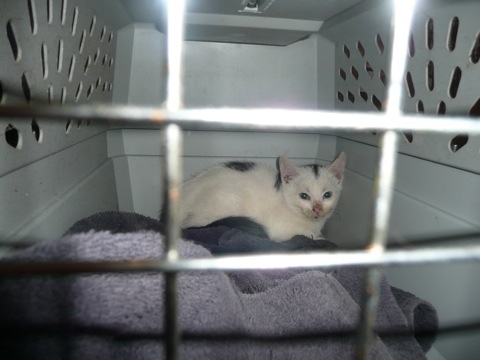 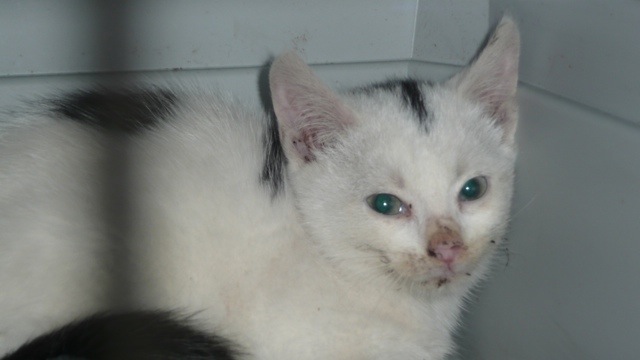 These are the only two pictures I have of him. He was so filthy, but had cleaned himself by morning. He looked a lot better, but was still stained brown on his nose and paws. I wonder if he found a home.

I felt I should include an update on the kitten I rescued yesterday. He was pretty good until about 3am, then the mewing started. I have earplugs in my nightstand, and was not slow to use them. Hubby either didn’t know I had another pair, or was too scared of waking me up to ask for them. So, he got NO sleep – up at least 4 times, culminating in him sleeping on the couch with a huge, heavy pillow over his head. He said at one point, he went into the spare room and lay on the floor with his pillow for 15 mins trying to make kitty feel better. Aw.

Neither of our cats or the dog got any sleep either, they were too excited by the odd noises from behind the closed door.

I started getting up for kitten around 6. Got him more food and water, as he’d spilled the water. It didn’t help, he spilled it again. I got him a new clean, dry towel next – a good idea as he finally had peed on the one in the cage. The next time, I gave him a little stuffed toy for comfort; one I didn’t mind having to throw away if it turned out the little guy had something contagious. The last time I went in, I poked a dowel rod through the bars and gently stroked his head and back, and that did the trick. He was lonely. Not so very feral, then. Good.

He also looked better. He’d taken the time to clean his little face of the dirt that had accumulated. His nose and paws were still stained a bit brown from being outside so long, but the pink now showed through. A cat that cleans itself is a healthy cat, another good sign. No snot or eye-boogers, either. Yay!

Hubby was nearly late to work from sleeping through the alarm on his phone and being exhausted. I said he could have the car to make it on time, and I’d walk up later and get it, as I wasn’t awake enough to drive yet. I got the car around 10:15, came home and packed up kitten for the trip to the vet, about 30 mins away.

Got there no problem; kitten was silent, staring at my face the whole trip. The Dr said he was a he (I knew it, from the screaming & neediness – not a judgement on men, just male cats), and he didn’t have the nasty fatal disease they were worried about. Ears eyes nose & mouth looked good too, but he had a sore hip from an unknown altercation. A little painkiller shot, and now what do I do with him, sir? Well, they had no room to store him for pick up, so I could take him back home and schedule a pick up, or take him to Ballyhaunis myself. I said I’d be glad to take him, if I knew where it was. They were too stupid to offer to tell me, so I didn’t bother to ask – the directions would have been suspect. No answer at the MSPCA cattery, either, but I left my mobile no.

I started back home, and realised I was to pass our vet’s office. I stopped in to ask if they knew where the cattery was, nearly gave him away to another customer, and got a call back from the SPCA. Whew. Got my directions, on my way!

Had one panic and had to call the hubby for help – Ballyhaunis wasn’t signposted at a dead end T-junction. After one bad turn from iDJ’s also highly suspect directions, I found the place, and as per their request, rang to say I was there.

A lovely lady cradling a tiny terrier of some sort inside her fleece jacket greeted me and took me into the cat area, where I deposited the little guy into a much bigger cage containing three other kittens of his age. He did go and hide, but no hissing or growling. I gave some love to the two kittens that were asking for some, and then it was time to go.

I had been given some kitten food last night, so I donated that to the shelter along with a big box of unopened dog biscuits that our girl can’t have due to her allergies. I was never made to feel bad or guilty for bringing them another cat – and they have a lot, this is a no-kill shelter – and I was given some gently hinted ideas for helping them raise donations. Everything was clean: there was no odor or mess, and it was obvious the animals are loved, even in their dozens. How hard, so very hard, to do that job. I would fall in love every day, over and over.

The way I fell in love yesterday with a blue eyed white kitten with grey streaks on his head, back and tail. Yes, I’m crying now. Please don’t tell anyone.

I caught a mostly feral kitten this eve. He was screaming non stop, and when I talked back, he started following me. So I got him to follow me home, into the house, and trapped the wee thing in a towel. I only got bitten once but it sounded like I was killing him. He’s in a cage, in a closed room my indoor, pampered boys aren’t allowed into. Called the SPCA as I cannot keep him. To a vet in the late morning to see if he is sick, if he’s fine then the SPCA will take him. If not, goodbye, little guy. Why can’t I be hard enough to turn away? I’m very sad for him already.