I’ve not devoted a post to my little Siamese boy Lokii in a while. Actually, it’s been over a year since “Let’s Meet Lokii” and “Let’s Meet Lokii’s Dark Side”. However, he’s been disgustingly adorable the last few days, (and it’s not even that cold in here!) so I was forced by cuteness to take a few pics.

First, a shot from Monday, when he was helping me watch a David Attenborough documentary on predators and prey. I’ve never caught him really watching TV like this before (but he is fascinated with iPad games, not even the ones made for cats). Not sure if it’s the size of the new screen, or the lions on it that got him so interested.

Wednesday night, Lokii came to bed with me. I always curl up on my left, with my iPad open to an e-book propped against hubby’s pillow. He Lokii-poked to get under the covers, and curled against my chest with his head under my chin and, as it happened, his whole head in my right hand. He fell asleep, purring, and after a while the purring dropped into silence. Then…a while later…a faint rumble started again. Neither he nor I had moved or made a sound – it was just him waking up a tiny bit and realising where he was and who he was with. That’s cat love for sure, and it gave me a much needed happy feeling after a hard day. (Apologies to Cats n Co for pretty much reposting my comment on her blog on ‘Do Cats Love?‘)

Thursday we had a really, really hot fire going. Too hot for me, but just about right for the heat-seeking Si-missile that is Lokii-mon. He was so happy sprawling in different directions on my legs that I couldn’t conceive of getting up to get a better camera. Sadly, these pics are all from my ever-present iPad and they are accordingly terrible. Sorry. Hope the cuteness shines thru all the static caused by taking close-ups by firelight!

See? Chin-scratches. Nothing could be better, for him. Me? I had to take this, and the next few pics, with my nose. Yep. One hand is holding the iPad, one is scratching precious kitteh – my nose was my only option! 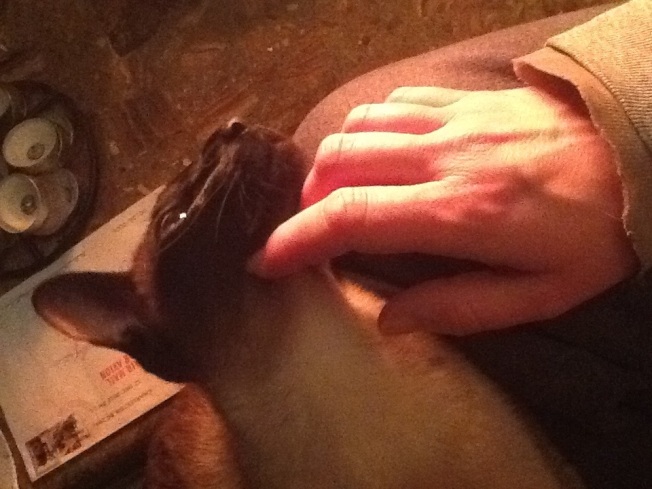 Ooh, that’s nice, we loves a finger in our ear. 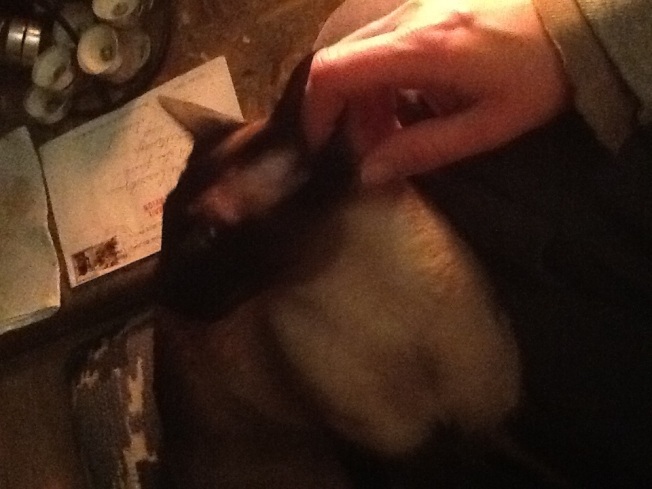 And ear-scrunches from the outside are nice, too!

Who gave you permission to stop with the ear-love? 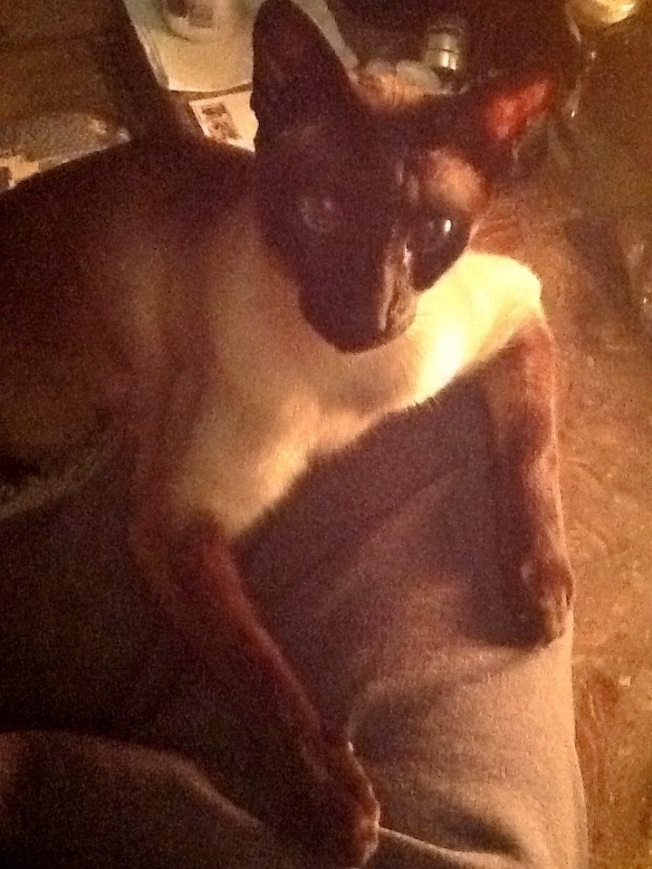 Okay, no more petting…guess I’ll just enjoy this fire instead. 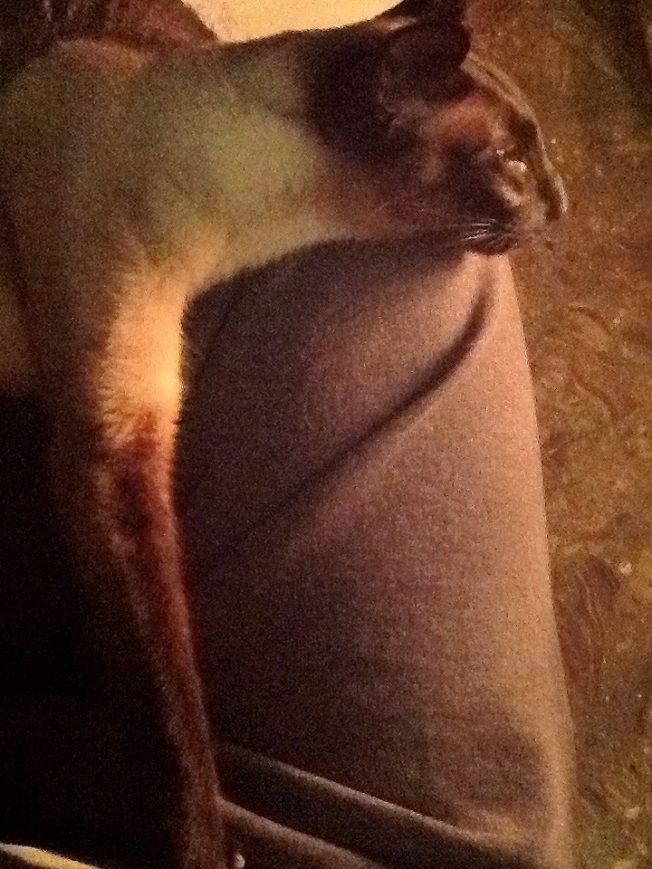 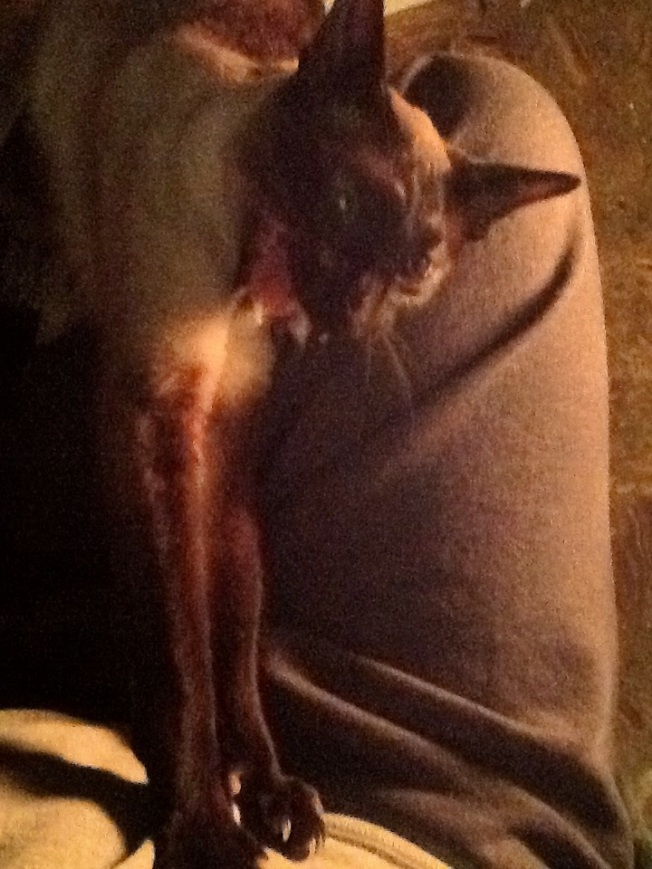 But things are back to normal now. I’ve spent a good part of my Friday evening sewing up the holes he’s chewed in the new dog bed. Sigh. 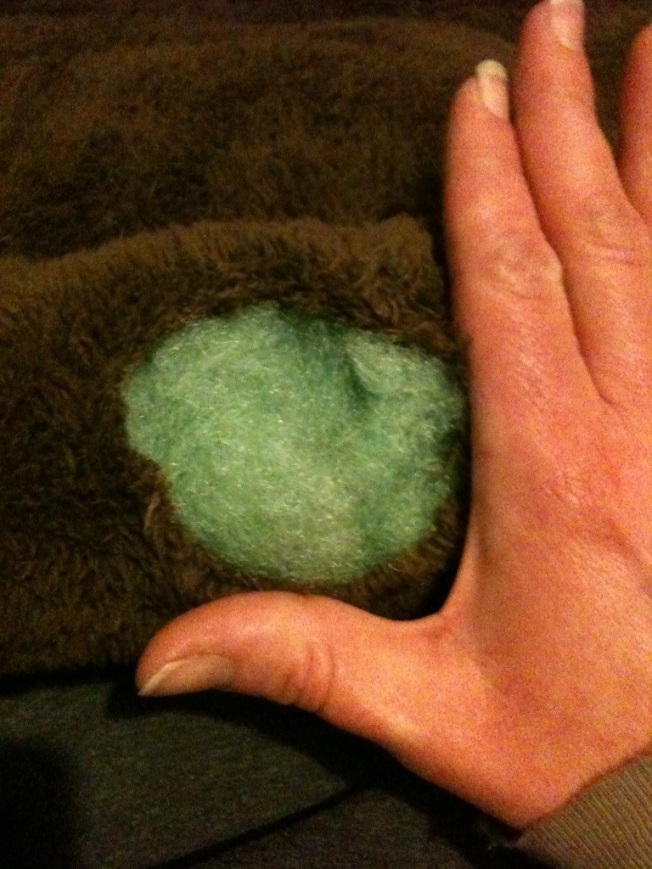 That’s the biggest of dozens of holes I had to sew shut. I need advice! I’m really worried he’s going to get horribly sick from eating fabric. We can’t stop him. Take away one thing, he finds something else. He’s really great at listening, remembering, and not returning to the scene of the crime again when we say NO! (ok, I say, as I’m the observant one) but he is also good at making sure he never hears ‘no’ in the first place. There’s no blockage in his guts – yet – but I don’t want there to be one.

How can such a smart kitty be so damn dumb?