Crap. Not much is going green for me out of the load of seeds I started. I have one tomato plant, one mystery gourd, five sunflowers, and a load of cornflowers. My cosmos did next to nothing – think I have five plants total, all white (yawn), and only about half of my corn grew – and it is tiny, weak and probably dying as I type. Sigh. It’s just been cold, windy, rainy, and grey.

But. Hubby bought me these back in March, and I finally got them all planted out. I love that they all look like alien spacecraft from Babylon 5. 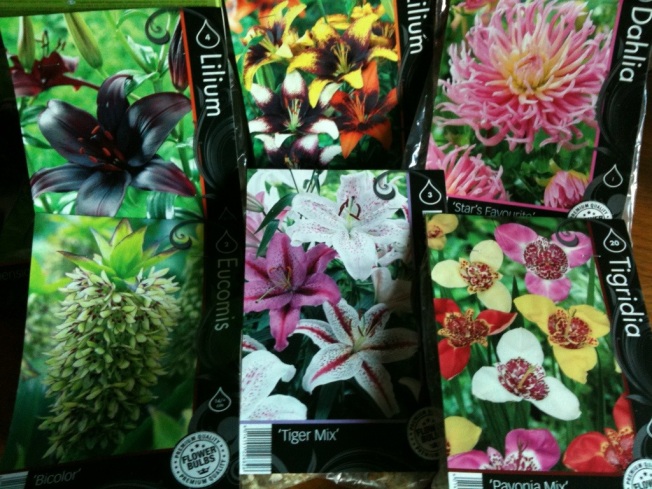 Kinda late for some, but I got the gorgeous black lilies in right away and they are coming up nicely.

That thing behind them is a weed – a weed, I tell you – that I planted on purpose. It has daisy-like flowers and hubby likes those. So there. Right out on my front step, a huge-ass weed in a pot. Heheh.

More from the March collection – obviously not lilies but I forget what I put where. I was in a hurry. Do you see the Siamese in the background? My sister painted that for our mother decades ago, he’s concrete. Starting to look a bit rough around the edges, but still makes visitors think there’s a kitty on the stoop.

Here’s another of hubby’s March presents – raspberries! I waited too late to plant them out, so it looks like only two of the SIX he accidentally bought me are going to live. He didn’t realise there were three canes in each package! So I guess two is all he expected anyway.

I planted these last year and I forget what they are. Take two years to bloom apparently, and they are ready to go now! I have a lot of them. 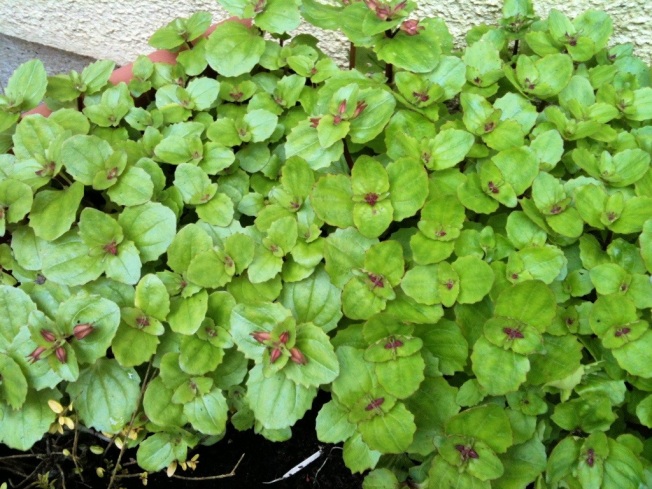 Anyone know what this is? We skip-dived (dumpster-dove, for my US friends) this huge slightly cracked planter around Christmas, and it seems the plants in it came back. Blooming shortly, whatever it is.

Hostas are better this year: I put down slug pellets as soon as they started to come up from their long sleep. Last year I forgot and had to look at holey leaves all year.

My lilac! I’m so thrilled with this green baby. I collected the seed from a bush that lives out front of a mostly-abandoned garage. Started them last year, got three to grow. One didn’t make it to fall, one I thought had died but it started to come back, then died again – but this one is happy. Yay me! Grown from seed on a whim, in seriously wet soil inside a plastic take-out container. I couldn’t even tell for sure that I had collected any seeds, so all three were a gift, even if they didn’t live long. The odd grass is native, dug up from the coast and brought home because I like it. And two of my red sunflowers – how tiny they are, supposed to get several meters tall possibly. Possibly a bad place to plant them? Meh. Also a glimpse of both lavender and rosemary.

We need some colour, all this green and no bloom is getting boring. I moved some of my tulips last year as they aren’t happy where I planted them.

That’s it – just the two. But that’s two more than I got from the ones I didn’t move. Oh, and both of these are in crappy recycled materials pots – one in a container that previously contained salt (from my uncles’ bakery, we stole them out of the recycle bin) and one in a former plastic Celebrations chocolate box. I rarely buy a pot anymore, why bother?

The Stupid Girl planter from last year. Radishes, carrots, rocket, my few straggly pathetic corn stalks. I planted the last five kernels in the packet today, figured what the hell might as well try. It’s been warm, finally.

The broad beans are coming up – if you can see them behind the extraordinarily happy oregano plant. 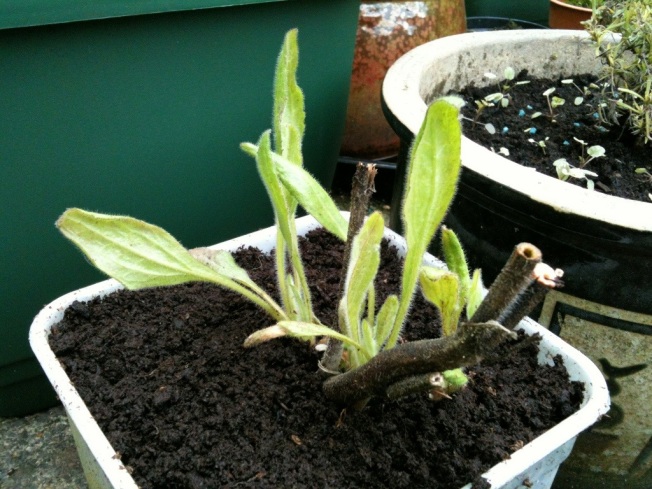 One, one! of my rudbeckia survived the winter. It’s also in one of the former salt-containers. It seems to be happy there! I only have four seedlings this year. It won’t be as orange a garden in 2013, unless the galliardia do well – I think they might.

My ending picture is a very, very welcome surprise. My beloved lavender rose bush. I truly thought it was dead, dead, dead. It was down to the ground a brown twig with no life or leaves (we have black spot bad). Early on I bought Rose Clear and have been spraying my poor roses every two weeks, and doing a just-in-case spray of the dead twig. Looks like it was worth it! Gave it a good bone meal feed and trimmed all that grass back so it gets some sunshine. I have hope again!