I’m sitting here on my arse in front of the fire, as I do. Goofing off online, as we all do. My Siamese Lokii always hangs out with me when the fire is lit, because it’s a fire and he’s a Siamese. Wee sleekit heatseeking missiles, them Siameses.

Anyhoo, I was checking my email. And there was a comment from my blog-friend Minlit! Well, for some reason Lokii was fascinated with her simple, black circle Gravitar image. So he stuck his nose on it. Apparently kitty-noses work like people-fingers, as Minlit’s Gravitar page opened right up in Safari. How cute! Of course then the black circle was a lot larger, so he tried to touch it with his paw a few times, hoping it would move.

He got bored, and I went back to my mailbox. Instantly he touched the circle and we were back to Safari again. Left paw on the screen, pat pat pat. Ha! So I opened up my one and only ‘cat game’ for iPad (it was free, and it kinda sucks). He proceeded to ignore it entirely. Sigh.

I got off my arse and got my phone, so I could take a pic of him in case he went after the Gravitar again. Sat back down, opened my mail… Nothing. Little bastard!

I’m stubborn, however. And I found out that if I wobbled the iPad on my leg, he thought what was on the screen was moving. Hehehe:

Lokes managed to open the page in Safari a third time, good boy! 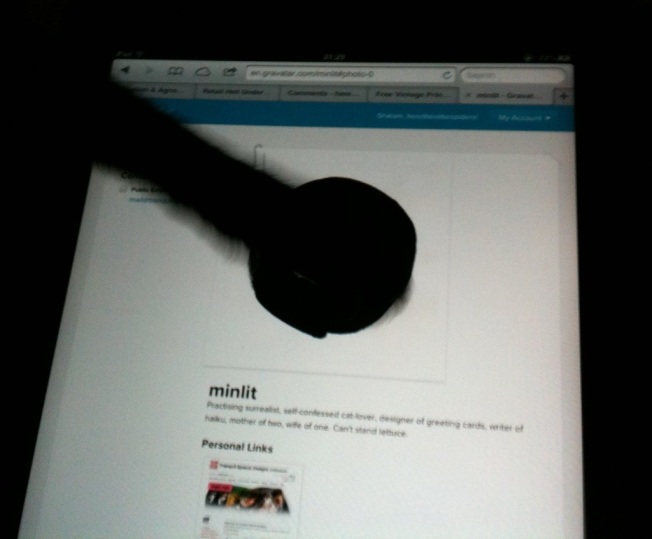 And that’s my excitement for the night.