I learned that the chicken processing factory that I drive by twice a day smells worse, now that it is cold, than it ever did on the hottest days this summer. Gag.

I learned that the dog’s nails are way too long. But I have yet to do anything about that. 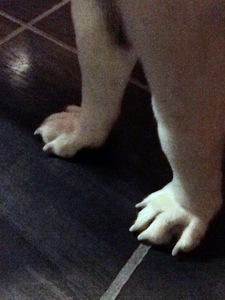 I learned that I really, really need to check between my toes before getting in the bathtub, especially when it’s cold and I’ve been wearing socks constantly. I haven’t learned just what socks I might own that are full of magenta fluff, but it wasn’t easy picking it all out of the water.

I learned it was past time to bring in the big rain umbrella for the winter. It didn’t go flying over to the neighbours, but it might have smashed up one of my blueberry bushes. It’s too nasty out there for me to tell how much damage, if any, was done.

I’ve learned that I don’t care for the Lemony Snicket books. Bummer. Yes, I know they are for kids, but I wouldn’t have liked them as a child, either. I don’t like the style and I don’t like the author constantly interrupting the story to define ‘big words.’ And if you are going to have children invent things, maybe have them invent things that might actually work? Heating up fire tongs to white hot in an oven that won’t close all the way, then carrying the tongs in one oven-gloved hand while climbing down a rope for two hours to use it to melt steel bars? Ugh.

I’ve learned that I’m so lazy, I poured beer on the cat to shut him up. And it worked. I wouldn’t get up to fetch some water to dump on him instead (he’s on to that trick, anyhow). And I might be about to do it again if he doesn’t shut the hell up.

I learned that burning inedible bits of an orange in the fireplace does not make the room smell nice.

I learned that eating an orange while using an iPad is a messy mistake.

I learned that somehow, after blogging over a year, I wasn’t signing up for email updates on all the other blogs I follow. Durr. Sorry, I really wasn’t being an ass, I was being…an arse.

I learned that the toenails on my left foot grow faster than the ones on my right. This came about because I also learned I’m too lazy to take off the polish from the summer. I trimmed my nails and noticed that there’s more still left on my right foot.

I learned that I can hang two shirts in the hot press to dry faster. Sweet! (The hot press is Irish term for the little closet that has the house’s hot water tank in it. And usually all of the linens and towels. That’s your Irish lesson for the day: now I’ve taught something, too!)

I’ve learned that hubby will wash the halogen oven, as long as I wash the metal grate that the food sits on. Win-win for both of us! I hate cleaning the bowl and he hates cleaning the grate.