So, I could have died last week. It wasn’t close, really – but it could have been, if I were as bad of a driver as my opponent.

Here’s the scene, as photographed the next day. This is the road I take to work every day, which is now a drive forever ruined by having to watch for a particular shitty grey station wagon… 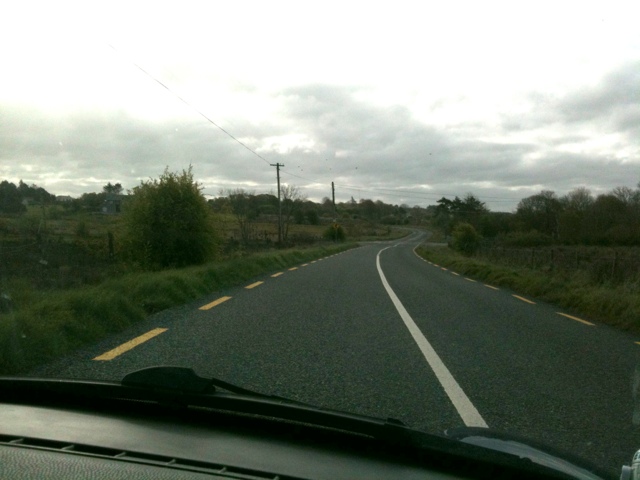 Nice and big, and brighter that it was in reality as it was yet another grey morning.

That’s where it leads – hard to see with all the vegetation. Like how I drew a yellow line, as if that road actually has any lines at all? 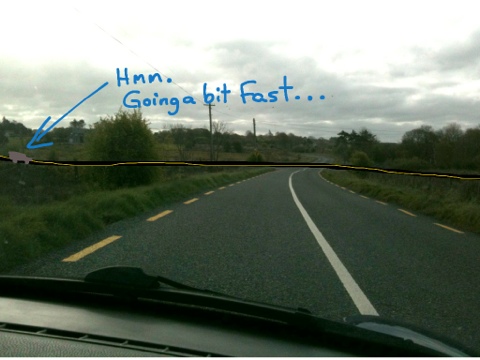 My attention was caught by a little grey station wagon rolling toward the intersection from the left. They weren’t really coming fast. I just had a feeling. But still, plenty of time for them to slow down before the intersection. But I kept my eye on them just in case.

They didn’t slow down. At all. Well, maybe a little bit, before they turned left on to the main road right in front of me. I was considerably closer by now – because I was doing 70 FUCKING MILES AN HOUR DOWNHILL. That’s about 100 FUCKING KPH DOWNHILL for my European readers. My little grey nemesis was doing about 20MPH. 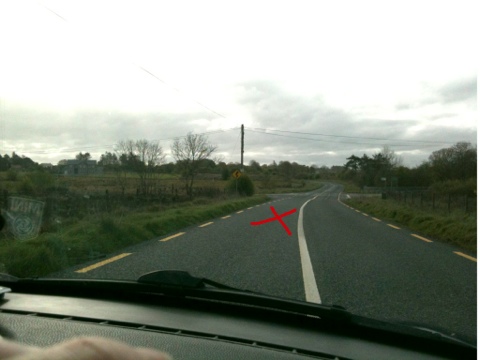 X marks the spot where I was 100% sure they were not looking or stopping and I had to slam on the brakes. Not much time, but if I hadn’t been watching the little fucker I’d now be part of a Mini-sandwich.

My instinct wasn’t to hit the horn; my hands were busy making sure I didn’t lose control. A horn would have been too little too late at any rate. So, my massive ire had to be redirected into making it dammed clear that I was passing her – by now, I was close enough to know it was a her, with a him in the passenger seat – at the earliest opportunity. Which as predicted by that ‘bendy road ahead’ sign, wasn’t going to be right away. She made it worse by not even doing the speed limit or even trying to go faster to make up for slowing me down so much. Grrrrrrrr.

Until, of course, the way was clear for me to pass and THEN SHE SPEEDS UP. Just so my angry glaring face would be only a blur as I sped past mouthing insults at her, her car, her man friend, her ancestors and her children.

Then she slowed soooo far down that I could barely see her car behind me as she stopped in the middle of the road to DROP HER KID OFF FOR SCHOOL.

It almost would have been worth the wreck if I could have lived but taken out her whole gene pool.