The short story: Socks is the nickname of my best friend, and she is having her first baby. Since I can’t be there with her, I’m chronicling her journey on my blog.

Long story: go here, then here, and the rest are my (sometimes) weekly updates: one, two, three, four, five, six, and seven. That will catch you up to now!

This week we have pictures to prove the belly growth again! Socks thoughtfully provided me with her current ‘bump’ photo, this time headless as I freaked her out entirely by making her head a lime last time. Oops! Just so you know, m’dear, I can chop your head off on my iPad, too. No need to do it yourself!

She also included the last pic, so we can see how big Button has gotten. 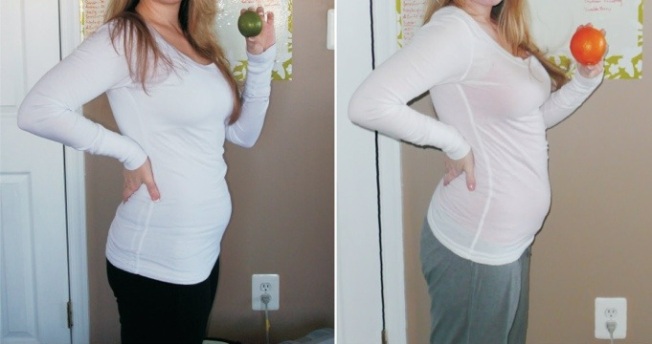 I doubt she’ll be fitting into that shirt for much longer! Unless its reeeelllly stretchy! She’s outgrown all of her jeans already. She’s not like me and got rid of all her ‘fat pants.’ I don’t care enough to keep up with my diet usually – although I certainly will once the holidays are over, I feel like a walrus at the moment – so I save my fat pants for my fat months. Anyhoo, she’s not a hoarder or a cheapskate like me so had to go buy new jeans. Or just wear sweats around the house. Thbbbt. In any case she’s only gained three pounds (1.36kilos).

The biggest news this week is that she’s finally announced to the world about Button! I don’t have to keep the secret any longer, yay! Of course I told people in Ireland, because they met her once, and I had to tell someone! But I don’t have to be so circumspect on FB any longer. I’m sure I’ll keep the habit out of, well, habit, for a while. She sent out ultrasound pics with her Christmas cards (not to everyone, of course – didn’t she say she sends 80 cards?). I’m dying to hear some of the surprised reactions from people who have just found out!

One who was not surprised is her mother. Because she’s been waiting…
I learned that MommaSocks bought, in 1989, six 16×20 inch (approx 41x51cm) laminated Beatrix Potter posters. Socks was 12 and too old for Ms. Potter. So who were they for, and why does Momma still have them stored flat after 22 years and four house moves? Why, for her future grandbabies, of course! OMG. I think I would have sewn myself shut if someone was plotting out the future tenants of my uterus when I wasn’t even a teen yet! Socks sure has a lot of patience.

Her doc freaked her out a bit last week though, just by being super-hyper and zooming around the room. This doc didn’t want to believe the last doc’s opinion that Button is a week further along, and didn’t even have the reports to hand (probably left them on the counter at Starbucks when she picked up that triple expresso). Quote of the week from Socks: ‘Whatever, let them duke it out.’

Socks also had a good conversation with the doc about ‘birthing options.’ Now, some might think this is a bit early; but she’s a planner, and as she said she doesn’t know anyone locally with babies or who is pregnant, so she needs to know what her options are and where to find help if she needs it – like finding a doula. No, I didn’t know what that was, either. I kinda guessed, though. There is a nice, private-room birthing centre right at her doctor’s office, and she likes all of them there, and they very seriously told her that they are not a ’boutique’ office that does a Caesarian section just because mommy doesn’t want stretchmarks or a loose coochie. It is really good to know that a C-section is a last resort for Socks and the docs. Quote of the week from the doc: ‘But we will if we have to, because you can’t stay pregnant forever.’

The last bit we both found interesting is that sometimes a hospital will take the baby to the nursery right away. And when they do, they feed it… either formula or water. Weird. So Socks is making a request in advance to ensure Button stays with her so the breast feeding is the first meal of the day.

Which will be fun, because she’s allowed an enormous audience in the room, should she so desire – hubby plus four others! Since we doubt Bear will be able to stay vertical in the delivery room, maybe there’s a place for me…