It appears Neeks is about back to normal. She’s sure hungry. Tonight she gets her kibble again, but I think we’ll hold off on any treats for a bit. Even though the vet said her one carrot a day habit was a really good choice as a treat. I’m just nervous about giving her anything other than straight dog kibble. Mostly because she hasn’t pooped since her case of the runs on Tuesday. I know she was wrung dry, and then had a 24 hour fast, but three days of rice and fish should have produced something by now, shouldn’t it? Especially when three scoops of kibble and one carrot turns into at least two massive piles per day. If my knee hadn’t decided to act up, I would have taken her on a long walk today to try and shake a poo out of her.
Oh, the pill dosage is correct: they didn’t have a dosage large enough for her (she weighs 34kilos/75lbs, which is small for an Akita) so he gave us two different sizes of Flagyl.
She still seems a little sleepy, but she has asked to play a few times.

On a happy note, she had a ‘letter to Santa’ published over on Rumpydog’s blog. I did my best to give her a really obvious Irish accent – she is from Galway, after all. Although ‘schnow’ is more of a Mayo pronunciation of snow… Oh! And we did get a little dusting of the white schtuff yesterday! Not enough to take her out on the bog to play, though – the turf isn’t frozen and that stuff is black. Not the best look on a white-legged dog! 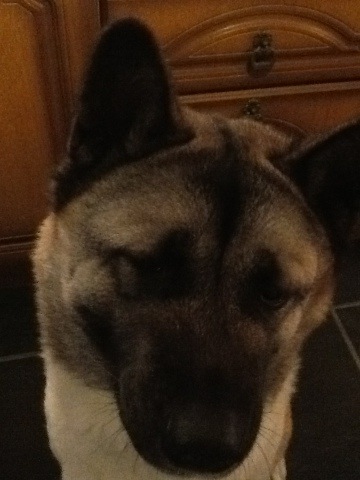