iDJ is off work this week. We’d rather he wasn’t, but as a reward for his company doing the best out of a large group of companies, everyone is forced to take one week a month off. This means unemployment also known as the dole, or in Cockney rhyming slang: the rock and roll. He’s been taking his week as holiday pay so he gets a full pay check. Sorry, cheque. Ugh, I don’t think I’ll ever get used to that spelling. It’s not like we are going anywhere on holidays, after all.

Last time he was off, he learned just how little gets done in a full day at home. Made me feel a bit better. This week, he’s trying to be more productive. It didn’t hurt that he found me already hard at it when he woke up yesterday. I think it put him into work-mode.

He cut the grass. It looks worse now than it did before. Hacked, wet, and uneven. Bare patches of mud that had been covered by the blowing blades are now uncovered by the mowing blades. Even the mower itself was embarrassed by the job it did, and tried to hide at the scene of the crime. 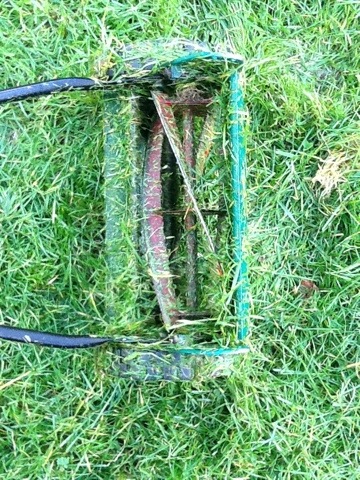 Yuck. I cleaned it off and tried to console it: the grass was too wet, you did your best, not your fault. Then I repeated my platitudes to iDJ, but I think I felt more sorry for the mower.

Then, since it was nice out, he decided to grill. Out came the Weber for pre-cleaning.

Oh dear lord, what in the hell happened here? It’s been so damp this year that fuzzy grey mold was growing inside the grill. Not just on the grate, but on the unused charcoal. Barfola, as we said in the eighties. I’m very happy this is his toy and I didn’t have to help, other than fetching a bucket of hot water and a scrubber, and to bitch when he spilled filthy muck on the concrete instead of into the drain.

I think he got it going by five, and by then it was getting pretty dark. I hid inside next to the fire while he cooked. Sorry, dear, I’m not freezing my tookus off just to give moral support. It was cold enough that he put on fingerless gloves, and dark enough that he couldn’t see the smoke drifting up. He smoked his eyes. Repeatedly. Until they were blood-red.

Which meant funtime for me, as I had to administer the eyedrops. He gets freaky when you go near his eyes. It was easier to give the dog eyedrops when she needed them. She didn’t struggle or whine nearly as much.