I’ve managed to get my oldest and tiniest orchid to bloom again this year. It cost me €.50 and came in a nice purple votive candleholder. I figured that even if it died, I’d have a candleholder. 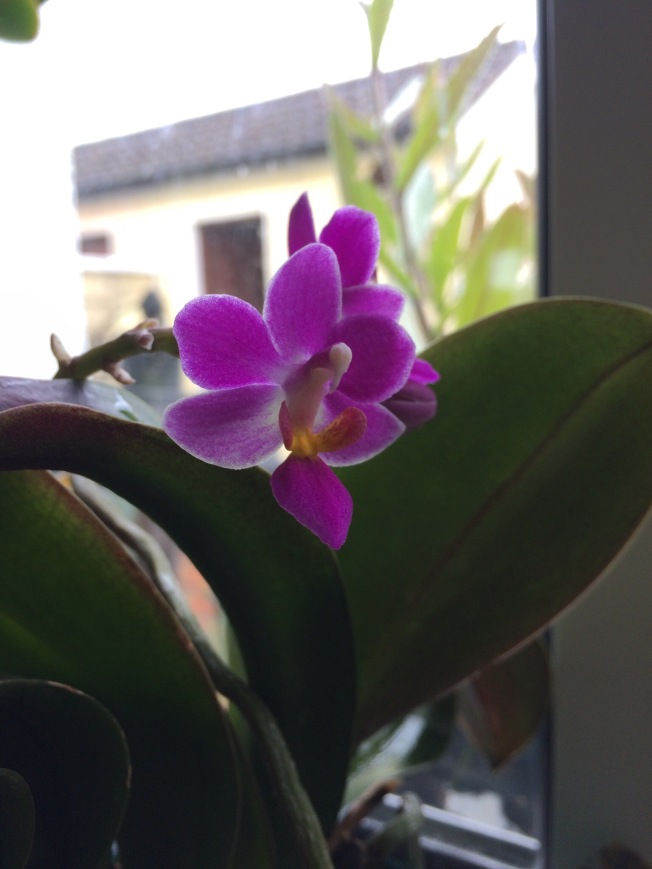 The blooms are about thumbnail sized! Very damn hard to photograph.

I’ve got two others still in bloom, and more spikes up and coming. 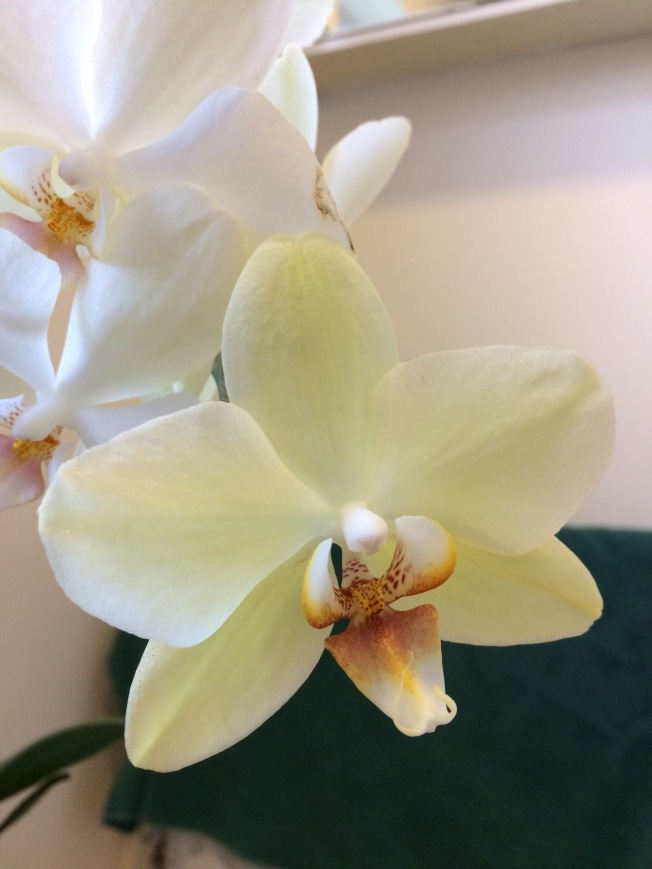 Looks more yellow when the blooms are fresh. Also dammed hard to photograph. 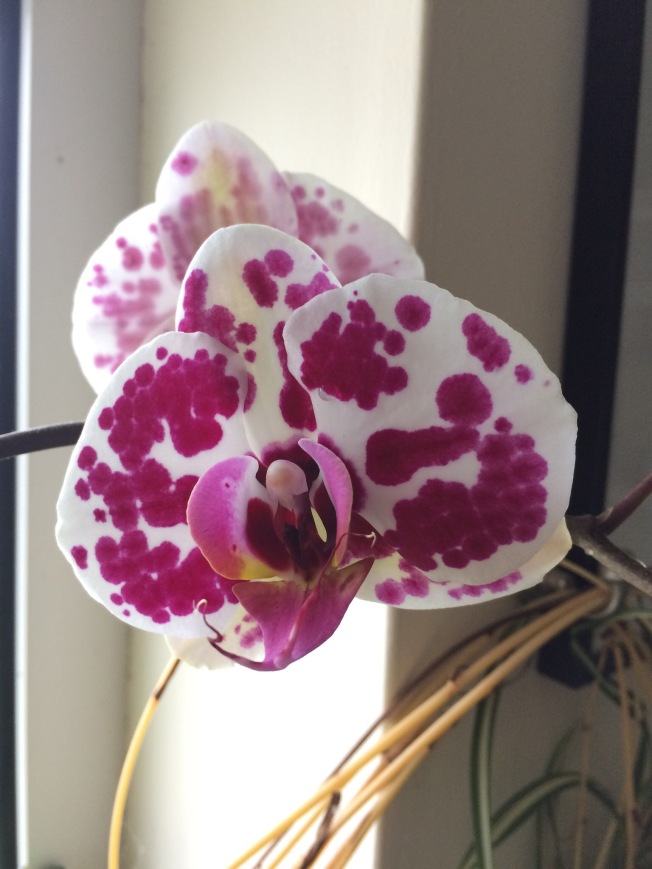 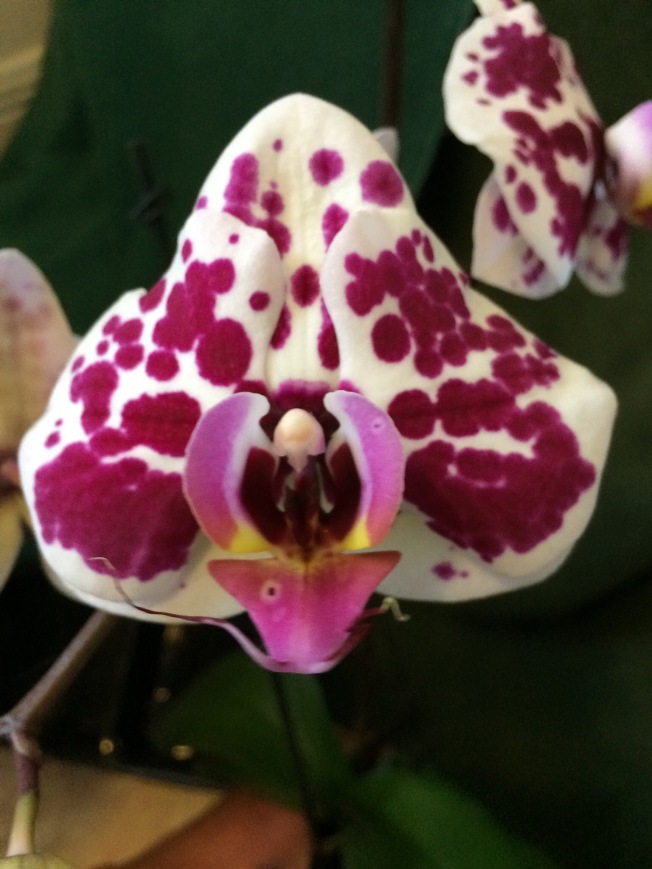 Likely my favourite. It’s been around a couple of years but I got it going this year!

Hope you enjoyed and sorry for the lack of detail about them. I’m struggling to do fun things lately!

I’m sure you aren’t surprised to learn that I have orchids. Four, at the moment. All bought on super-sale. My oldest one was bought in 2009 for just fifty euro cents. It’s a tiny one (or was) and was ‘potted’ in a glass tea light! That one hasn’t bloomed in a couple of years now, but it is happy and healthy.

My next oldest one sent up a flower spike last year, and like a dammed idiot I tried to train it up straight and snapped it right off. I cried. It is trying again right now, and I am being SO GENTLE this time. But it does have to go up, not sideways! Both of these live on my kitchen window sill, over the sink, so they get lots of attention.

This year hubby got me two new ones. They have been in bloom for months, but the yellow one is starting to fade. Last night I gave all four a good soak in warm water with a bit of fertiliser in it, and while they were in the sink, I finally took some pictures.

Orchids are very, very hard to photograph up close! Especially when using an iPhone. So apologies for bad focus, and my junky kitchen (yes the walls are lavender, I love it). 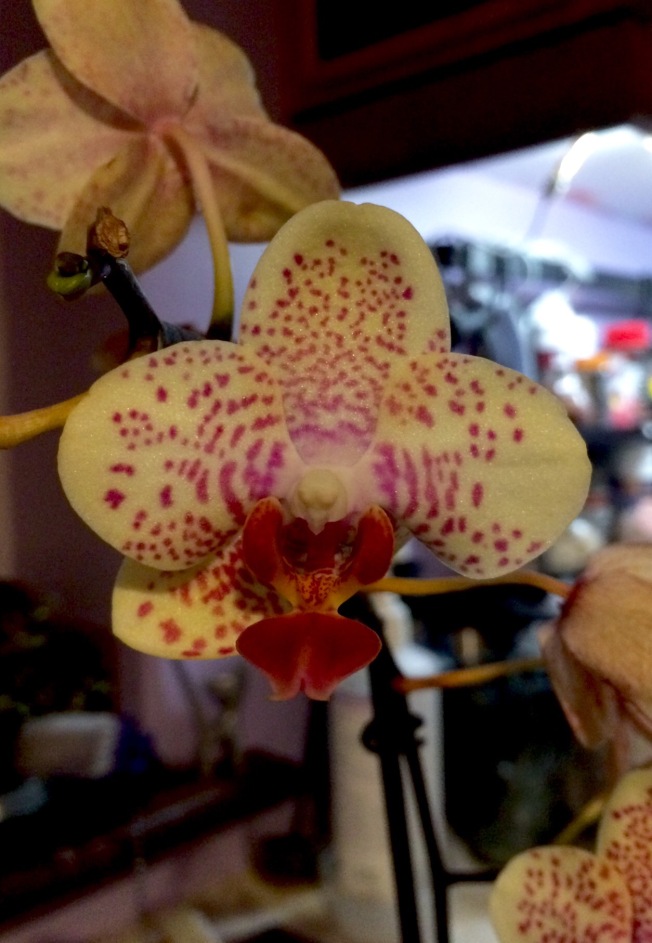 You can see the sad dying flowers in these. Bummer. I really should have taken pictures sooner. Moving it from the front window to the bathroom shocked it too much. But I had to, because…kitten. The bathroom is a much safer place for plants, away from the little monster.

The purple and white one. It’s been in the bathroom since it came home, so it is happy there. I need to repot both of these as they are in ugly clear plastic pots. Also, as they both were mistreated, the potting medium is full of moss and dead roots and in general, smells bad. Musty. Can’t be good for them! I made my own orchid pots before, at a ceramics shop. Got a square bit of greenware and cut round holes all over, for aeration. The roots grow out the holes and all over the place! Next time I’ll share pictures of the older two.