I’ve been holding on to these photos since summer 2012! I wasn’t in a blogging mood then, but it seems I’m getting back into the swing of things.

iDJ and I had driven out to Urlaur Lake, so I could go snorkelling. Unfortunately the place was jam-packed, and there were even two dammed Jet-Ski’s out on the water, rocketing around, scaring the swans and fish. Um, no: I don’t desire to have my underwater magic world soundtracked by whining engines. Plus we had Dogzilla with us, and she is terrified of children – of which there were many.

So we went off in search of something else to do. On the way, I got to experience my first traffic-jam, County Mayo style! 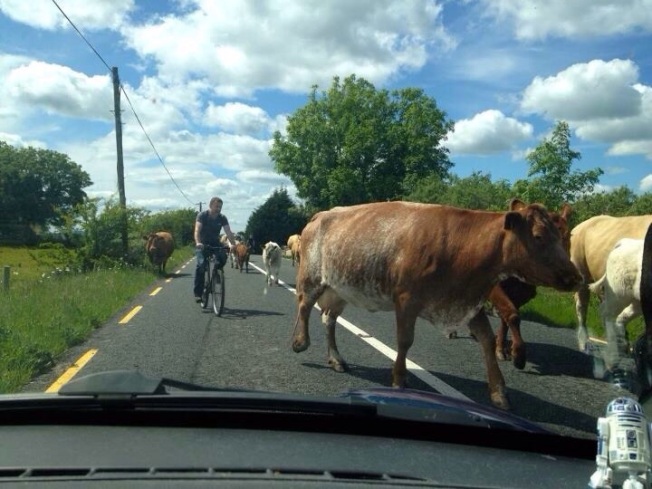 Don’t you just love that the cattle were being moved along by bicycle? The cows are taking up both lanes, too – clearly not too many other cars had been up or down the road recently.

Interesting that the cattle had nearly all moved to the correct side of the road after passing us – except for that one big brown girl who can just barely be seen on the left. She was all about the tasty road-grass.

The white/blue-grey one with the eyeshadow that was giving iDJ the stink-eye was bigger than our Mini Cooper. Yikes.

I was in the passenger seat, repeating ‘ohshitohshitohshit’ under my breath, while smiling like crazy at the experience of seeing a herd of cattle parting around the car. ‘Don’t knock the wing mirrors off! Please…? Gooood cows, niiiice cows!’ No damage was done to the Mini – unless you count the poop-splatters acquired further up the road.