I have had a lovely, sunny, summery day today. And I did next to nothing. I enjoyed the sunshine; I ate the huge breakfast my hubby cooked; and eventually I did some of the dishes. I’d intended to paint my scavenged trellises a bit more – but only if the hubby could help me remember what odd place I’d left the paint tin. Instead we ended up with a huge crisis in which a tin of clear varnish was not only upside down and opened up and spilled everywhere, but did so inside The Closet Of Doom. Hence things like toolboxes, old paint tins, step stools, work gloves, ironing boards – and our Dyson – were coated liberally with acrylic varnish. Yay! After cleaning that enormous mess up, I no longer had any desire to paint, so I sat and read in the sun for several more hours.

The hardship, the horror. I know, I know.

I had to move out front as there was no more sunshine in the back garden. Now, I grew up in the American south, and it just isn’t done to sit out front of your house and drink a beer unless you qualify as po’ white trash (I am white, what other color trash could I be?), but I get sunshine so rarely that I just had to. My concession to being sort-of-in-public was to take a shower first. Good thing I did, because I just wouldn’t have been respectable enough to listen to my neighbour’s teenage son and his friend – who were conversing a few yards away in his driveway – fart loudly and giggle softly if my hair wasn’t clean.

Eventually, the sun gave up on me and I relocated to the back garden again where iDJ was preparing to have a BBQ and, of course, had the tunes a-goin. I stopped trying to read about serial killers and took pictures of Spot trying to open the sliding glass door with one pathetic kitty-arm: 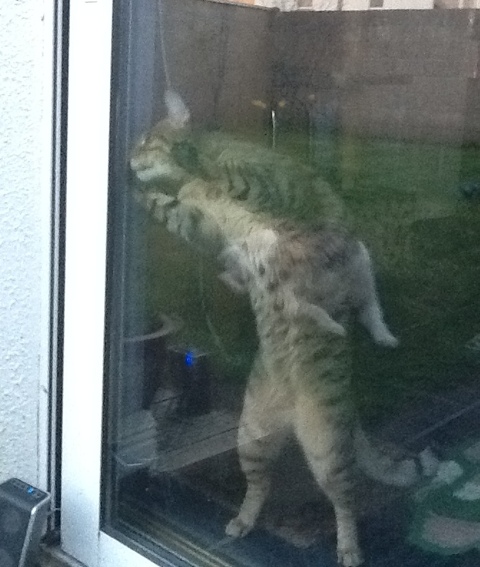 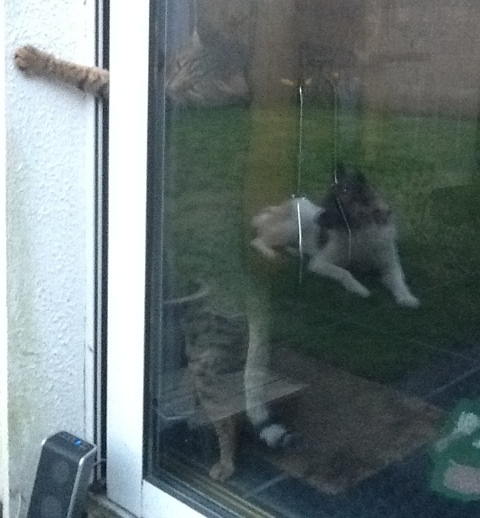 You can’t blame him, really. Both of his people and his dog were outside (see Neko in the reflection?). And because iDJ has to have music allllll the time, the door was open a crack to allow for the speaker-wires. I understand, being a sun-worshiper myself. But I’ll stay in my yard, and he won’t, the bad boy.

Evening ended up with lovely sausages and burgers and me being dead tired but having to get up extra-early for some physiotherapy on my back. Somehow I think a few more hours in the sun would do me a better turn…