Right! Hubby uploaded 118 pictures today to Facebook from his iPhone and our ‘real’ camera, which now has issues of keeping battery contact and dies constantly and is super annoying.

I forgot I even had a camera until the parade was at least half over. So, these are my pics, except for the two I’ll give him credit for – I only really loved two of his 118 enough to steal them, and I think you’ll see why. My pics are mostly rubbish, but I think they give an idea of what it felt like to be in my town on Saturday afternoon.

First – this is from the night before. The pipe band went all around the town playing in each pub (a shorter journey with fewer stops than it was even six years ago, alas). We were at one end of the town – in a pub, of course – and when the band moved on they lined up smartly in the street, be dammed to traffic coming either way, and marched right down the entire town. I don’t know if any photo can convey how surreal and exciting this was for me. ‘Scotland the Brave’ at full volume at ten o o’clock at night is…amazing. From the other gawkers, I wasn’t alone in appreciating their miniature solitary parade.

Parade day! What’s a parade in the whest of Ireland without a big, feic-off-tractor or three? This was the first one, and the reason I remembered I had a camera in my possession. Can you tell we’re standing outside of the same pub as the night before? Oh yeah.

Bet you didn’t expect a helicopter, though! I think – but I’m not sure – that this is the one I’ve been up in. If you’re afraid of flying, or of being on a motorcycle, don’t go up in a wee two-seater whirlybird like this one. I adored my all-too-brief time in (this?) one. 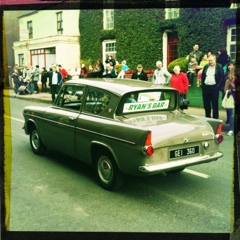 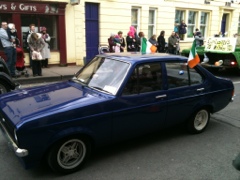 Classic car 4 – and I’m back to black and white as this just was meant to be in B&W. 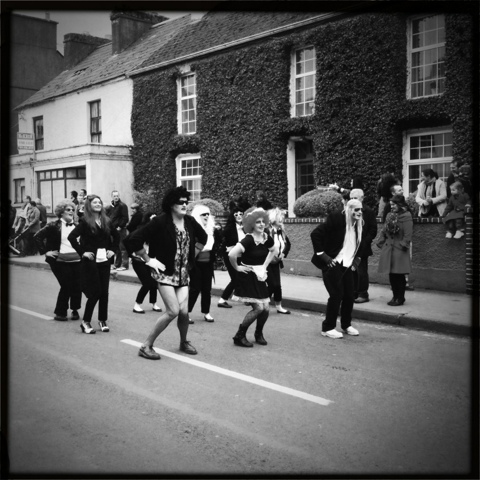 Now we’ll have a compare and contrast. This is my best shot of The Rocky Horror Picture Show cast tribute.

This is the one iDJ took. Damn him!!!