I’m going to do my part for the health and safety of the uncommon person today.

Ever seen one of those infomercials where they make people look reeeely stupid? Like the woman who is in tears over not being able to peel a boiled egg? That’s my hubby trying to use a can opener.

Admittedly, the one I had was an all-metal cheap piece of junk, but he was determined to prove how shitty it was every time he used it. He would use it left handed even though he isn’t a lefty. He’d fight and curse and end up with the lid partway off and soup everywhere. Then he’d twist the lid free, leaving a gnarled needle of tin for me to slash myself on when I washed it later.

We recycle; hence the washing. This is important later.

A few weeks ago, he finally managed to snap the metal in half. I’m sure he gave a cheer and did a little dance, because now he was allowed to buy a new one. One just for him! One he could use left handed, even though he isn’t a lefty!

He came home with a fancy-schmancy white plastic thing that barely looks like a can opener. I had to read the instructions before I could figure out how to use it. It fits over the top of the can, and cuts the lid off from the side, rather than cutting down from above. Okay. It’s annoying, but I’ll get used to it.

The lid is nice and smooth, too – no jagged edges. Nice, I like that. Especially since I am the one who has to wash the damn things for recycling.

But the can itself, however, is a razor-sharp circle of certain injury. I took one look and knew I wouldn’t be sticking my hand inside with a sponge: no way. Good thing I have a brush on a stick.

No worries, then, everyone is happy. Right? Wrong.

We dump all the clean and dry recycles in one big bin, then separate the glass out later on pick-up day. He forgot about the cans.

He bled for about ten hours, but since I insist on him bleeding for at least 12 hours before I will authorise a doctor visit, he had to suffer me pretending to be Nurse.

He lived, he’s fine. Until the next time.

My words of warning: don’t buy this thing unless you want to bleed for ten hours, use a brush on a stick, and read instructions. 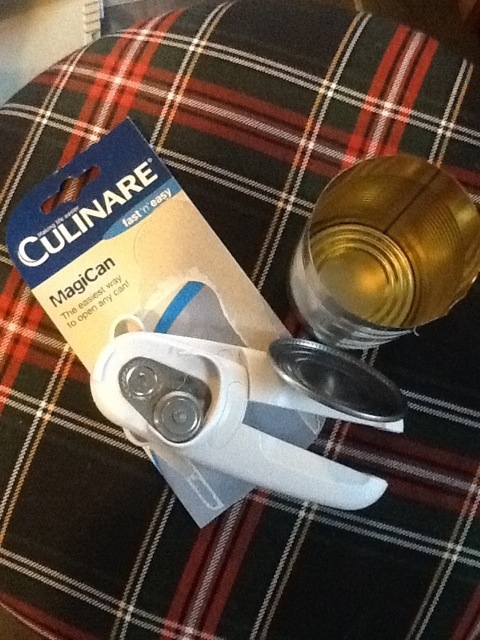