I got all overcome with a poetic impulse at lunch today.

I don’t write poetry! Okay, I have a few times when super stressed and depressed. But I don’t read poetry.

Maybe it would have been a depressing poem. Donno, I didn’t write one. I didn’t have any time to think of lines or wording. Lunch is only 30 minutes and I have to actually concentrate on eating during some of that time, right?

Anyway, I have a spot that I have my little lunch moment in. It’s outside, come rain, come shine, come snow and below zero temps. It’s behind a door, in a corner, where the big air conditioning units are. Cozy, right? ‘My’ spot used to be a few feet away in front of a window, and I’d put my drink and iPad on the sill. But that sill was for a window into a stall of the ladies’ room, and someone told me I scared the crap out of them (literally?) by standing RIGHT THERE and being a big creepy pervy shadow. After that I moved and now hide behind the door with my iPad on top of one of the AC units. Suits me better as the ‘shelf’ is higher, anyway.

Why do I have lunch there? Because I’m anti-social and I don’t want to talk about stupid TV shows in the ‘canteen’ with people I barely know. And I smoke. And I don’t smoke in the car unless it is moving and the window is down. I hate the way it makes my hair and clothes – and the car – smell.

An aside: we hired someone new and when I went to lunch she was outside smoking in my spot. I was not amused. I made sure she saw me reclaim my territory as soon as she moved out of it – and she apologised a few days later. I didn’t even need to pee on anything!

A second aside: people coming out of the door don’t always see me there, even though it is a glass door. As evidenced by the man who came outside and walked off, farting loudly and copiously. Eh. Better out than in, big guy, and I’m sure the woman in your office appreciates that you held all that in. At least there was a good breeze and my only sensory experience of his farts was auditory.

In my usual long winded way, I’m leading up to why I was waxing poetic.

There’s a spiderweb, you see. Oh wait, you can see! 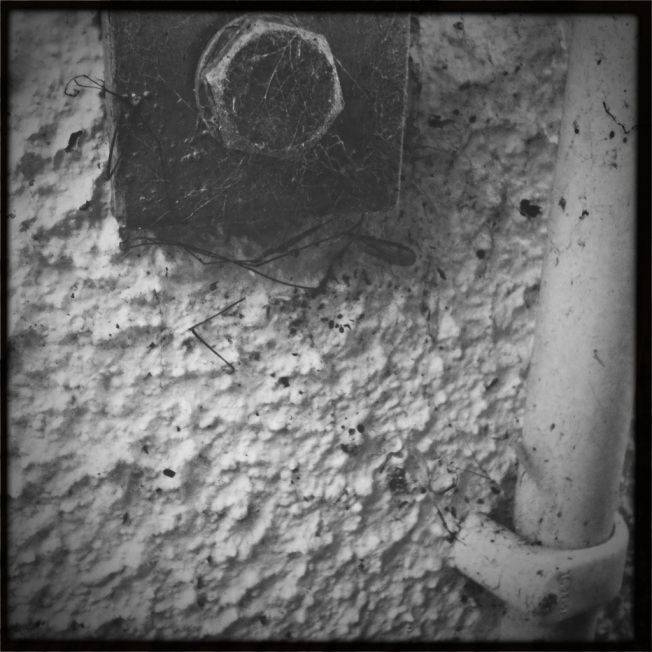 I have looked at this thing at least three times a day, five days a week, for many months. I’ve found that the corpse of the crane fly (daddy longlegs over here, I got no idea why) particularly draws my eye. His legs are scattered and broken, but still stuck fast. I especially notice the one leg that is entirely removed and off to the left of the body. It annoys me that it is out of place, and not with the rest of the shell that used to be a fly. Just sort of a fleeting irritation, but I don’t want to touch it, remove it, duh, it’s a filthy dead bug. And I’m meant to eat with those fingers – and touch my iPad. And the sink is pretty far away.

Not that I actually plot all that out every day… I’m making myself sound more nuts than I am. I look, and look away. The decision was made months ago to leave it be – until today. Today, there was a new bit of…something…stuck to the wall. I just had to pick that whatever it was off the wall. And lo and behold, that one action got me started really, really thinking about the old spiderweb (and blathering about it on the Internet hours later, apparently).

I began drawing correlations between that web and myself: my thoughts, my history, and my future. The dead bugs – are they evocative of bad people in my past that I have managed to break free of? That was my initial idea. Thinking about it now… maybe they are something much darker. Maybe they are the guilt and regret that I feel about the people that I have made use of and then left behind when I moved on. The blown dirt and rubbish stuck there for so long made me think the things in life that have been thrown at me, the ones I was powerless to stop. The cigarette ashes… they are mine, both figuratively and literally. My mistakes, my stupidity, my many years of daily pig-headed obstinacy to keep doing things that are bad for me. That one is easy.

That is one seriously abandoned web. Nobody’s lived there in a while. No one has been tending the strands or cutting loose the detritus. No one cared enough to cut loose the strands that are coated in dirt and useless material – the crud that has blocked the web’s true use, its true purpose. Okay, for a real spider that’s mostly just catching dinner. But on a deeper inspection, it is also a home, a safe haven, and a place of security that a living being worked hard to intentionally create, for the purpose of bringing good and necessary things closer.

Maybe it isn’t poetry, but I think I have a mental image of needed change that finally makes sense to me.

I hope that someday soon I can post a photo of that same place with the useless net of garbage wiped clean and ready for new threads to be woven in place.