I have definite plans to bring the new work-cat home tomorrow and then to the vet Friday morning. Circumstances are perfectly aligned to make it quite manageable, if I can get him into the car…

This was today. Once I stuffed him full of tuna and chicken, he hopped up on my lap, curled into a ball, tucked his head under my jacket and purred. He also has a weird, hitching breathing style that worries me.

He also, unlike Peggy, is absolutely filthy dirty. I rubbed a damp paper towel over his back today, and pure black dirt came off of on the towel. He definitely does not have a clean place to sleep. People might be feeding him, but no one thinks of him as their cat – the main reason I’ve not catnapped Peggy yet. 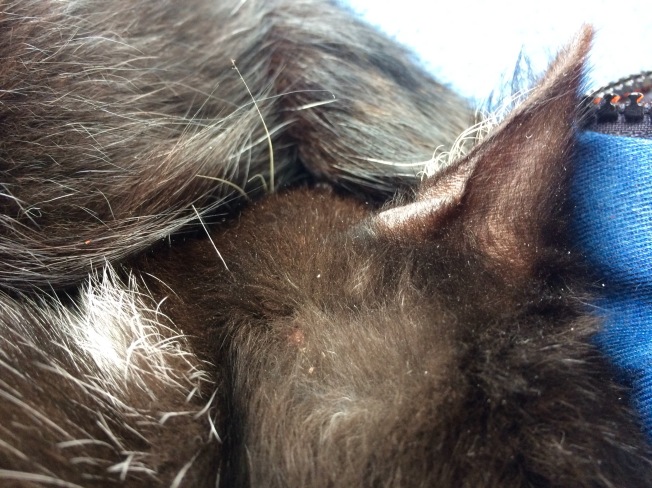 Incredibly dirty and a bit bald around the ears. Also in centre of the frame is a small scab under his ear.  He doesn’t mind me poking at this one.

I know he is a much more desperate case than Peggy. Especially when I noticed he had some difficulty eating today’s chicken. I took the first chance to have a closer look, and yes, he has a swollen left cheek and what looks like an open abscess. I likely encouraged him to rip it open by scratching his head so much yesterday. 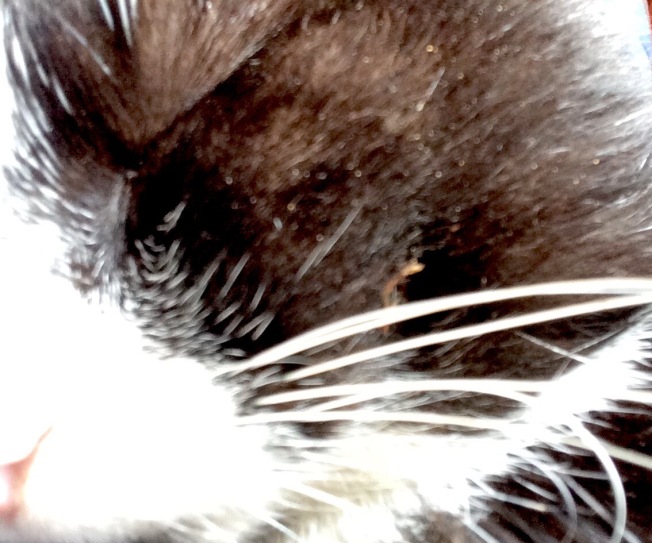 I wasn’t about to grab his face and make him show me the wound, of course. The dark spot is wet fur and the orange crust is likely pus.

The plan tomorrow is to catch him and bring him home, but not inside the house. Maybe in our shed overnight, as small and junky as it is. In the morning, a run to the vet and leave him there with all the info I can give them. Fix the abscess. Worm him. Check on that odd breathing. Neuter him. All of this; if he doesn’t have a horrible, deadly disease that is going to kill him anyway.

After that? I don’t know. I don’t know if I can take him home – hubby points out rightly that one indoor outdoor cat and two indoor only cats will cause havoc. I’ve also realised he is about 1/3 the size of Lumi – like having a housecat meet a Lynx he rightly could be terrified. Of course we have a big dog also, and he could be scared of dogs. And…he knows how to spray to mark territory, I saw him do it in a very inappropriate place. I think being in our house with two other male cats would likely make him pee on everything.

He needs a warm safe place with cuddles and laps, access to the outside, and fewer cars as he has no damn sense around them. I don’t want to see him dead on the road and know I could have prevented it.

I’ve never asked before, but if you want to donate to helping so-far-nameless kitty, you can send a donation via PayPal to my blog email address, heretherebespiders @ gmail . com (spaced it out so maybe the spam bots won’t find me, hahahah).