Oh what a night. Saturday, that is. iDJ and I had to go out to meet a friend. He doesn’t live here all the time, so when he’s home we can’t tell him no. It’s a little hard because we shouldn’t be spending the money we don’t have in the pub. However, it’s such a huge part of Irish culture that not going is an insult.

Luckily, we spent a good few hours at our friend’s place before the pub. We also went back there after closing hours to continue the session. It was the same as the night I turned 40 – everybody dancing in the house, making a mess, having a great time and eating caviar. It was black caviar this time, which I found out I like a lot more than the red. His house is a great place for a house party: no close neighbours to complain, and last winter the house flooded so there’s no carpet to worry about, just concrete.

It was (again) a great mix of people, different ages and different lives. I tell ya, we 40+ ers can really par-tay. It’s almost as if the booze is a stimulant, and we go bonkers when the music starts.

It’s not just us old farts that get down n boogie, though. One of my friends is 24, and she and I were hamming it up in the kitchen. The way I remember it is that she jumped into my arms… I held up for about .0003 seconds, and then down I went. Knees first. On the concrete. Carrying my weight and hers (thank goodness she’s a little thing). She snapped forward and smashed my nose, then backward and smashed her head on the dishwasher.

I was more worried about her. I can be very protective… Once we confirmed that we were both okay, we carried on. I didn’t look at my knees, but my nose was bleeding out of both barrels. Pretty. I’m glad I bothered to put on mascara before we went out.

Having loads of liquid painkiller in me, I didn’t think much of it at the time. Probably didn’t even check to see if I had blood all over my face or not – I don’t think about my looks often. The walk home hurt a lot, though. My knees weren’t happy…

So yeah, I have a blue and red nose, and some gorgeously colourful knees. Especially the left one, it looks like a sunset and is rather swollen. I can’t go down the stairs unless I go backward, it hurts too much the normal way. 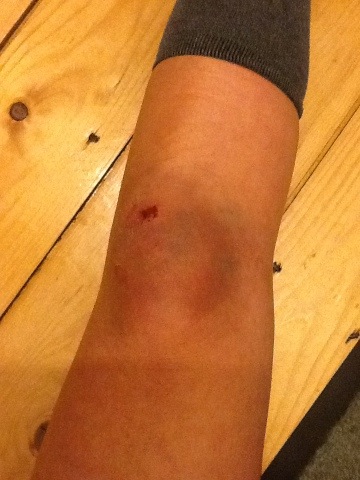